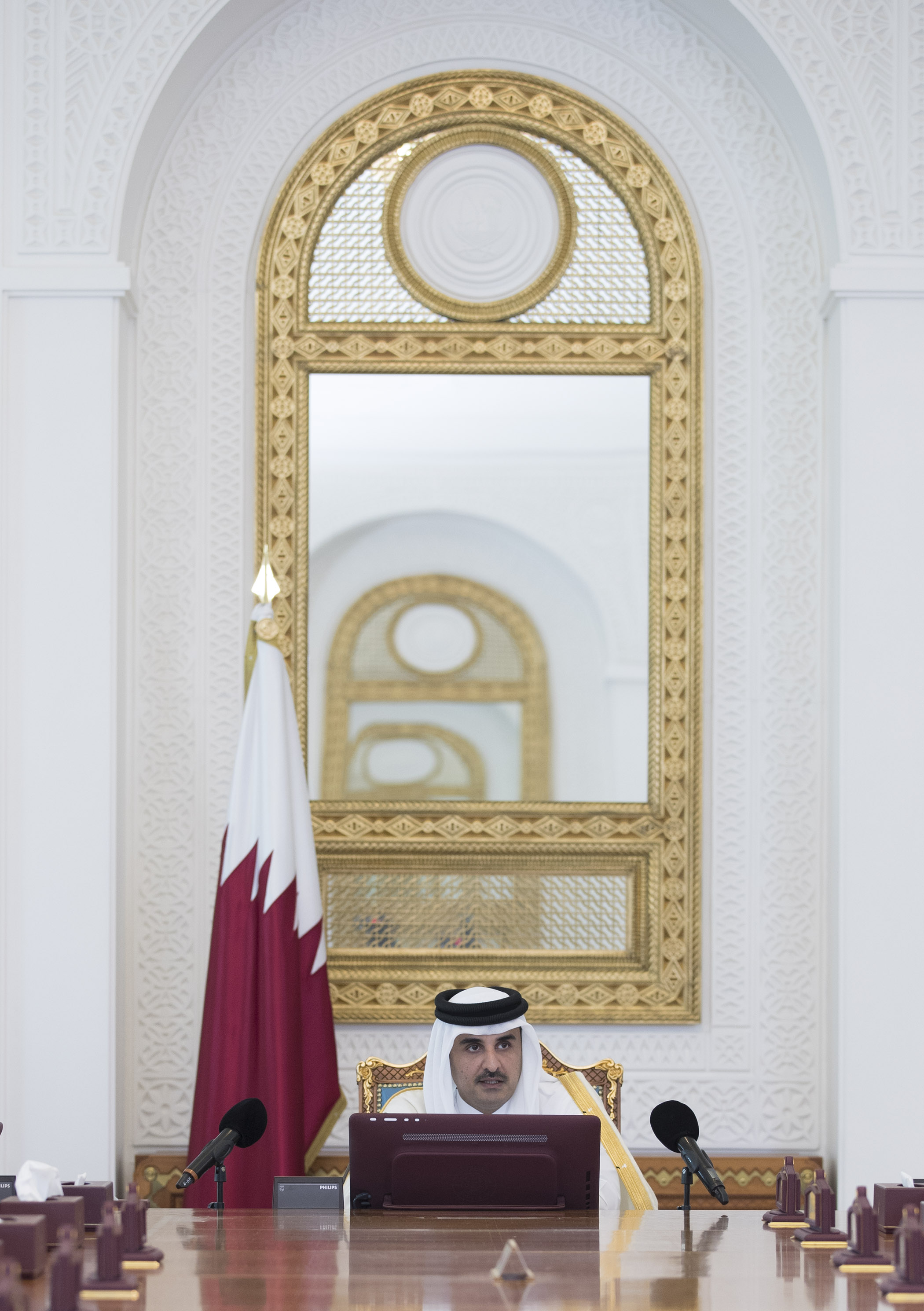 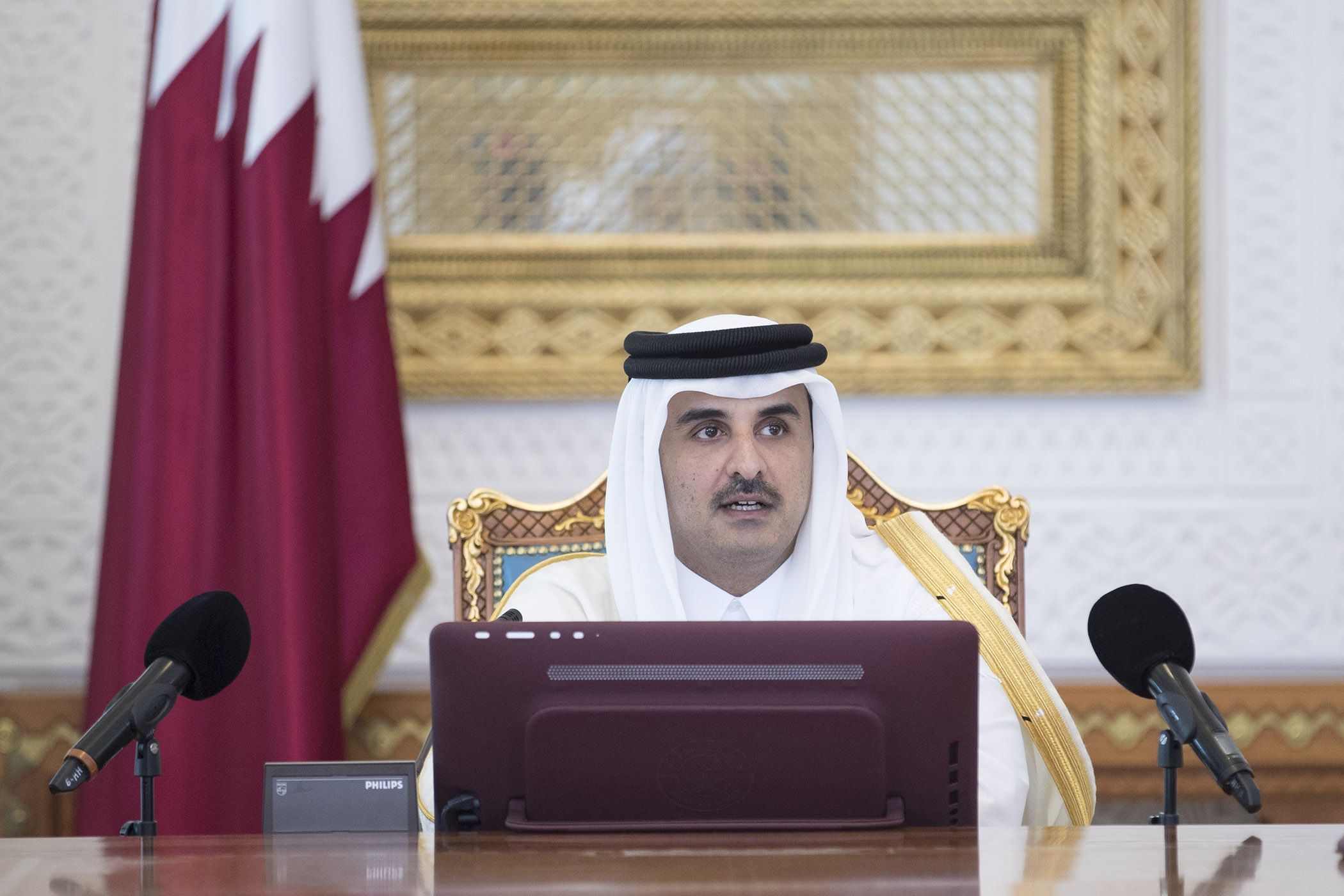 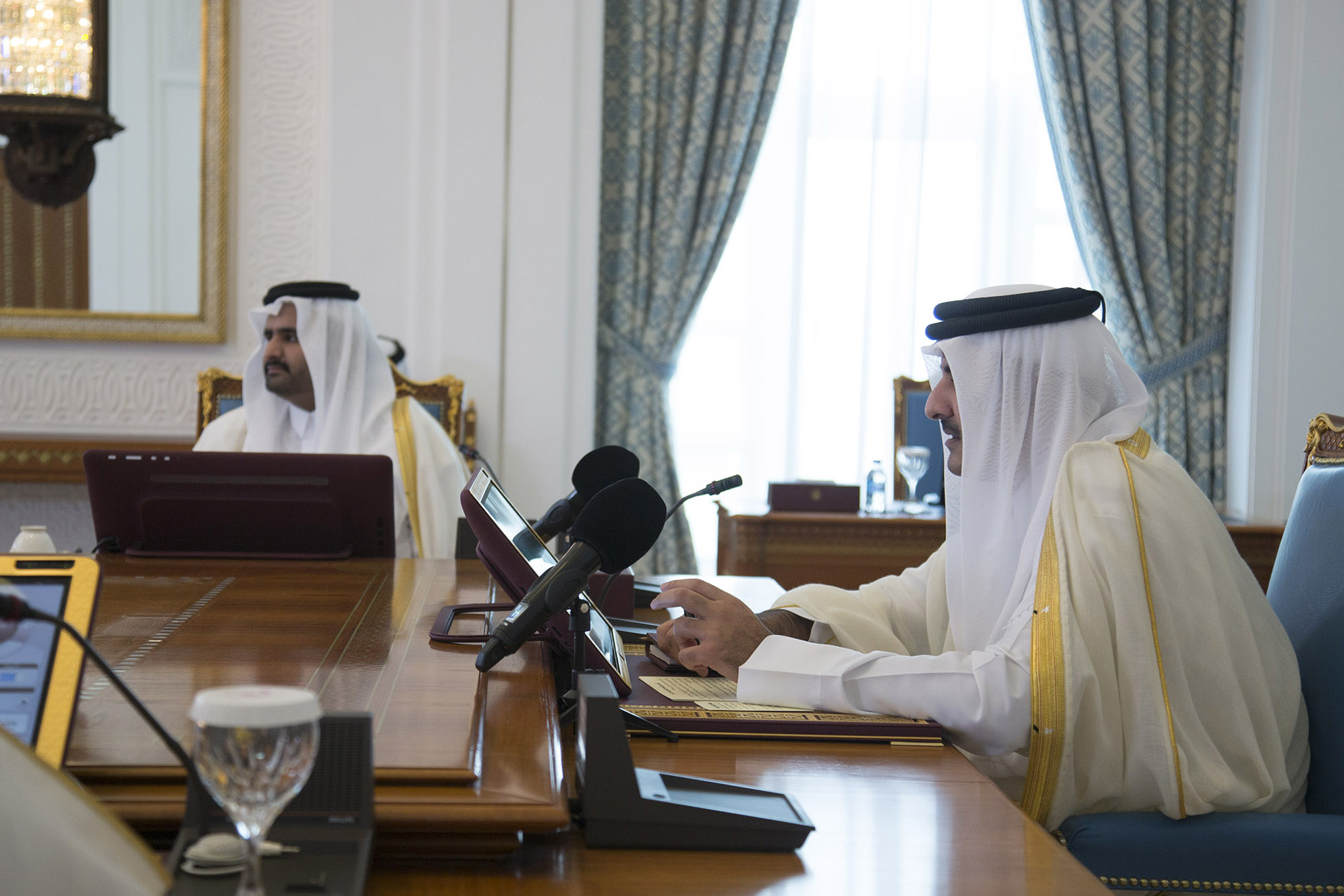 His Highness The Amir Sheikh Tamim bin Hamad Al Thani chaired a part of the cabinet's regular meeting, which was held Wednesday at its Amiri Diwan premises.

At the outset of the meeting, HH The Amir talked about the future directions of the state in light of the current crisis. "To us and to everyone, Qatar in June 2017 is different from Qatar in the past. We are proud of our history, but what happened in June 2017 has strengthened us and pushed us to work more for the country," HH the Amir said.

HH The Amir stressed the importance of the next phase as well as the need to continue progressing towards achieving Qatar National Vision 2030 and implementing Qatar's major development projects at the same pace as before and with the optimum quality expected from Qatar's projects. HH The Amir also stressed the importance of self-reliance in terms of national security, economy, food and medicine.

In his speech to the cabinet, HH The Amir reaffirmed what he said in his address to the citizens and residents of Qatar on July 21, stressing the importance of investing in the positive spirit, solidarity and motivation in giving and achievement, which have characterized Qatar's citizens and residents during the Gulf crisis, in order to become the approach and standard on which Qatar's future work is based.

HH The Amir also stressed the importance of promoting and encouraging the continuity of teamwork and cooperation shown by all the citizen and residents during this stage.

HH The Amir directed the ministers to prioritize the focus on domestic efforts in the coming phase and strengthen the national internal fronts in the economic, security, health and educational fields.

In the field of economy and investment and the importance of diversifying sources of income, HH The Amir directed that the laws related to that field be reviewed and implemented as soon as possible and that spending be rationalized in next year's budget without affecting Qatar's main development projects and their quality.

In this regard, HH The Amir thanked the ministers for their hard work and efforts during the crisis, stressing to them the importance of keeping up the spirit of challenge and achievement so as to accomplish Qatar's policy and future plans to be self-reliant.

HH The Amir reiterated the remarks that he made in his speech regarding the State of Qatar's readiness to resolve the Gulf crisis through dialogue and that if there was an effort to reach an agreement, it should include all parties and with neither dictations nor interference in the national sovereignty and internal affairs of any country.

The cabinet stressed that the clear and wise directives of HH The Amir and the concepts and ideas included in them will act as a working program for the government in the next phase, which requires mobilization of energies and self-reliance.

After that, the cabinet continued its regular session under the chairmanship of HE Prime Minister and Minister of Interior, Sheikh Abdullah bin Nasser bin Khalifa Al Thani, and reviewed topics on the agenda.

The cabinet approved a draft law on the permanent residency identification card. According to the provisions of the bill, the minister of interior may grant a permanent residency ID to a non-Qatari if they meet the conditions specified in the law. Also, a decision by the minister of interior may grant this ID to the children of a Qatari woman married to a non-Qatari as well as those who offered valuable services to the country and people with special capacities that the country needs.

The permanent residency ID carries some privileges for its holder as they receive the same treatment as Qataris in education and healthcare at government institutions, and are given priority behind Qataris in holding public military and civil jobs.

In addition, holders of that ID have the right to property ownership and practicing some commercial businesses without the need to have a Qatari partner, in line with the executive decisions that shall be issued by the cabinet according to the provisions of the law.

A permanent committee shall be established at the Ministry of Interior under the name of the Permanent Residency ID Granting Committee in order to review requests of granting permanent residency ID in line with the provisions of the law.

Meanwhile, the cabinet took the necessary measures to issue a draft law amending some provisions of Decree Law No. 14 of 1993 on passports, after the cabinet reviewed the recommendation of the Advisory Council on the draft law.

Additionally, the cabinet agreed to hold the third round of the Qatari-Bulgarian joint committee on economic cooperation in Sofia on Dec. 4 and 5, 2017.

The cabinet also reviewed a letter by the National Committee for Prohibition of Weapons on the 37th report of the committee's work from Dec. 21, 2016 to April 30, 2017, and took the appropriate decision.