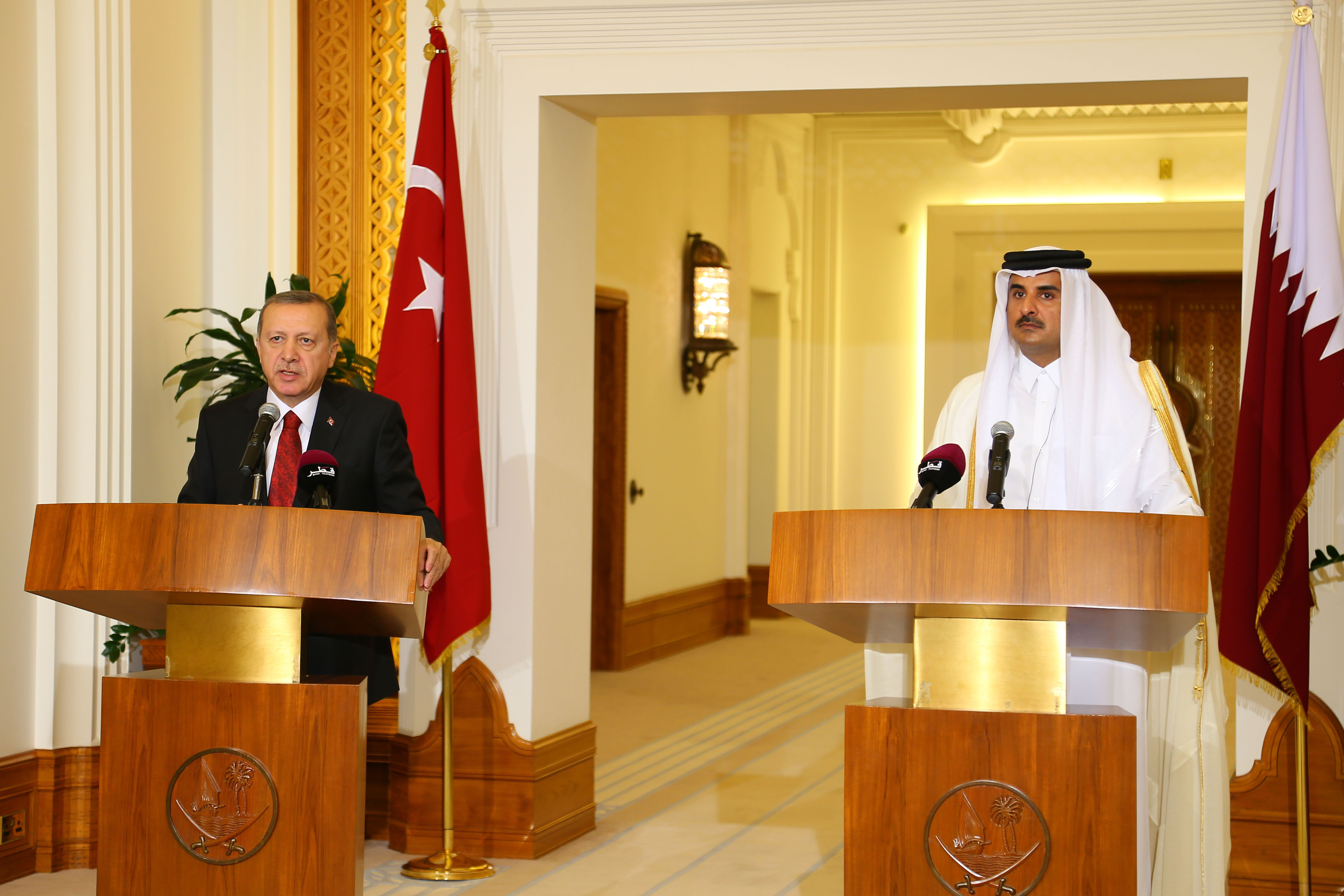 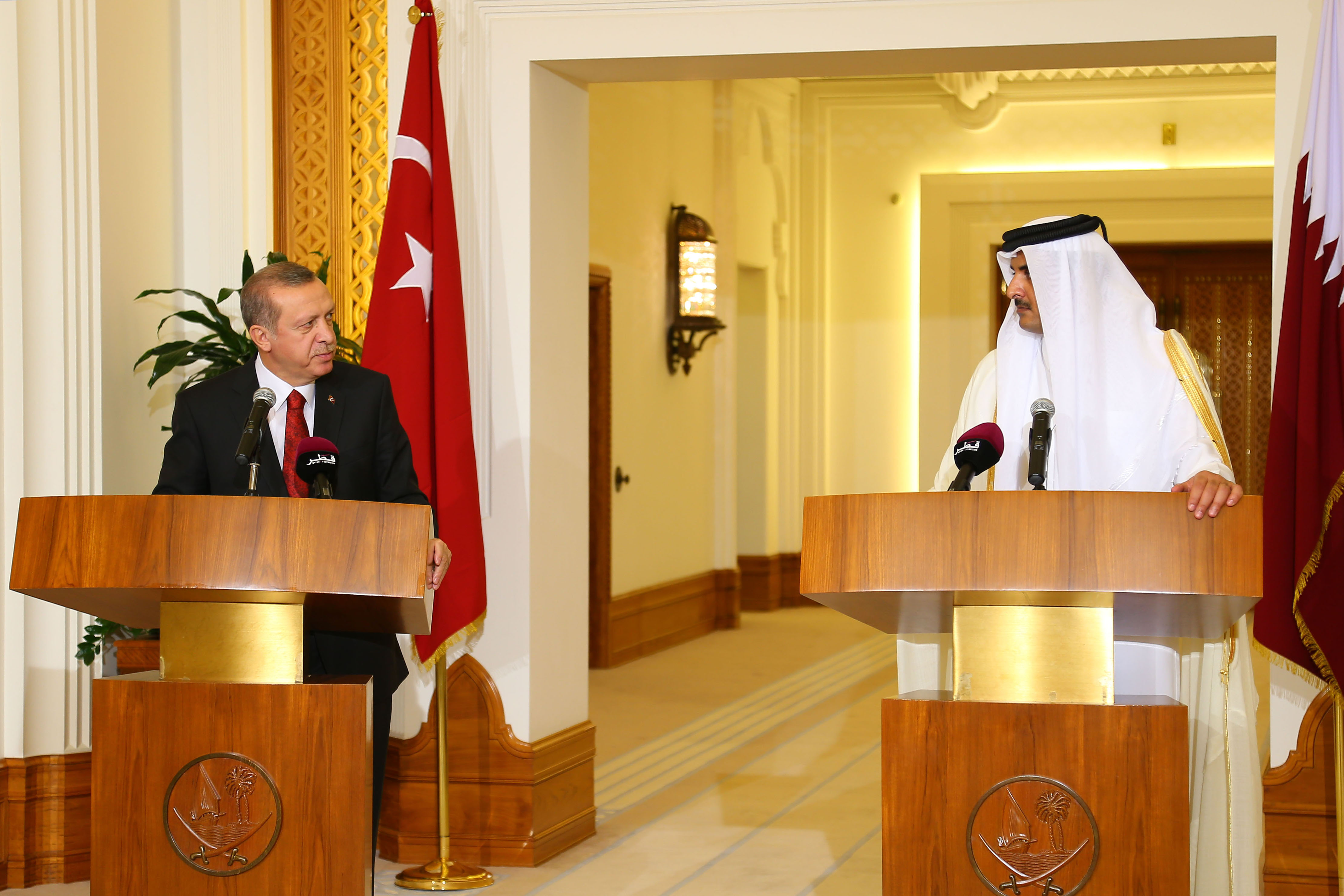 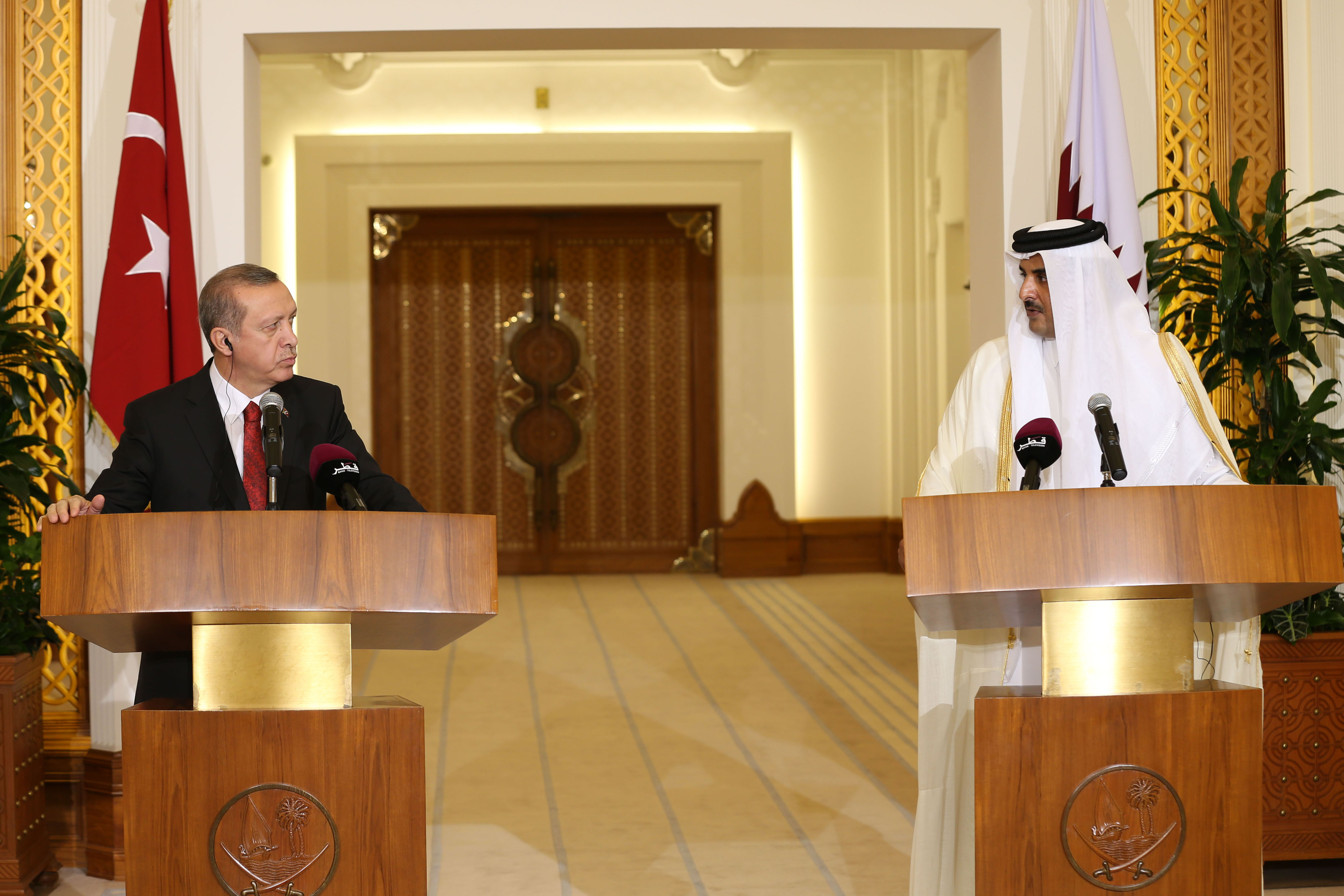 His Highness The Amir Sheikh Tamim bin Hamad Al Thani  has welcomed President Recep Tayyip Erdogan of  the Turkish Republic and expressed pleasure over holding the first meeting of the Qatari-Turkish Supreme Strategic Committee in Qatar.

In a press statement after the meeting held at the Amiri Diwan today, HH The Amir said positions of the State of Qatar and the Republic of Turkey are constant and identical on  issues concerning the region and expressed his appreciation of the Turkish Republic about its firmed  positions towards Arab causes, particularly the Palestinian issue, the main issue for the Arabs, and the Syrian crisis.

HH The Amir added that meeting also dealt with the region's problems, including the spread of the phenomenon of terrorism, and said, "We are all concerned with the fight against terrorism, but must search for the main reason for the emergence of terrorist groups, we all agree that the reason is  the repressive regimes in the region."

The meeting also reviewed hopes of people in the region and in particular the beginning of the Arab Spring in 2011, HH The Amir said, pointing out that young people were full of hopes, but their hopes were thwarted and frustrated.

Concluding, HH The Amir said that the meeting with Turkish President was very distinct where 15 agreements and memoranda of understanding were signed and other agreements will be signed in the future with a view to strengthening the relations between the two countries and in the interest of the two brotherly peoples.

For his part, President Recep Tayyip Erdogan expressed his pleasure over his presence in his second country, Qatar, noting that the meeting had discussed a number of issues related to bilateral relations and regional and international issues.

He added that there would be contacts between all relevant ministers from both countries throughout the year, stressing the need to move into the implementation stages as HH The Amir had pointed hoping that the next meeting will see the fruits of such meetings.

President Erdogan noted that the Turkish-Qatari relations, include trade and investment areas and close cooperation in the cultural field between the two countries is a matter of pride hoping that these relations would develop further, He also said it was agreed to support the bilateral cooperation in the military, financial and economic fields, noting that the two countries stand in a row in the fight against terrorism, stressing his concern over the Palestinian issue and the Syrian crisis.

The Turkish President said the region and the Muslim world were now passing through a very critical stage, especially in Palestine and Syria as well as in a number of areas such as the Arakan, stressing the need for solidarity to overcome such situations. He added: "I believe that Turkey and Qatar are going on toward the future with a steady pace."

He also highlighted the important role of Saudi Arabia, the State of Qatar and the GCC.

The President concluded his statement by expressing his confidence that the Qatari-Turkish Supreme Strategic Committee meeting outcome would be beneficial to both countries.