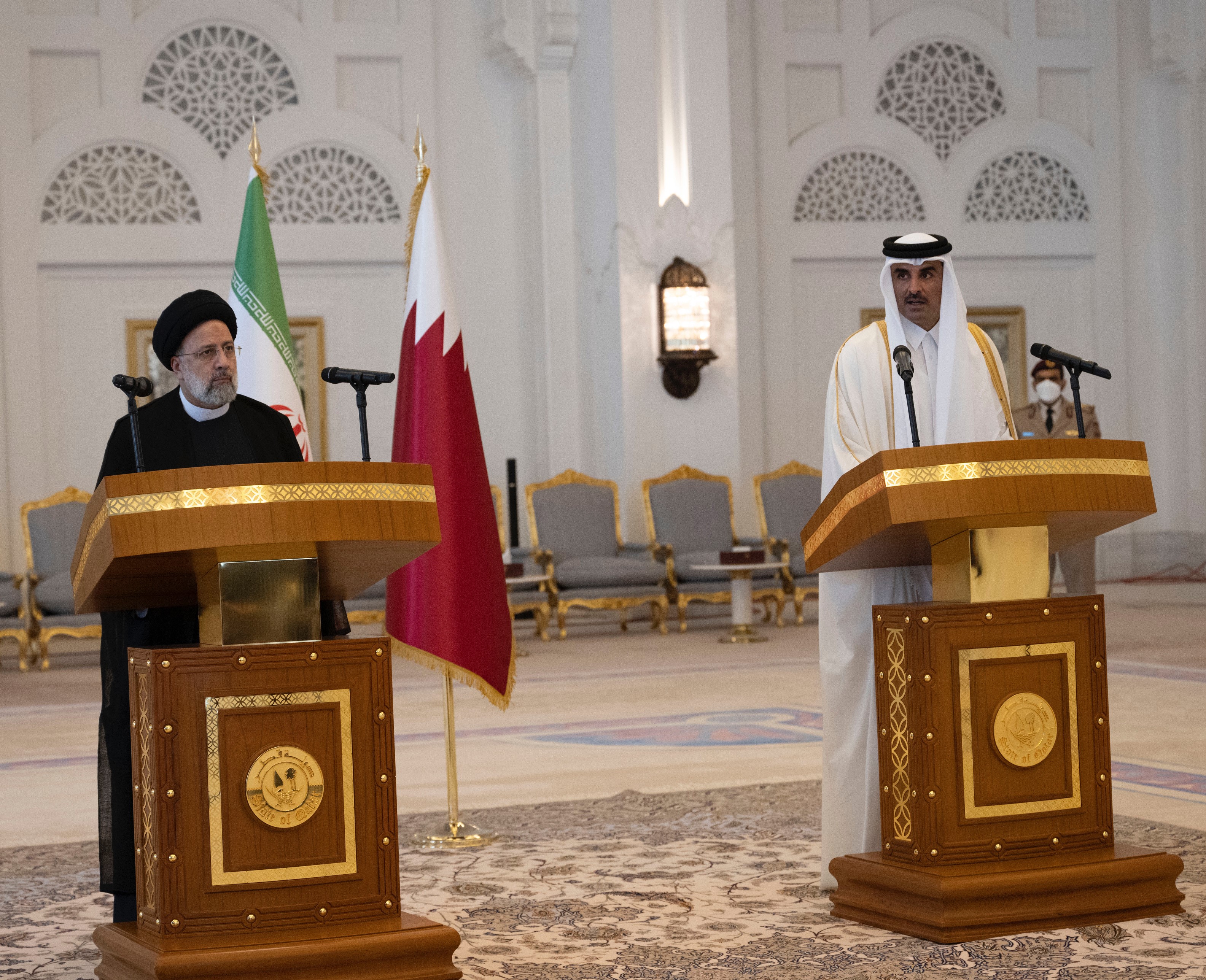 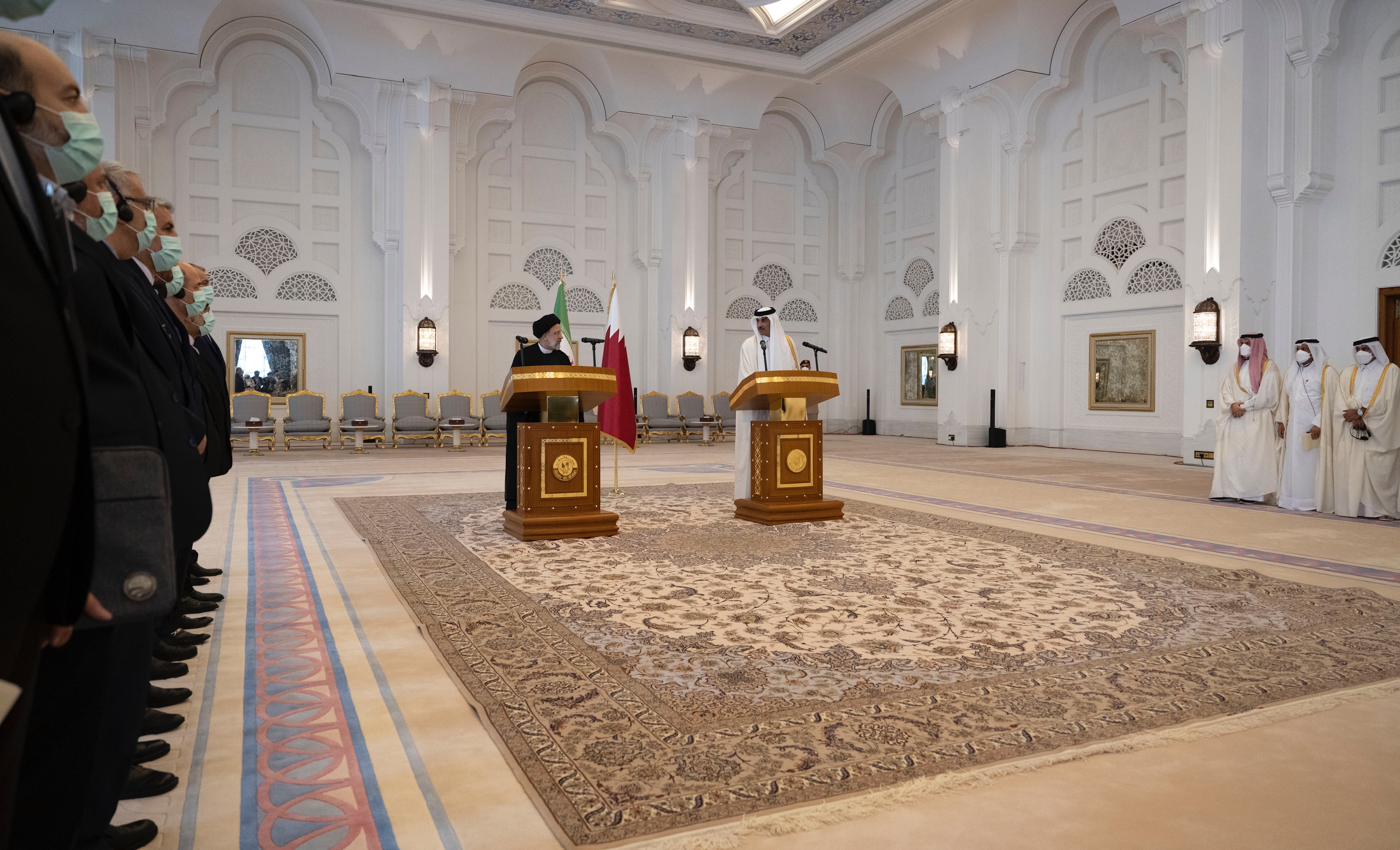 His Highness The Amir Sheikh Tamim bin Hamad Al Thani welcomed HE President of the Islamic Republic of Iran Ebrahim Raisi on his visit to Doha and his participation in the Sixth Summit of the Gas Exporting Countries Forum (GECF), which will be held on Tuesday.

In joint statements following the talk sessions that His Highness held with HE Iranian President at the Amiri Diwan on Monday afternoon, HH The Amir affirmed that the signing of an agreement and several memoranda of understanding between the two countries is a significant matter, looking forward to following up with them to ensure gaining their maximum benefit. HH The Amir commended the important role of the joint economic committee between the two countries, which held its last meeting in Isfahan in November 2020, looking forward to the committee's meeting this year in Doha.

HH The Amir affirmed that during the talk session, His Highness and HE Iranian President discussed enhancing fields of cooperation between the two countries, especially the fields of economy, investment, energy, tourism and other areas that would develop cooperation in the interest of the two countries and their peoples.

His Highness added that several regional and international issues of joint interest were discussed, especially regarding the security and stability of the region. In this regard, His Highness reiterated that dialogue is the best way to resolve all differences and face the various challenges that the region is going through.

HH The Amir explained that he was briefed by HE Iranian President on the outcome of the Vienna negotiations regarding the nuclear agreement between the Islamic Republic of Iran and the West, as well as its importance and impact on the security and stability of the region.

His Highness pointed out that the State of Qatar is attentively following the progress of the negotiations and hopes that a solution and agreement - that satisfies all parties, and guarantees the right of countries to peaceful uses of nuclear energy in accordance with international agreements and resolutions, will be reached in the near future. In this area, HH The Amir reiterated the State of Qatar's readiness to provide any possible assistance in order to reach an agreement that ends the dispute and ensures the security and stability of the region.

His Highness noted that his talks session with HE Iranian President addressed the Palestinian cause as the central and pivotal issue in the region, as emphasis was placed on the need to stop the Israeli attacks against the Palestinian people and to find a solution to the issue in accordance with international outcomes, highlighting the right of the Palestinian people to self-determination and to live in freedom, dignity and stability.

HH The Amir explained that several issues related to the region were also discussed, including Syria, Yemen and Afghanistan, indicating that the two sides expressed their hope to find a peaceful solution to these issues as soon as possible.

For his part, HE Iranian President Ebrahim Raisi expressed his delight at his talk sessions with HH The Amir, and his presence in Qatar to participate in the Sixth Summit of the Gas Exporting Countries Forum.

His Excellency also expressed his thanks to HH The Amir for the warm reception and hospitality, indicating that the abundant energies and capabilities of the two countries can be used to strengthen relations in various fields, especially in the fields of economy, trade, investment, energy, infrastructure, food security and culture.

HE Iranian President also expressed his country's readiness to cooperate with the State of Qatar in all that would ensure hosting the best World Cup tournament.

His Excellency pointed out the advantages that the two countries share, scientifically, geographically and environmentally, noting the human capacity and the possibility of cooperation in the field of economic relations.

In this context, His Excellency affirmed that his country is looking forward for qualitative development and opening new horizons with the State of Qatar in particular, and with the neighboring countries in the Gulf and the region in general, aspiring further cooperation between the countries of the region.