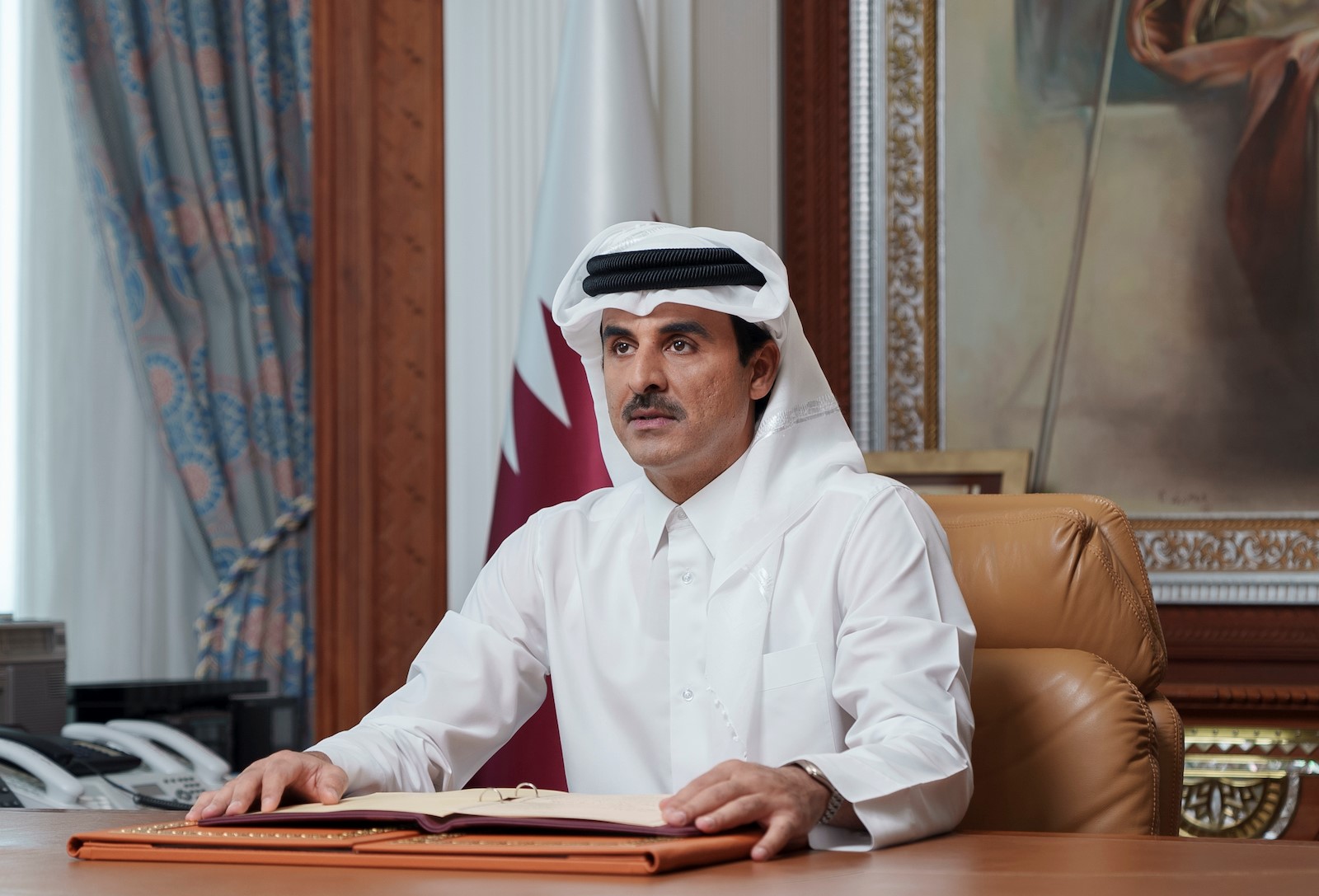 His Highness The Amir Sheikh Tamim bin Hamad Al Thani participated in the G-20 extraordinary meeting on Afghanistan following an invite from HE Prime Minister of the Italian Republic Mario Draghi, whose country chairs the current session. The meeting took place in Rome this afternoon with the participation of a number of Their Excellencies country leaders, Prime Ministers, and heads of delegations.

HH the Amir gave a speech via video conference during the main session of the meeting.

At the outset, I am pleased to extend my thanks to His Excellency Mr. Mario Draghi, Prime Minister of the Italian Republic, for inviting us to participate in this important meeting.

The convening of this meeting reflects the international will to achieve peace, security and stability in Afghanistan. We in the State of Qatar are keen that the brotherly Afghan people enjoy security and stability, which are the preconditions for development and prosperity. Based on this vision and our conviction to resolve disputes by peaceful means, we have made dialogue and dispute settlement a basic pillar of our foreign policy.

In the case of Afghanistan, these efforts have been crowned with the signing of the Doha Agreement on February 29, 2020 between the United States of America and the Taliban movement, that came as the culmination of the direct dialogue between them, which our international partners had asked us to initiate and sponsor it. That was the beginning of the path towards what we hope will become a sustainable peace in Afghanistan.

The agreement has included several articles, foremost of which is the initiation of a dialogue between the Afghan factions themselves, in addition to the withdrawal of the coalition forces from the Afghan territories, provided that the Afghan territories are not used for any activities that threaten other countries. Today, it is the responsibility of the caretaker government in Afghanistan to fulfill the obligations in this regard; the international community also bears great responsibilities towards Afghanistan, at the forefront of which is humanitarian and relief aid, which cannot be delayed.

In this context, I would mention that all the necessary UN mechanisms for providing aid existed since the previous era, when Afghanistan relied to a great extent on that aid that action can be taken to reactivate it. Experience has proven that isolation and siege are conducive to polarize positions and sharp reactions, while dialogue and cooperation can lead to moderation and constructive settlements.

In this context, we stress the importance of continuing construction and development efforts, especially the human development, which is the requirement for preserving the educated middle-class and those who have the expertise and whom the international community has contributed to their development in their country, as we have become afraid of a real brain drain and experts’ flight that Afghanistan may suffer for a long time. This requires the interim government to exert an effort into creating incentives for those people to stay in their homeland.

But this does not contradict securing the freedom of traffic and movement, which is one of our priorities. Qatar was and still is one of the leading countries that seek to receive the Afghans and facilitate their entry and exit to and from Afghanistan. It is worth mentioning that the State of Qatar participated in establishing the largest air bridge in history that helped evacuate thousands of individuals and families of different nationalities from Afghanistan. I also mention in this context that the Qatari technical teams were able to restore Kabul International Airport operations, in less than ten days, and made it suitable for receiving civil aircraft.

Before giving advice and setting conditions, it is essential to bear in mind that the state institutions in Afghanistan are practically in ruins, and that the first task lies in rebuilding and steering them, and that giving the Afghans an opportunity to do this task and offering them a helping hand contributes to the confidence-building process.

As for human and citizens’ rights, they do not conflict with Islamic law, and not only that, but the fundamental purposes of the tolerant Islamic Sharia law that are based on justice, equality and mercy after faith encourage the granting of these rights.

What confirms this is that the State of Qatar takes the Islamic Sharia as a source for its legislation, and women have assumed the position of minister, judge and other public posts. It goes without saying that it is not possible to advance societies in Islamic countries while half of the society is put out of action in terms of work and education.

We reaffirm, once again, our permanent keenness and our firm position to support the Afghan people and their right to live in dignity and achieve reconciliation and peaceful coexistence among all its citizens and components without exclusion or discrimination in order to build a bright future for the present and future generations in this ancient country, and from this standpoint we renew the call for the caretaker government in Afghanistan to exert all efforts to achieve a comprehensive national reconciliation and protection of human rights. We are confident that the Afghan government sees the Afghan people as one, composed of Afghan citizens regardless of their ethnic, regional and other identities.

Finally, I call on the leaders of the G20 and the international community to adopt a practical approach towards the Afghan issue, through which words and good intentions are translated into practical steps that ensure a balance between the rights of the Afghan people to freedom and dignity, and their rights to access to food, medicine and development, which requires a unified international stance and road plan outlining the responsibilities and duties entrusted to the caretaker government in Afghanistan and the international community’s expectations from it without imposing a guardianship, and in return clarifying all of our responsibilities and duties towards this country and its people.

In conclusion, I hope this meeting will achieve the desired goals and fulfill the aspirations of the Afghan people for security and stability.

May God’s peace, mercy and blessings be upon you.