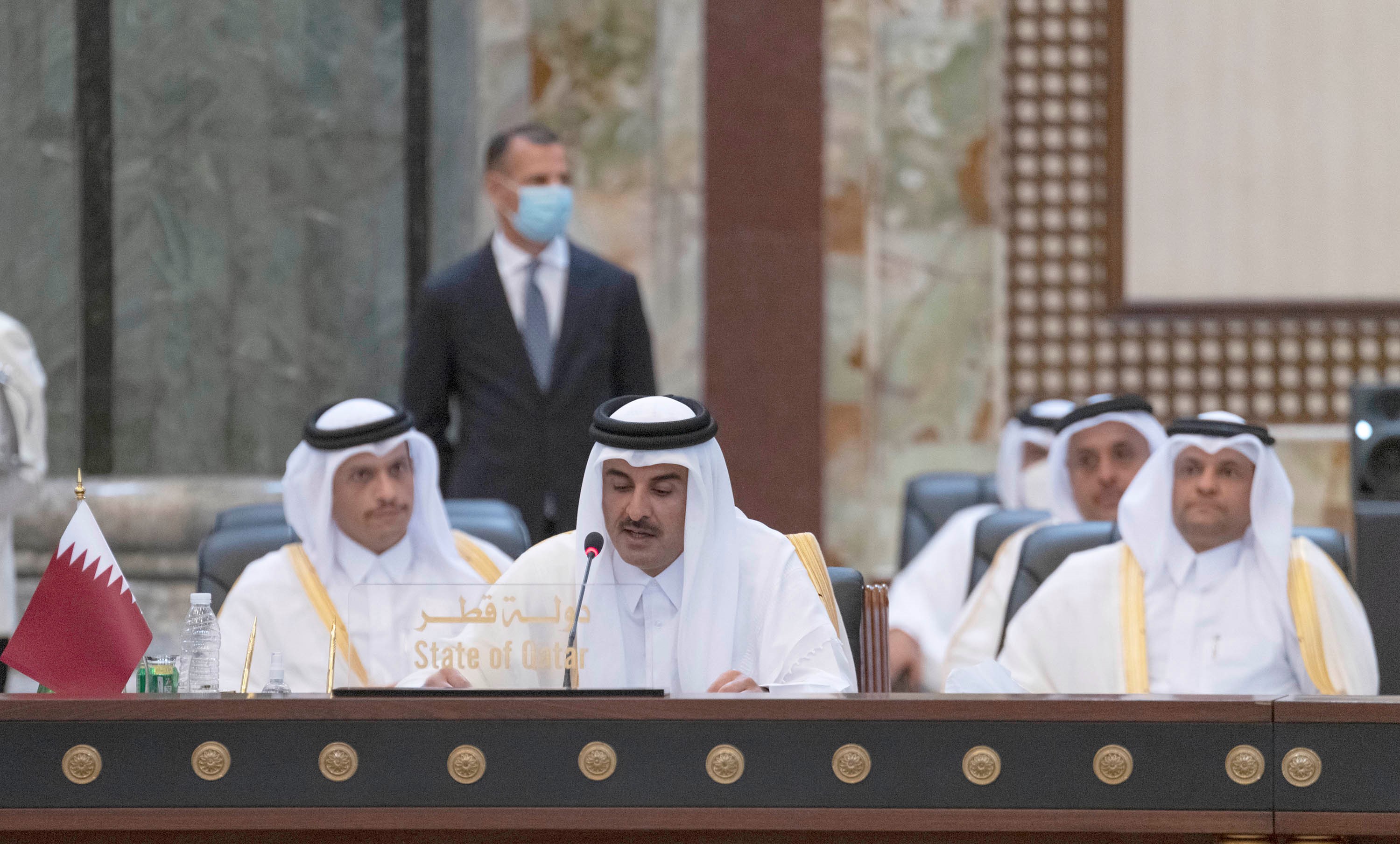 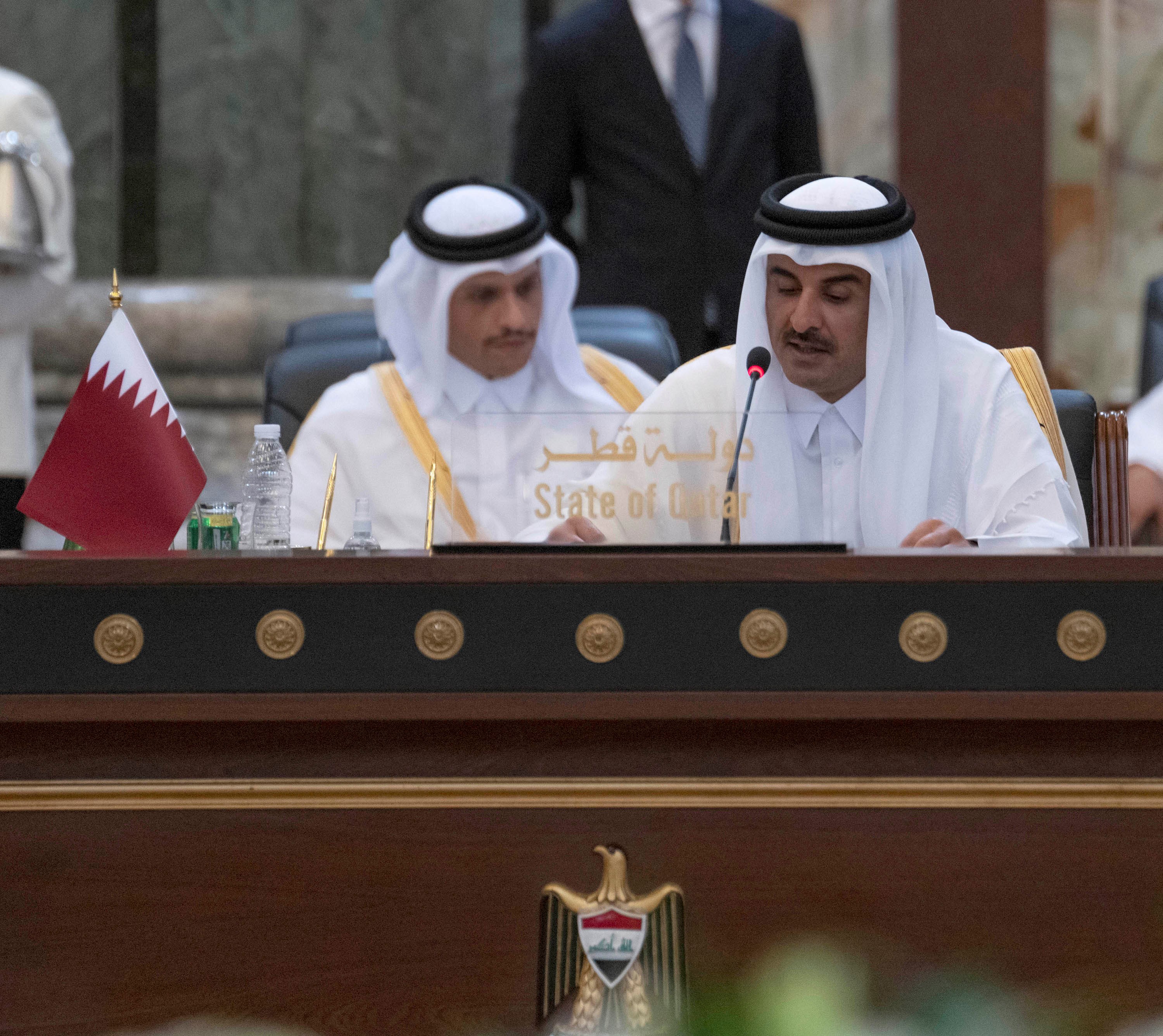 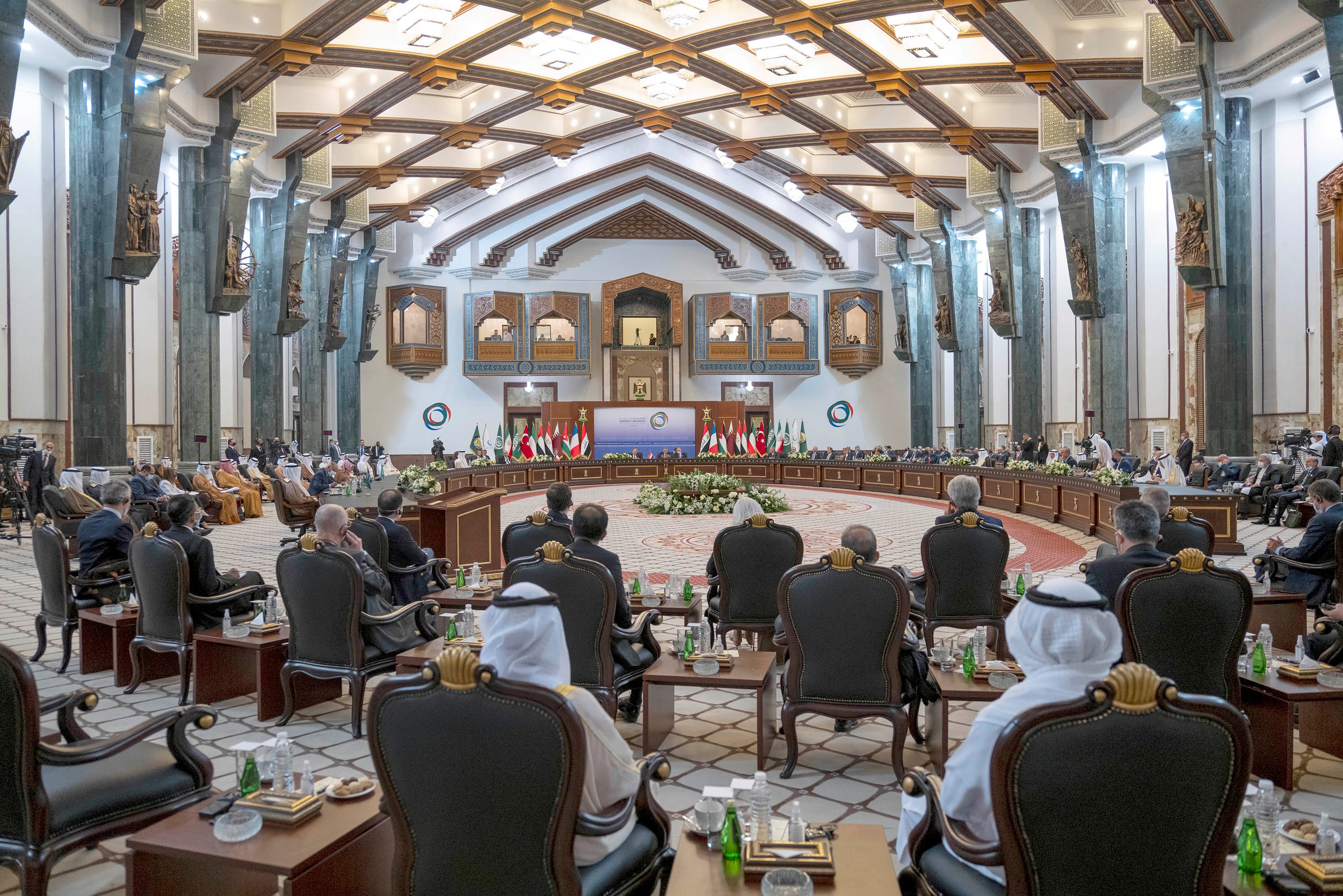 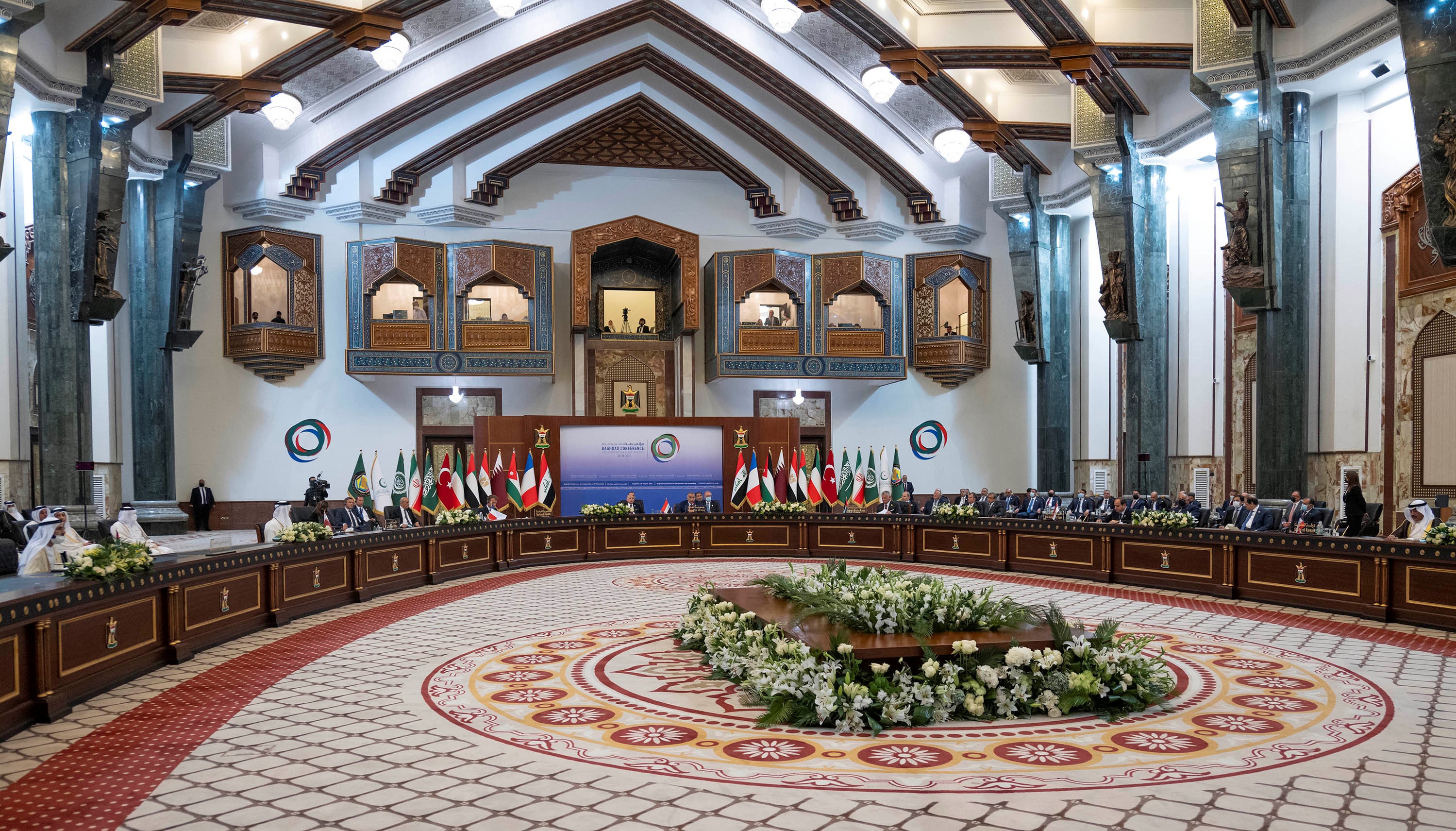 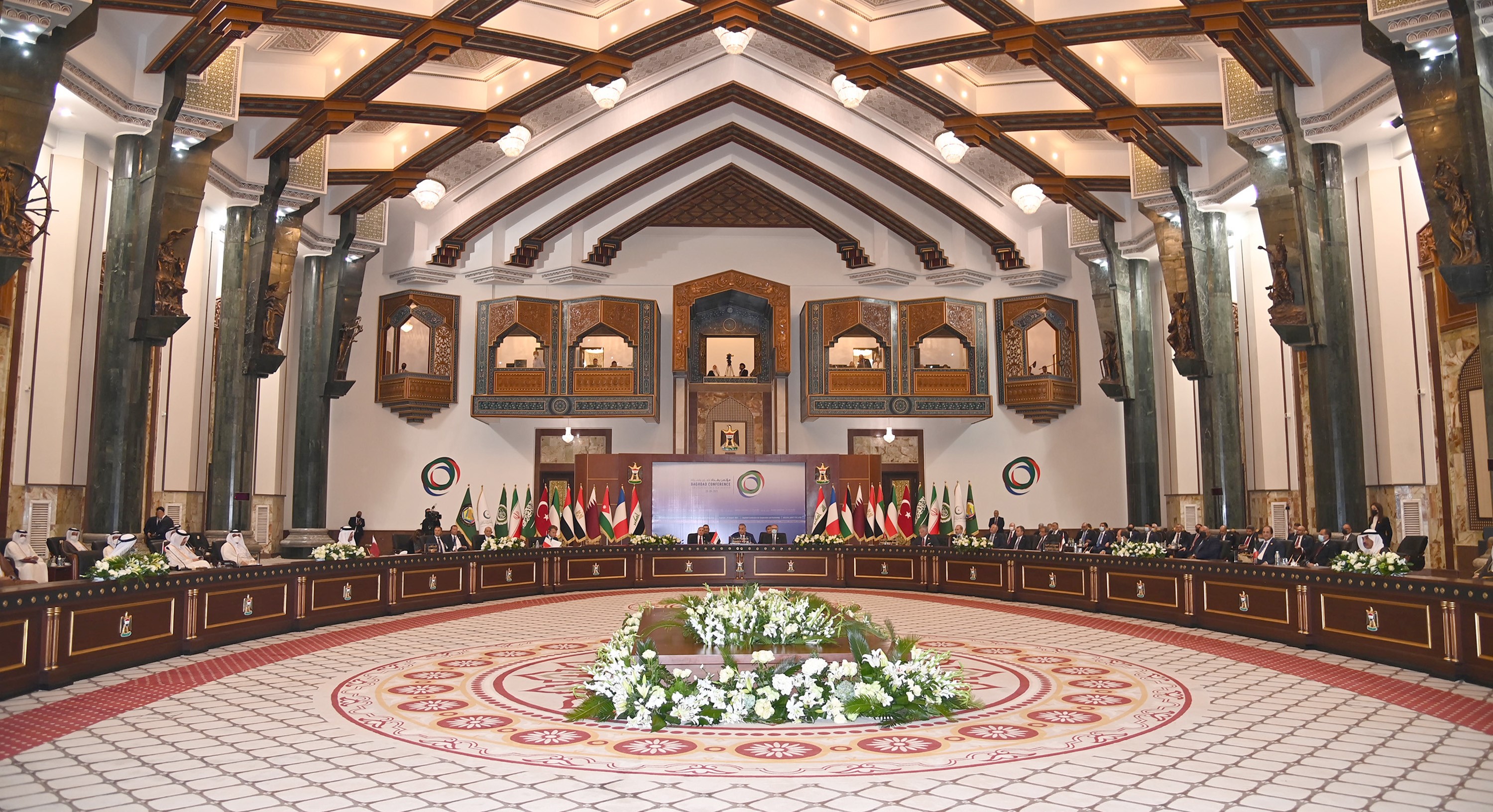 His Highness The Amir Sheikh Tamim bin Hamad Al Thani participated with Their Majesties, Excellencies, and Highnesses leaders of countries and heads of state of brotherly and friendly countries in the opening session of the Baghdad Conference for Cooperation and Partnership, which was held today at the headquarters of the Prime Minister of the Republic of Iraq.

HH The Amir gave a speech:

In the Name of God, the Most Merciful,
the Most Compassionate

At the outset, I am pleased to extend my sincere thanks and appreciation to His Excellency Prime Minister Mustafa al-Kadhimi, Prime Minister of the Republic of Iraq, for convening this important conference.

We value the efforts exerted during the last years to establish security and stability in Iraq, continue building the State’s institutions, maintain the independence of Iraq, and consolidate its national sovereignty.

Our region is passing through challenges and crises that you are aware of, and some of the hotspots of tension thereof constitute a threat not only to the peoples of the region, but also to international peace and security, a matter that necessitates addressing the root causes that led to the emergence of these successive crises.

We in the State of Qatar believe that Iraq is qualified to play an active role in establishing security and peace in the region. From this perspective, we are keen on supporting it to restore its role and the status it deserves on both regional and international levels, we also believe that the security and stability of Iraq is an integral part of the security and stability of other countries in the region. We emphasize that we will continue our support for the brotherly people of Iraq, and to assist them in achieving their aspirations in peace, security and development.

Iraq is a country rich in natural and human resources, but wars, terrorism, and manifold social and political ills which it experienced, impeded it from benefiting from its actual potentials. However, this is definitely a temporary situation, because we are confident that Iraq is rediscovering the sources of its power, foremost of which is the Iraqi citizen who belongs to his nation and people.

We call on the international community to provide the necessary support to this country, to enable it to complete the reconstruction of its civil and military institutions, to achieve the desired security, stability and development for the brotherly Iraqi people in the aftermath of a prolonged suffering.

In conclusion, I reiterate that the State of Qatar will spare no effort to stand by the brotherly Iraq and provide support to the brotherly Iraqi people, and assist them in their efforts to achieve a comprehensive development in their country, hoping that this conference would contribute to creating a supportive regional environment to achieve these aspired goals and noble ends.

May God’s peace, mercy and blessings be upon you all.