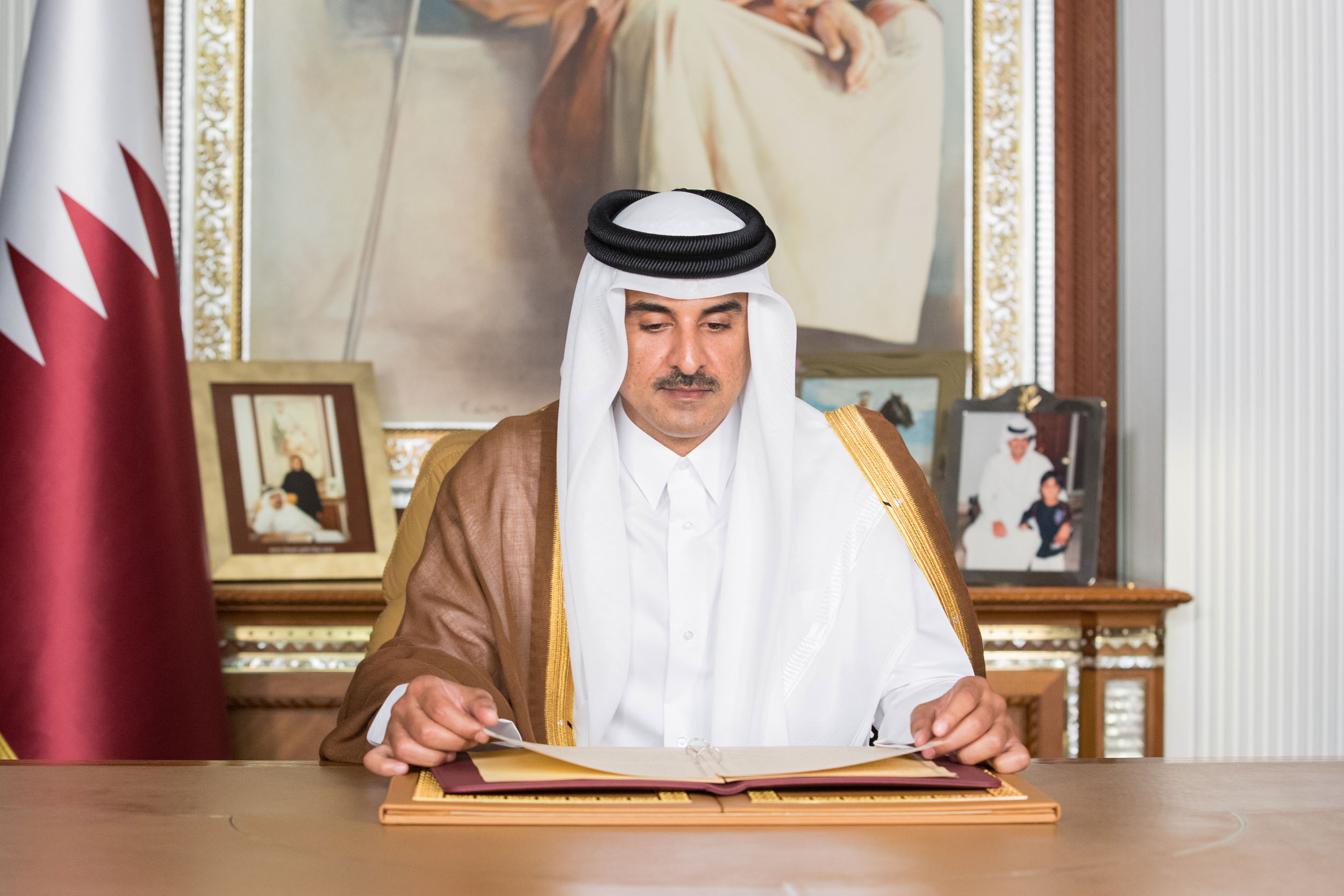 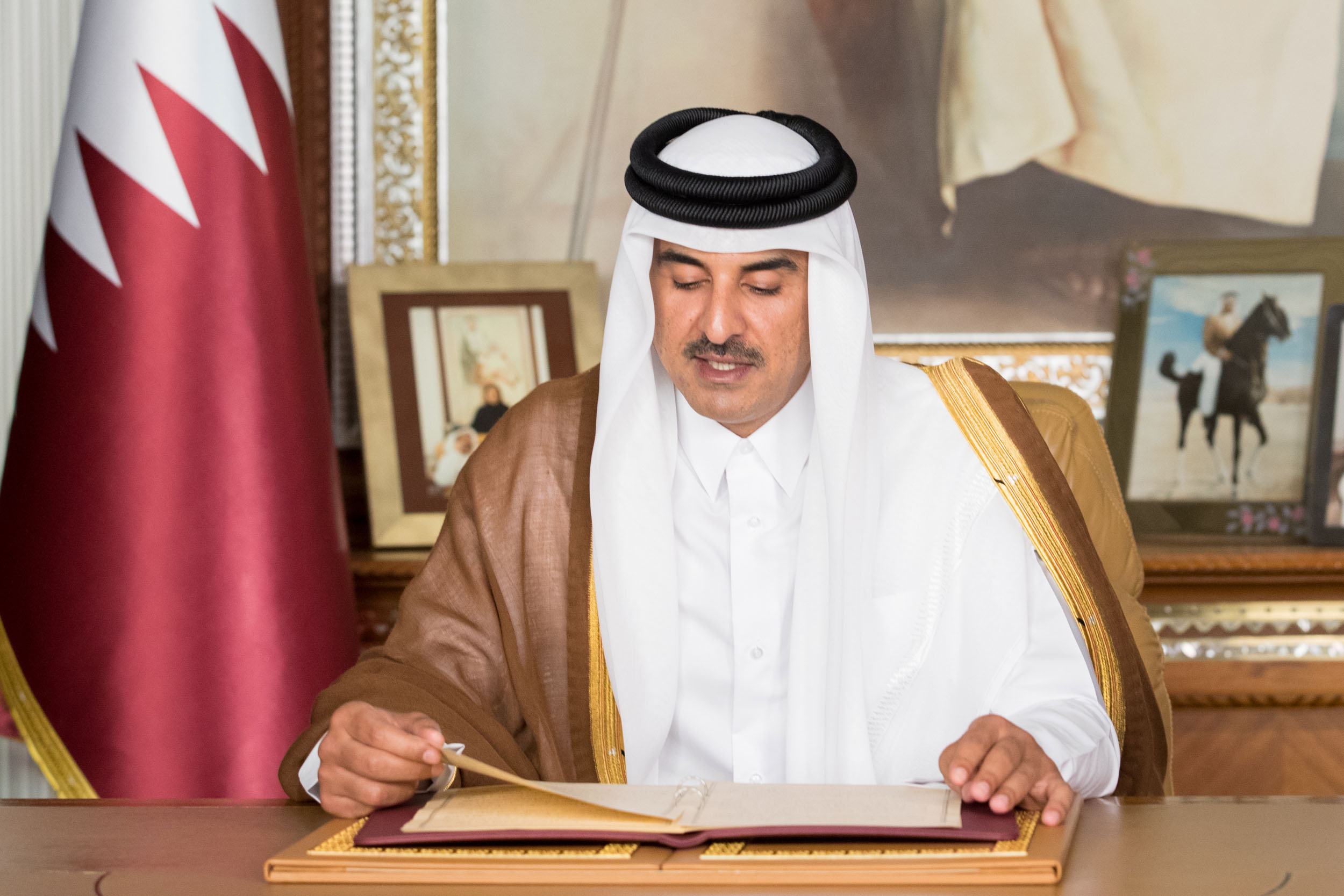 His Highness The Amir Sheikh Tamim bin Hamad Al Thani participated in the opening session of the General Debate of the 75th session of the United Nations General Assembly, that was held via video conference at the UN headquarters in New York, with the participation of a number of Their Majesties, Highnesses, Excellencies, heads of state and government and delegations.

At the outset, I congratulate His Excellency Mr. Volkan Bozkir on assuming the presidency of the Seventy-Fifth Session of the General Assembly, wishing him every success and favorable outcome. I also thank His Excellency Mr. Tijjani Muhammad-Bande, President of the previous session, for the appreciated efforts he exerted during his tenure, and I avail myself of this opportunity to commend the role of His Excellency the Secretary-General. Mr. António Guterres in promoting the role of the United Nations and achieving its goals.

The convening of this session comes as we celebrate the seventy-fifth anniversary of the founding of the United Nations, and it is opportune on this occasion to remember that it is an institutional expression of our awareness that we belong to one humanity. There are many historical experiences that substantiate this fact and prove the risk of underestimating it.

The outbreak of the Covid-19 pandemic has reminded us that we live on the same planet, and that multilateral cooperation is the only way to address the challenges of epidemics, climate and the environment in general, and it’s also preferable to remember this when dealing with the issues of poverty, war and peace, and realizing our common goals for security and stability.

Based on this understanding, and after the State of Qatar hastened to take all preventative actions and measures to protect the citizens and the residents on its territory, it has not seen any contradiction between its duty in this respect and providing aid to more than 60 countries and five international organizations, and participating actively in the international efforts to mobilize resources and potentials to address this epidemic and its repercussions, as well as supporting  research centers in several countries to limit the serious negative ramifications of this pandemic and to expedite the development of a vaccine for this virus.

After more than three years since the start of the unjust and illegal blockade on the State of Qatar, we have continued the march of progress and development in various fields.

Despite the blockade, Qatar has strengthened its effective participation in the multilateral international action to find solutions to other crises.

And during the unjust and unlawful blockade it is going through it also has securely established its policy founded on respecting the rules and principles of international law and the United Nations Charter, especially, the principle of respecting the sovereignty of states and rejecting intervention in their internal affairs.

And based on our moral and legal responsibilities towards our peoples, we have affirmed, and we will continue to reaffirm, that unconditional dialogue based on common interests and respect for the sovereignty of states is the way to solve this crisis which had started with an illegal blockade, and whose solution starts with lifting this blockade.

On this occasion, I reiterate my deep appreciation for the sincere efforts of His Highness Sheikh Sabah Al-Ahmad Al-Jaber Al-Sabah, Amir of the sisterly State of Kuwait, and to commend highly the endeavors of brotherly and friendly countries to bring this crisis to an end.

A just and desired peace can only be achieved through Israel’s full commitment to the terms of reference and decisions of the international legitimacy accepted by the Arabs and upon which the Arab Peace Initiative is based, while Israel tries to circumvent it and acts as if the Palestinian cause does not exist. Any arrangements that are not based on these terms of reference will not achieve peace, even if they are called peace. It may have intents other than the just solution to the Palestinian cause, and other than achieving a comprehensive, just and lasting peace.

The lingering of the Palestinian cause without a just solution, and Israel's continued settlements and creation of pretexts on the ground without being deterred pose the biggest question mark on the credibility of the international community and its institutions.

We call on the international community –especially the Security Council –to assume its legal responsibilities to obligate Israel to lift the siege on Gaza Strip, put the peace process back on track through credible negotiations based on the international resolutions and not on force, to address all final status issues, ending occupation within specified timeframe and establishing an independent Palestinian state within 1967- borders with East Jerusalem as its capital, and to end the Israeli occupation of all Arab territories.

And in the context of our endeavor to prepare the appropriate conditions to reach peace and to respond to the economic and humanitarian difficulties facing our brothers in Palestine, we, in coordination with our international partners, have continued providing humanitarian and developmental aid to cater for urgent and long-term needs in the besieged Gaza Strip, in addition to increasing our contributions to UNRWA.

Based on our firm belief in resolving disputes by peaceful means, and with the grace of God and thanks to Him, the State of Qatar's mediation efforts have culminated in signing a peace agreement between the United States and the Taliban movement, in Doha, on February 29, 2020, and was able to make an exchange of prisoners between the government of Afghanistan and the Taliban movement a success during the discussions held in Doha last month.

Our efforts, along with our international partners, to convene the Intra-Afghan peace negotiations which began on the 12th of this month, in Doha, have culminated in success, and its ensuing success now depends on the Afghan brothers themselves. We will exert our efforts in cooperation with the international community to facilitate the dialogue, in the hope that peace and stability will soon prevail across Afghanistan, if everyone decides to completely renounce violence, and accept diversity, difference and equal citizenship in this country.

After more than nine years since the Syrian crisis which witnessed unprecedented humanitarian tragedies, whose serious negative impacts are year after year, it is still impossible to reach an end to this crisis due to the intransigence of the Syrian regime and the inaction of the international community, especially, the Security Council, in assuming its duty to maintain international peace and security and protect civilians.

The Syrian regime still obstructs even the process of drafting a new constitution, proposed by Russia, which, unfortunately, is all that was left of the international efforts to realize some sort of a peaceful solution. The regime deals with this effort with the same strategy of keeping up pace with the international community that it followed by ostensibly participating in negotiations to gain time without intending to make any change.

On this occasion, I reiterate the firm stance of the State of Qatar that the only way to end the Syrian crisis is a political solution based on the Geneva Communique (1), and the implementation of Security Council Resolution 2254. The State of Qatar also affirms that it will continue, with the international community, to support efforts to realize justice and holding accountable the perpetrators of atrocities, war crimes and crimes against humanity committed in Syria.

In the humanitarian field, we will continue to provide all forms of support and assistance to the brotherly Syrian people in areas of displacement and refuge till the end of this crisis.

As for the raging war in sisterly Yemen which is still demolishing the urban buildings in Yemen, wiping out the necessities of life, and threatening security in the region, we affirm that the only way to resolve this crisis is through negotiation between the Yemenis in accordance with the outcomes of the National Dialogue, the Gulf initiative, and the relevant Security Council resolutions, particularly, resolution 2216. We affirm our firm position on the unity of Yemen and its territorial integrity.

As for the brotherly Sudan, we value the signing of a peace agreement in Juba, between the Transitional Government in Sudan and a host of armed movements, and we express our appreciation to the state of South Sudan for sponsoring the signing of this agreement, and we look forward to the rest of the factions to join the peace process. We stress the firm stance of the State of Qatar beside the brotherly Sudanese people to successfully pass through this transitional period and achieve their aspirations for stability and development.

We reiterate the call on the relevant countries to facilitate the efforts of the brothers in Sudan to remove the name of Sudan from the list of states sponsoring terrorism, as the difficulties and hardships they are facing have taken their toll on them. In this context, Qatar stood with the brothers by providing them with support to counter the flooding that severely inflicted serious damage to facilities and the people as well, and we call upon the international community to provide them with all kinds of necessary support to counter the natural disasters.

Regarding the Libyan issue, we reiterate welcoming the ceasefire agreement and activating the political process in accordance with the Skhirat Agreement and all its outcomes, to achieve a comprehensive political settlement that will maintain Libyan sovereignty, territorial integrity and independence, and stem the bloodshed of its people and preserve its wealth. It is beneficial for all to understand the impossibility of imposing a military regime by force in Libya.

We were pained by what Lebanon went through in the aftermath of the explosion at the port of Beirut. We stood beside our Lebanese brothers without conditions. It is not our habit to impose political conditions to show solidarity during disasters. But in the end, it will be incumbent on the Lebanese themselves, and not by a dictation, to find agreed upon ways for reform to fulfill the aspirations of an entire generation for a state based on citizenship rather than any other affiliations. This, incidentally, is an aspiration shared by the younger generation across the entire region.

Terrorism remains one of the most prominent challenges facing the world as it poses a real threat to international peace and security, and impedes achieving sustainable development for peoples. We in the State of Qatar spare no effort to actively participate in international and regional efforts to address this phenomenon and tackle its roots, especially by supporting education for millions of children, youth and women and creating job opportunities for young men.

In this context, Qatar is strengthening the strategic partnership with the relevant United Nations agencies. I am referring here to the opening of a program office of the United Nations Counter-Terrorism Office in Doha next May to implement behavioral insights on combating terrorism and violent extremism.

We are pleased to host in Doha next March the Fifth United Nations Conference on the Least Developed Countries. We are confident that this conference will support their march towards achieving their development for the next decade in line with the 2030 Agenda for Sustainable Development.

In conclusion, we affirm the State of Qatar’s commitment to the declaration adopted by the General Assembly on September 21st with the participation of Heads of State and Government, and in which the State of Qatar assumed - in partnership with the Kingdom of Sweden - a role in facilitating the international negotiations for its adoption. We will continue to work with the United Nations to achieve its goals and address the common challenges to maintain the interest of our peoples and the good for humanity.

Thank you, and may God’s peace, mercy and blessings be upon you.