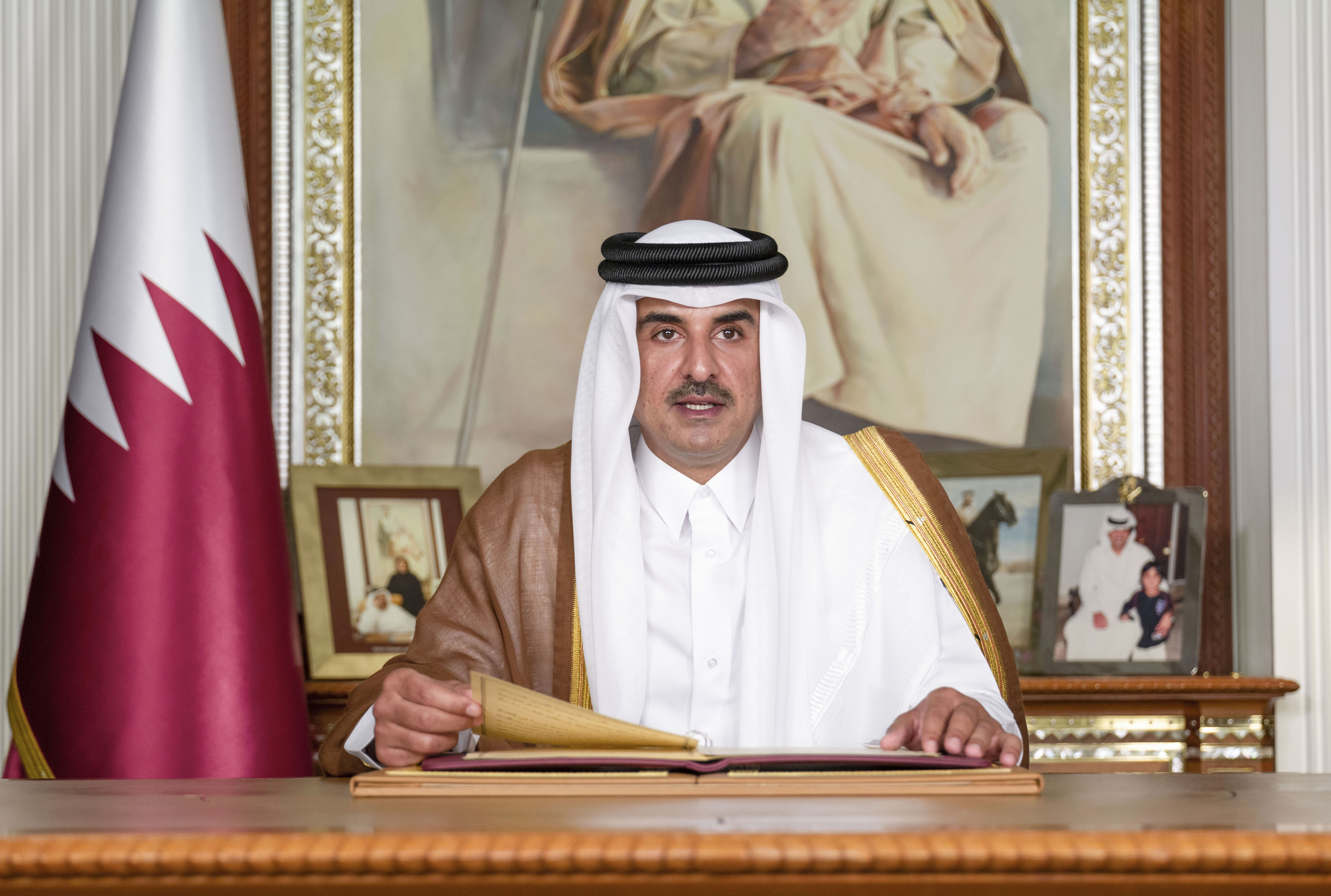 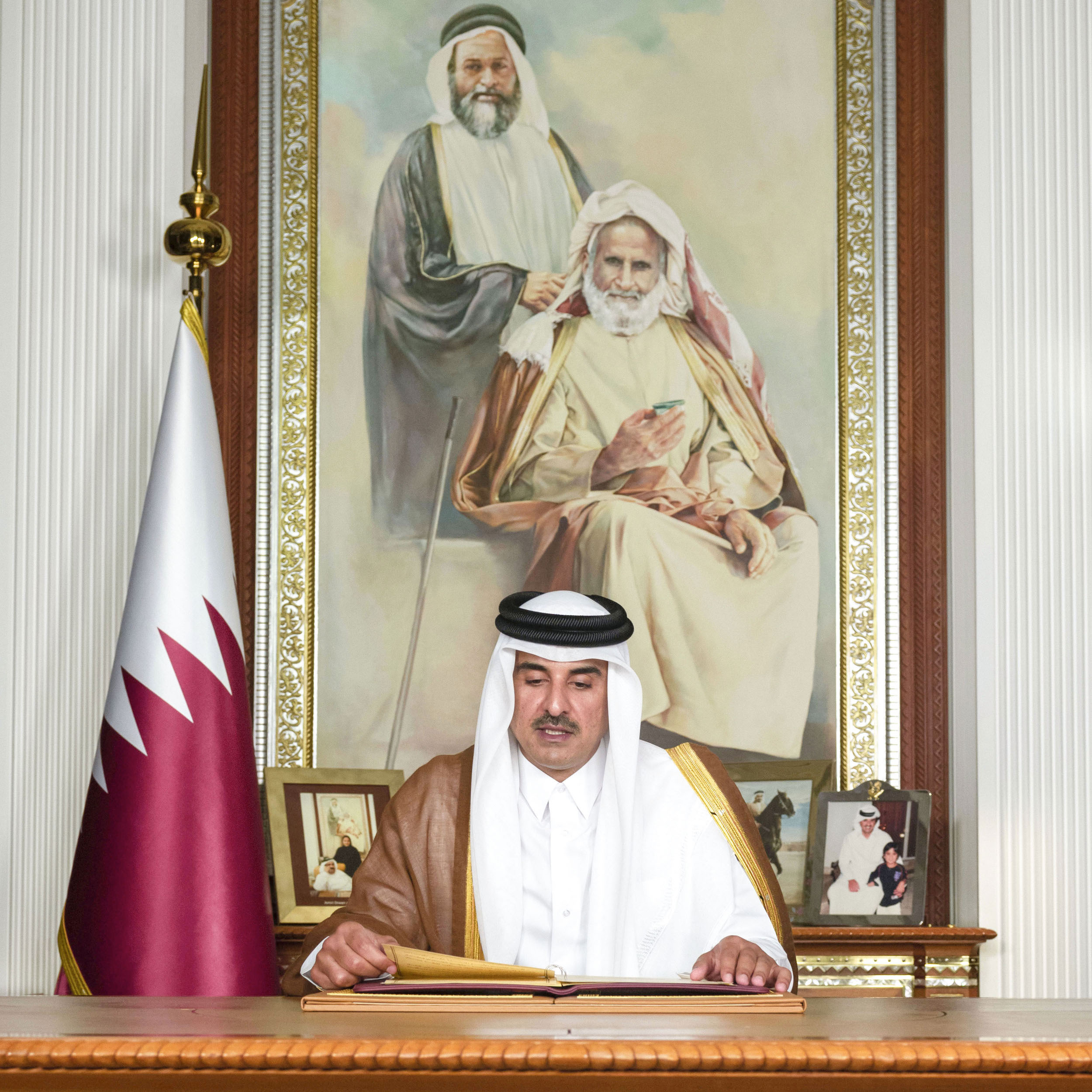 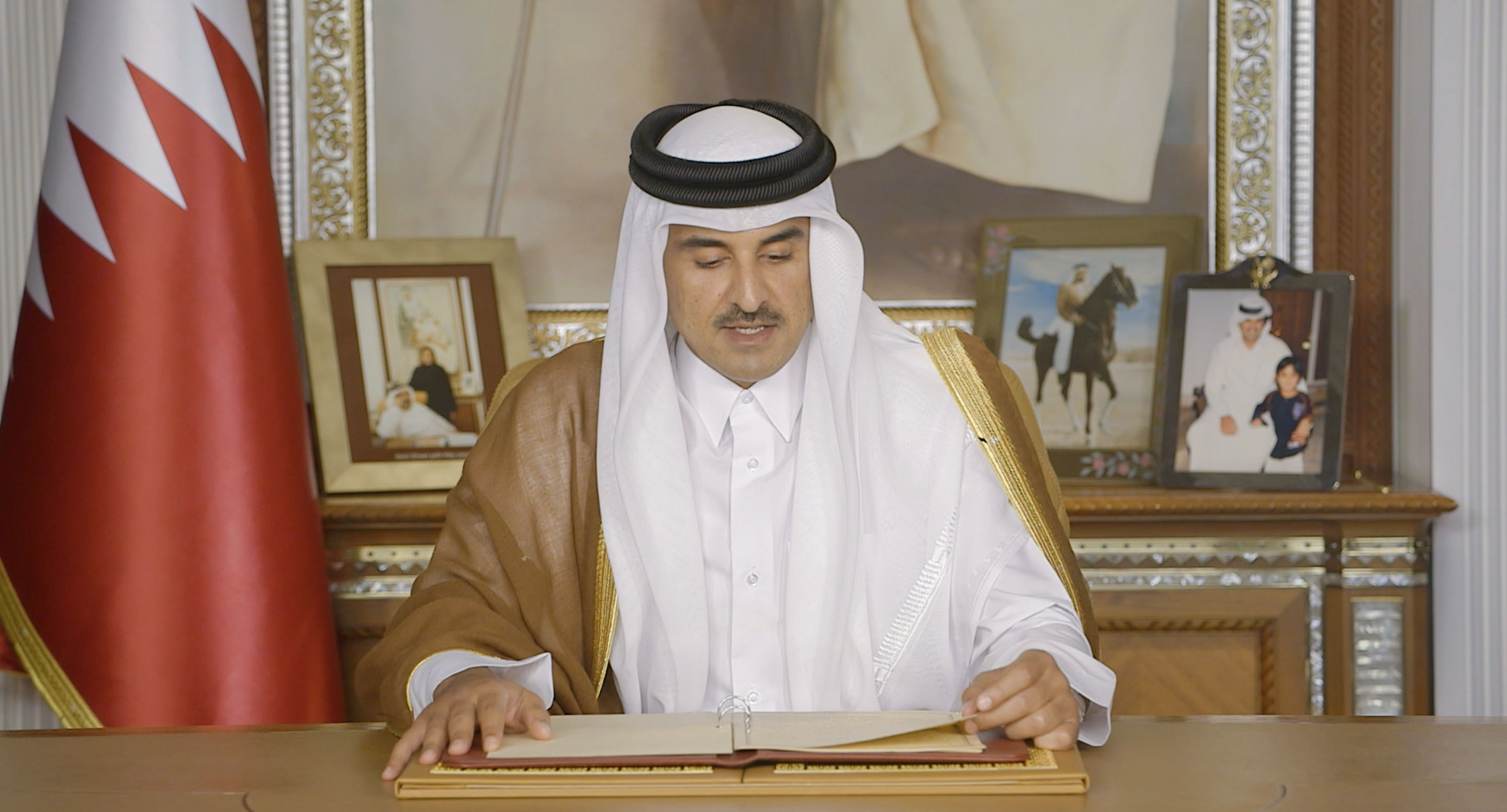 His Highness The Amir Sheikh Tamim bin Hamad Al Thani participated in the High-Level Meeting of the General Assembly to Commemorate the 75th Anniversary of the United Nations that was held via video conference at the UN headquarters in New York, with the participation of a number of Their Majesties, Highnesses and Excellencies heads of states, governments and delegations.

At the outset, I would like to thank His Excellency the President of the General Assembly for convening this important meeting to commemorate the seventy-fifth anniversary of the United Nations. I also express our deep appreciation for the efforts exerted during the last months to make this meeting come out with the declaration of world leaders, which is a historic document reflecting the consensus of the international community to crystallize a unified stance vis-à-vis the common challenges and to achieve the lofty goals of the United Nations in the field of peace, security, development and human rights as the basic pillars on which our organization was founded.

The founding of the United Nations has represented a great hope for mankind in the aftermath of the disasters of the Second World War, by drawing conclusions from it and from the absence of a global framework of relations among nations that don’t accept wars as a means of settling disputes,  and  agreed upon and binding principles that allow a collective confrontation against genocides.

The United Nations was incepted on a hypothesis of an existing humanity that binds us together, and a common perception of the rights of the human being and his dignity, thus constituting a turning point in international relations.
The United Nations has made a great stride in achieving the goals agreed upon by the international community, and has been able over the past decades to make many contributions for the advancement of humanity, saving millions of people and changing their lives for the better, through its various institutions and organizations, which are no longer conceivable to imagine our  contemporary world without them.But it is still falling short of finding the necessary mechanisms to impose its principles on its members, while the right of might still outweighs the might of right in different regions of the world and in different areas of our life.

Today, as we are on the threshold of the third decade of the current century, and despite these appreciated efforts, the world is still facing emerging and unprecedented challenges in various aspects, foremost of which are the exacerbation of regional and international  flash points of tension, disarmament problematic issues, environmental issues, sustainable development, terrorism and other global challenges.
Among the most serious challenges that have encountered the international community since the founding of the United Nations is the issue of collectively addressing the threat of epidemics.
The confrontation of the Covid-19 pandemic and its dangerous negative repercussions on lives, public health and countries' economies is supposed to remind us that the people on earth are tantamount to one family facing a common destiny, and that cooperation and joint action are inevitable to address global challenges.

Our meeting today constitutes an important opportunity to renew the commitment of the international community to the letter and spirit of the United Nations Charter, and that it will continue to be a beacon for our international action, and a stepping stone for us to strengthen international cooperation to achieve its lofty goals.

This entails a serious evaluation and review of the international multilateral action and necessitates hard work to overcome the obstacles that hinder our joint efforts, to achieve a comprehensive reform, especially the issue of representation of the world's people in the UN Security Council, as well as the mechanisms of implementing its  resolutions, avoidance of double standards in implementation, and review of internal regulations that correlate common security issues with the positions of each of the five major states.

In this context, we reaffirm the State of Qatar's steadfast position in supporting and embodying the principles and objectives of the United Nations charter. We stress the need to implement the political declaration adopted today by promoting multilateralism and preventive diplomacy, respecting the sovereignty of states and dealing with them on an equal footing,  addressing resolutely the use of force in international relations, finding solutions to protracted crises and conflicts based on international law and decisions of the international legitimacy,  respecting the rule of law on the national and international levels,  activating the role of women and youth in all fields, using the scientific progress in proper and legitimate manner, implementing international declarations and accords and achieving the goals of the United Nations Sustainable Development Agenda 2030.

In conclusion, I reiterate the State of Qatar’s commitment to work with the United Nations, pursue its support for it and promote partnership with its agencies to enable it to face the common global challenges and achieve its desired goals.

Thank you, and may God's peace, mercy and blessings be upon you.