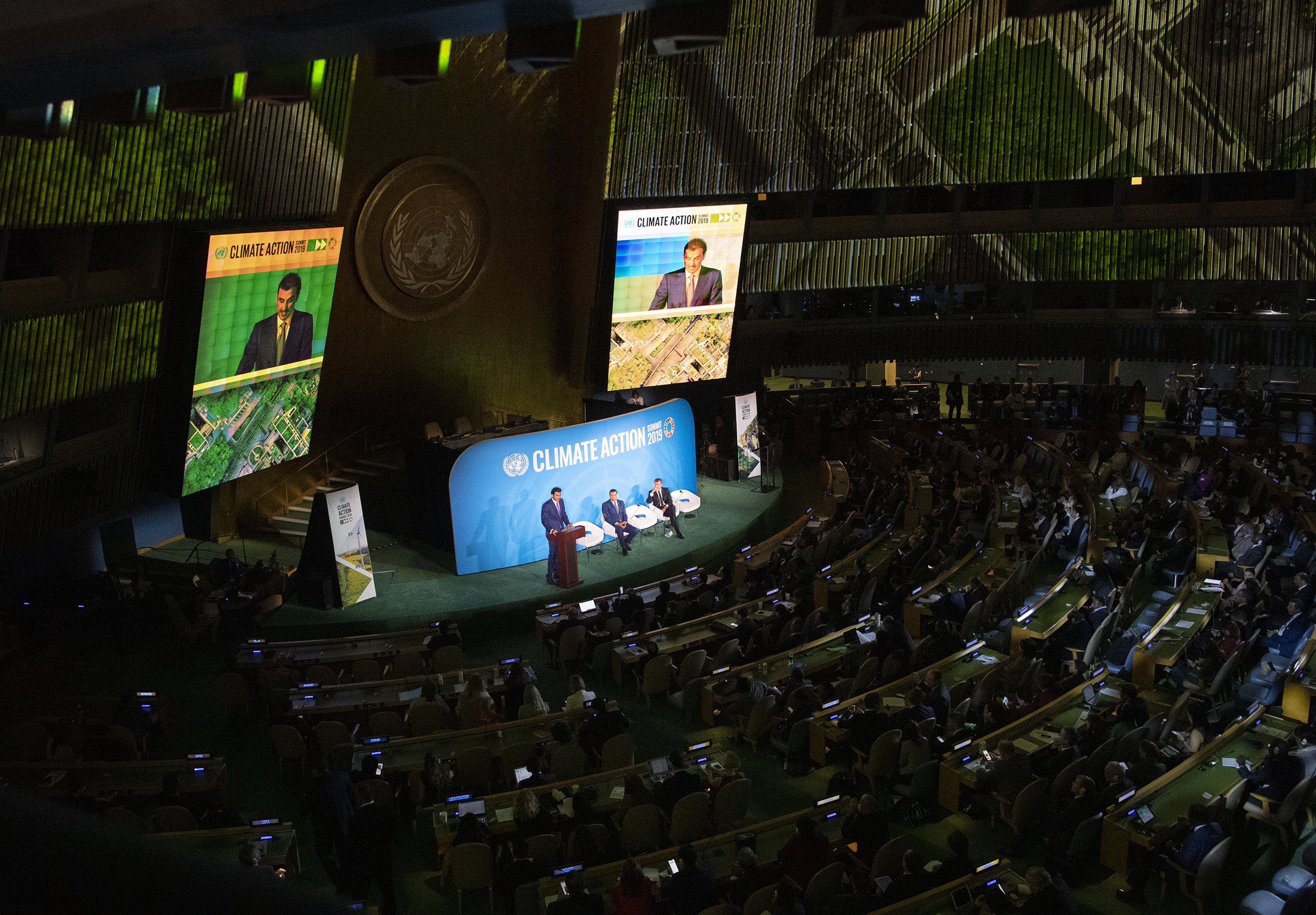 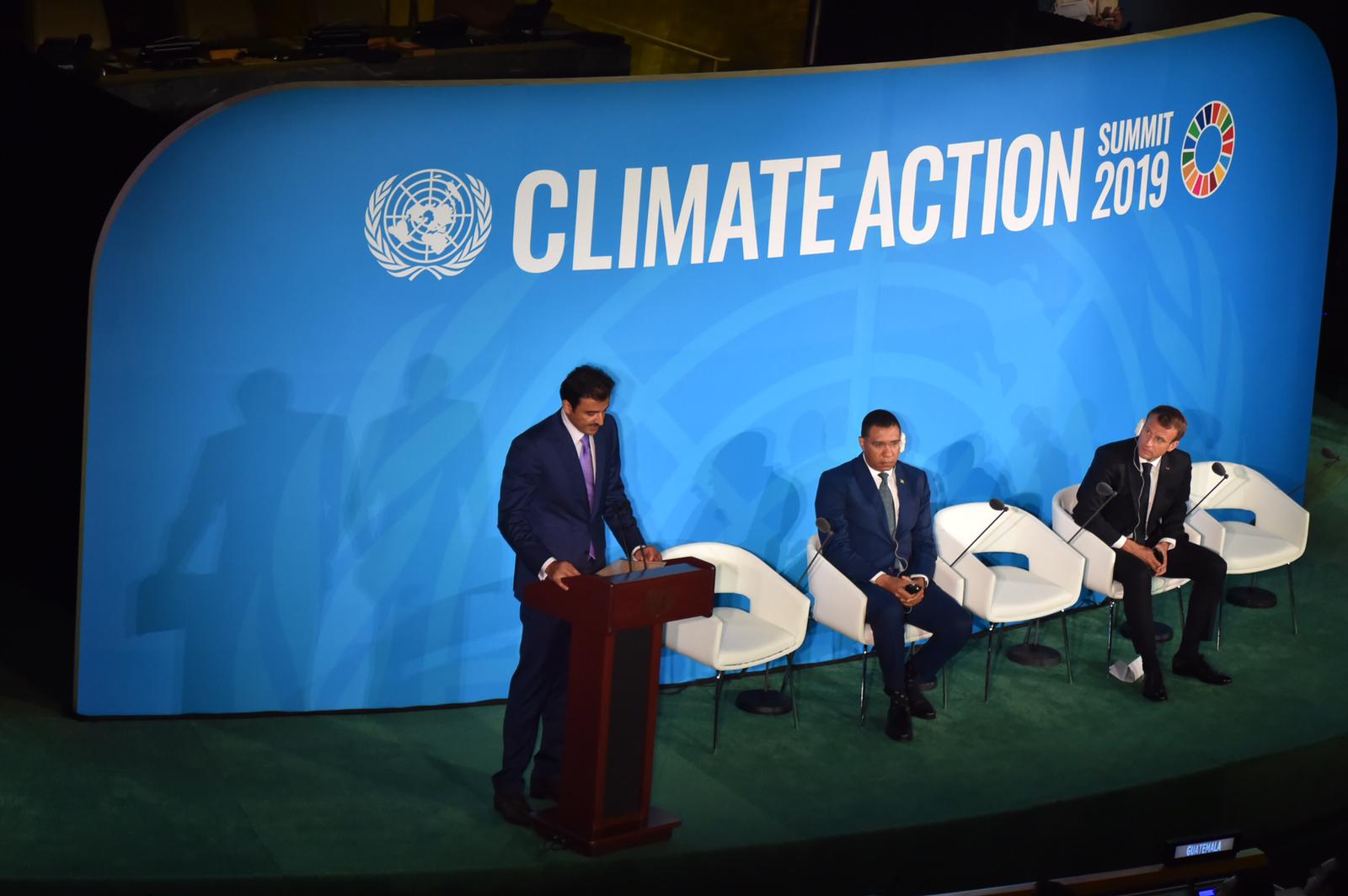 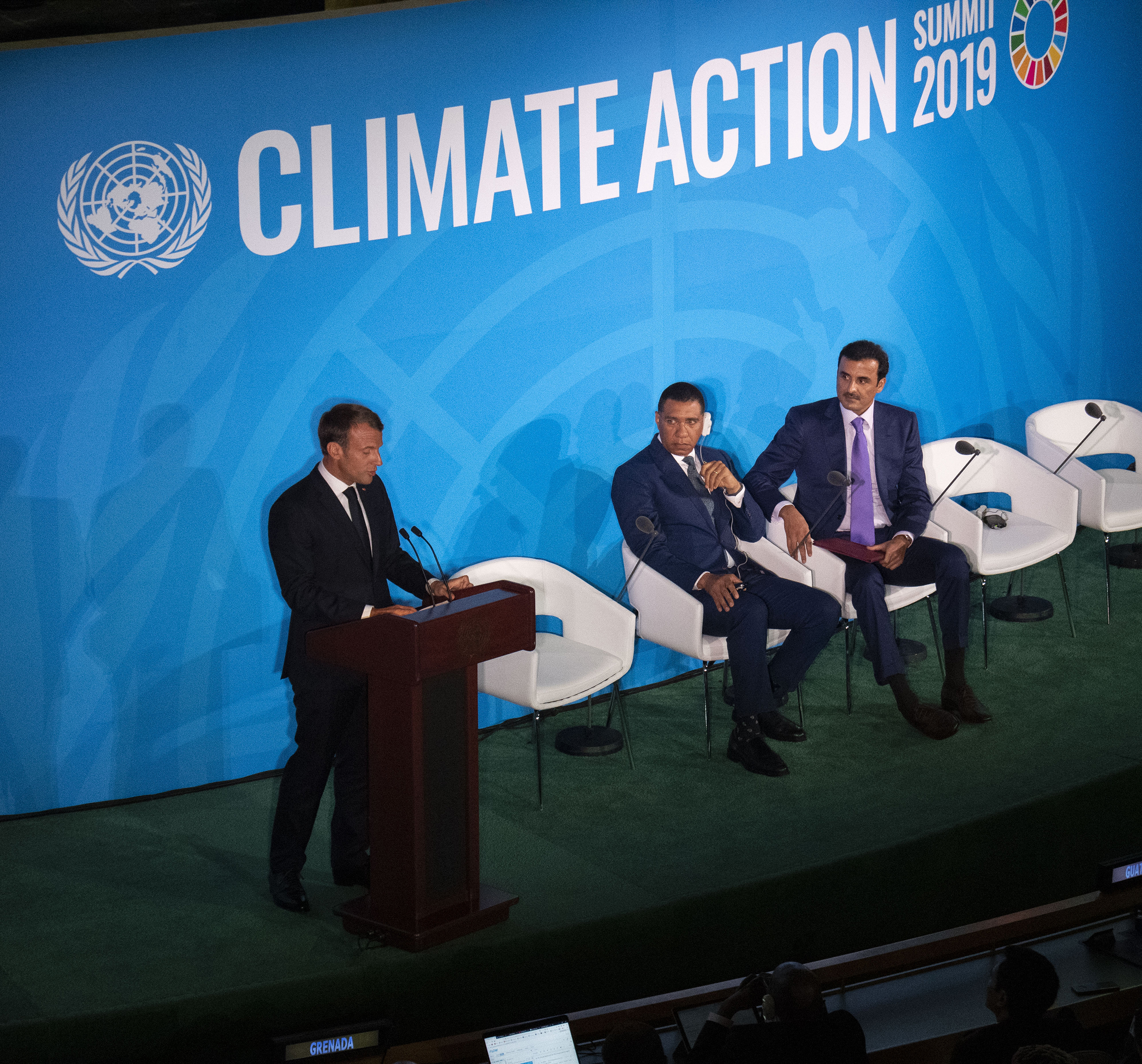 His Highness The Amir of Qatar Sheikh Tamim bin Hamad Al Thani took part in the UN Climate Action Summit 2019, which was held by HE UN Secretary-General Antonio Guterres at the UN headquarters in New York on Monday, in conjunction with convening the 74th session of the UN General Assembly, in the presence of a number of heads and leaders of the world and representatives of civil society organizations and institutions concerned with the environment internationally.

HH The Amit participated in the Climate Finance and Carbon Pricing Coalition session alongside HE President of the French Republic Emmanuel Macron and HE Prime Minister of Jamaica Andrew Holness.

HH The Amir delivered a speech, which reads as follows:

In the Name of God the Most Merciful, the Most Compassionate

At the outset, it gives me pleasure to thank His Excellency the United Nations Secretary-General Antonio Guterres, for his appreciated efforts in preparing and organizing this important summit.

The phenomenon of climate change is undoubtedly one of the serious challenges of our time. It is a problem that is continuously exacerbating and causing many problems which intertwine in their economic, environmental and social dimensions and have very serious negative repercussions on all forms of life including human life and on both developed and developing countries alike, especially on the tracks of the sustainable development which all peoples aspire to.

This serious phenomenon makes it incumbent upon the international community to cooperate and double efforts to confront it and reduce its repercussions. It is sufficient for us to look at the devastation caused by Hurricane Durian in the Bahamas and the suffering of its population to realize the dire need for such cooperation.

All states must fulfill their responsibilities and honor their commitments which international agreements have established to this effect.

The State of Qatar has assumed its responsibility as an active partner in the international community to confront the climate change phenomenon. In 2012, it hosted the Eighteenth Session of the Conference of States Parties to the United Nations Framework Convention on Climate Change and the Doha Carbon and Energy Forum, in which international experts participated to develop public policy recommendations for this sector and for governments on climate change and alternative energy, and carbon capture and storage. The State of Qatar has also spared no effort to ensure the success of negotiations of the Paris Climate Agreement in 2015.

At the national level, the State of Qatar - in the light of its National Vision 2030 - has taken many measures to develop technologies taking into consideration climate change and adoption of clean energy, through the optimal use of water in order to reduce the loss of desalinated water, encouragement of recycling and reuse of water, improving air quality, promoting the efficiency of using gas and energy, waste recycling and increasing green spaces.

In the same context, and to achieve our long-term environmental goals, the State of Qatar has prepared a set of fixed goals, the most important of which are those related to renewable energy to generating 200 megawatts from solar energy within the next two years which will increase to 500 megawatts afterwards, and we are seeking to regulate carbon pricing as a means of reducing emissions and driving investments towards cleaner options.

We, as hosting country of FIFA World Cup 2022, are committed to organizing an environment-friendly tournament and the first "carbon neutral" tournament through the use of solar-powered stadiums and the use of cooling and lighting technology that is water and energy-saving.

I would also like to point out that Qatar Sovereign Wealth Fund assumes an active role in combating climate change, through Qatar Investment Authority, a founding member of the "One Planet" Global Sovereign Wealth Fund, which has been established in accordance with the initiative of HE President Macron to promote green investments and accelerate efforts to take into account climate change issues in the investment sector and management of sovereign wealth funds.

Within the framework of the State of Qatars keenness to assume its role as an active partner with the international community I announce the State of Qatars contribution of an amount of US $ 100 million for the support of small developing island states and the least developed states to deal with the climate change, natural hazards, environmental challenges and to build the capacity to counter their destructive effects.

In conclusion, I wish to this summit success and the achievement of its desired goals for the good of humanity.

And may Peace, Mercy and Blessings of God be with you.