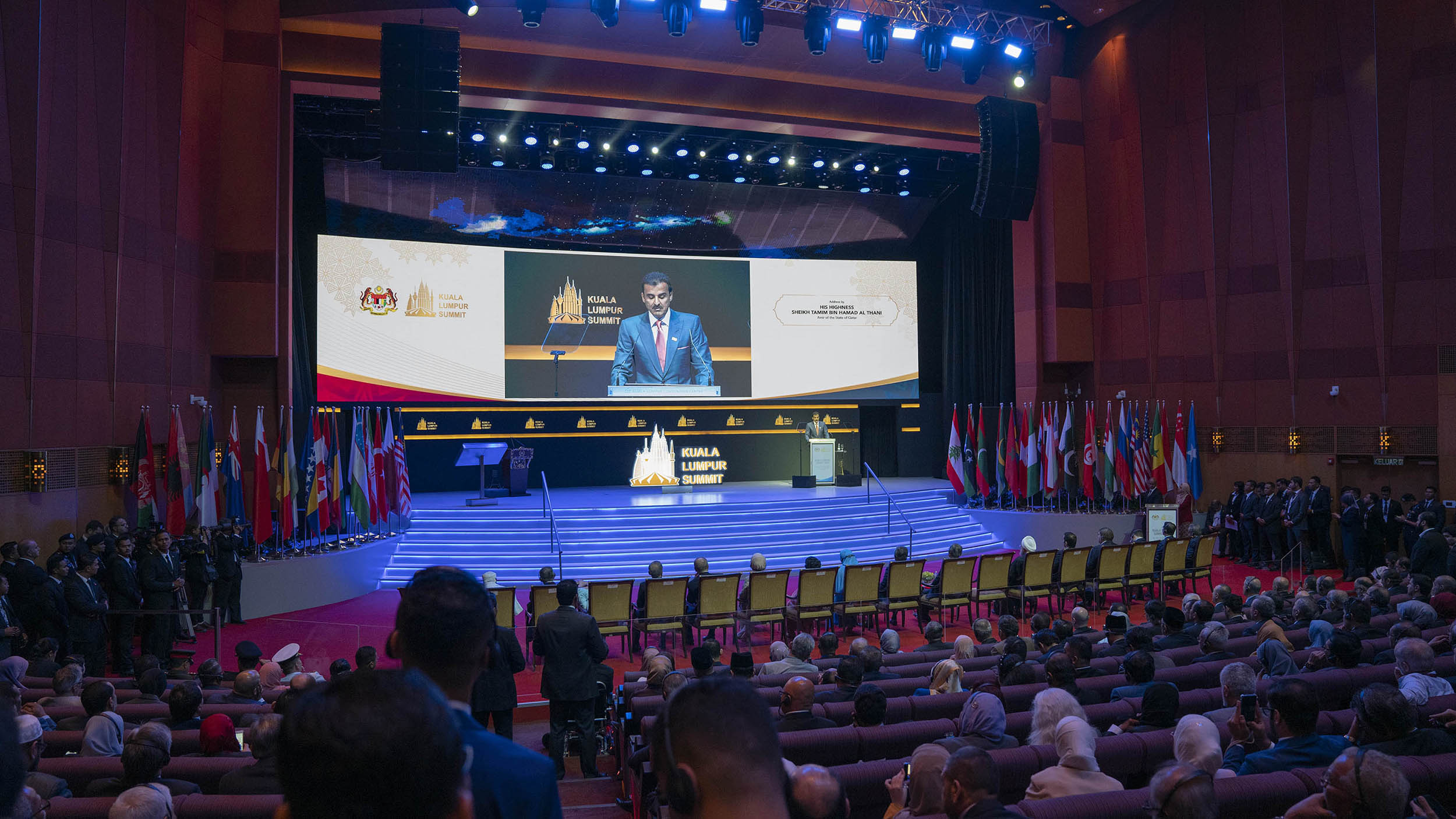 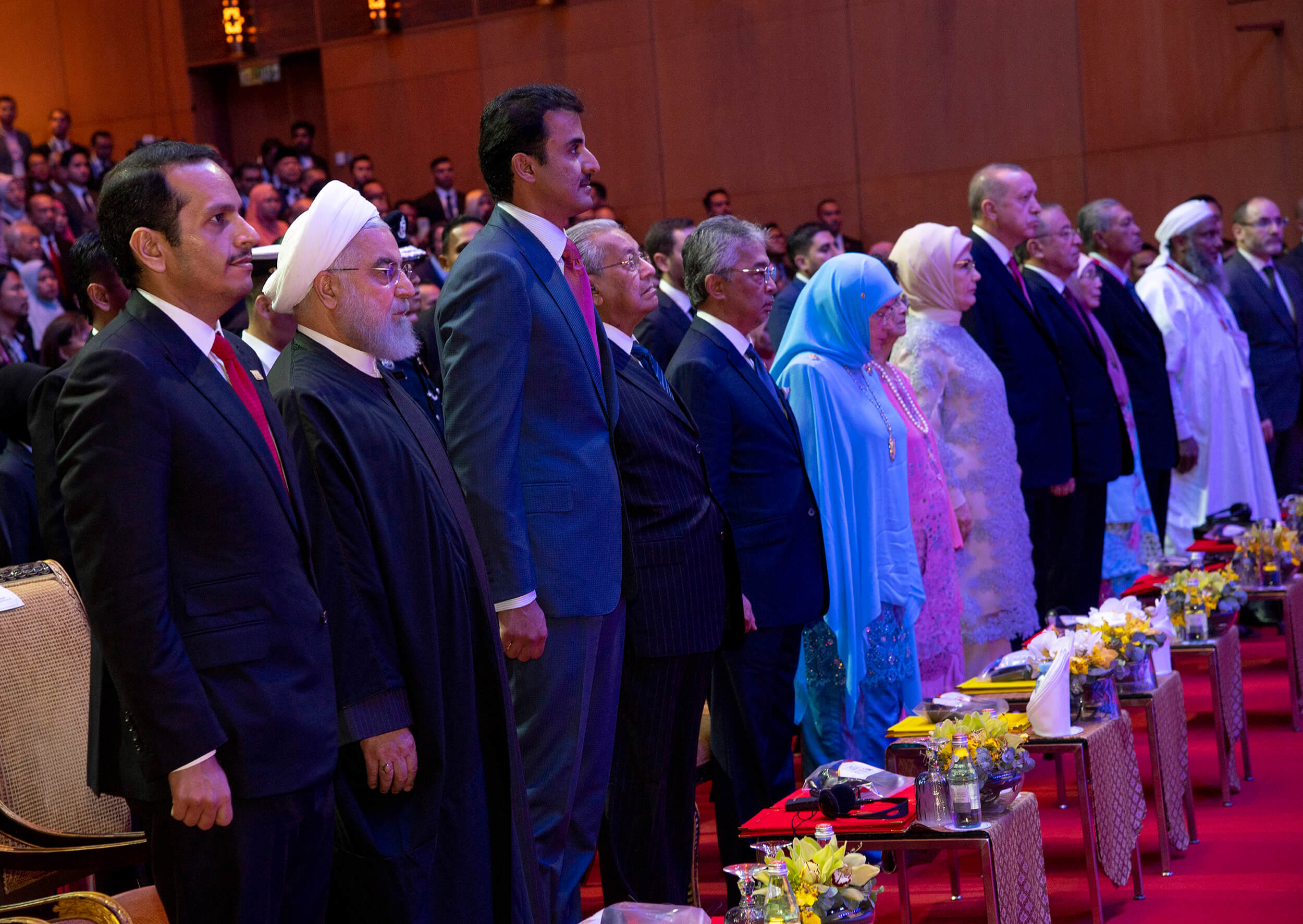 His Highness The Amir Sheikh Tamim bin Hamad Al Thani participated on Thursday in the opening session of the Kuala Lumpur Summit 2019, which carries the theme The Role of Development in Achieving National Sovereignty. HM King Abdullah Riayatuddin Al-Mustafa Billah Shah of Malaysia, HE President of the Republic of Turkey Recep Tayyip Erdogan, HE President of Iran Dr. Hassan Rouhani, and HE Prime Minister of Malaysia Dr. Mahathir Mohammed participated in the summit.

The session that took place at Kuala Lumpur Convention Center was also attended by their Excellencies ministers that are members of the official delegation accompanying HH the Amir, heads of the delegations of Islamic countries, a number of intellectuals and researchers in the Islamic world's issues.

The summit will focus on seven main topics, they are national development and sovereignty, integrity and good governance, culture and identity, justice and freedom, peace, security and defense, trade and investment, in addition to technology and Internet governance.

HH The Amir delivered on this occasion the following speech:

In the Name of God, the Most Merciful,

At the outset, I would like to thank His Excellency Dr. Mahathir bin Muhammad, the government and the people of Malaysia for the cordial reception, good preparation and organization of this promising summit and for providing it with all means of success.

This summit theme, "The Role of Development in Achieving National Sovereignty", reflects the great challenges facing the world in general, and the Muslim world in particular, with regard to issues of security, peace, development, good governance and human rights.

Various schools seeking to approach and address these issues have emerged, yet we cannot tackle them at this summit. Our meeting today does not emanate from a particular theoretical approach to these issues, but rather from the nature of the politicians and State leaders role that requires having faith in the political will and potential to effect change.

We cannot give up to structural difficulties or what are alleged to be cultural obstacles existing in our countries and societies. Also resorting to conspiracy theories to justify failure in any of the above areas is also a form of surrender. This does not mean that there are no external conspiracies and foreign interventions. But their use to justify failures and wrong choices is an expression of intellectual indolence and political incompetence. Also, the negative external factors, dubbed sometimes as conspiracies, often become effective and influencing under favorable domestic conditions.

Countries, where there is a Muslim majority, have proved by experience and practices that there is no contradiction between Islamic culture, development, good governance and human rights, and that, like other major civilizations, they can be incubators of enlightened and rational systems of governance; meanwhile other regimes justify underdevelopment, tyranny, and treading on human rights on the grounds of the Islamic culture of their peoples, although such justification in itself is incompatible with the spirit of Islamic civilization.

We treasure our civilization and religion within the framework of our adherence to our humanity and universal values, and there is no contradiction between the two issues.

In our development policy, we consider that our trust in the national identity and adherence to our moral values and our true Islamic faith is consistent with rationality in social and economic planning, openness to the world, and the universal human view of justice and human rights issues. Also this means tolerance of other beliefs and accepting pluralism and diversity in our world as a reflection of Gods enduring laws that govern His creation. In any case, we see fanaticism as not only an evidence of lack of self-confidence but rather a proof of an identity crisis.

Out of our firm belief in the importance of international cooperation for achieving development as a pillar of regional and international security and stability, the State of Qatar has spared no effort in fulfilling its obligations to provide development assistance, that is unfettered by political agendas, to developing countries to enable them implement their development programs, combat poverty and unemployment, develop education and improve health care.

The violent bigotry that some people try to attach to a particular religion and culture is, as the sequence of events in the modern time shows, a global problem that has not spared a society or culture from its affliction. It is a blight that may afflict all and is fueled by religious fanaticism, as well as non-religious ideology, despair, frustration, conditions of ignorance, poverty and unemployment. Therefore, its long-term confrontation must include addressing its roots.

Our topic is closely related to regional and international collective security issues, as stability is one of the most important conditions for development. It requires balanced relations between States based on common interests, shared regional and international responsibilities, mutual respect for sovereignty, non-interference in internal affairs, and no dictation on foreign policy.

Justice is one of the most important conditions for stability in conflict areas, so no settlements and solutions would last in the long run if they are not based on justice and fairness. In many cases, this is incomprehensible by many countries that are trying to impose disputes settlements according to the existing parameters of powers, and not according to the principles of justice. Therefore, our alignment with fair causes stems not only from the moral principles of international politics but also from the mutual interest in stability.

One of the most important sources of instability in our region is the neutralization and marginalization of the international legitimacy, and the attempt to dictate the will of the occupation by of force in Palestine, where annexation and settlement policies, including the Judaization of Jerusalem, continue. These are the policies that wipe out the Arab character of the city and provoke the feelings of Arabs and Muslims everywhere.

What disturbs the Arab and Islamic public opinion and a large part of the global public opinion regarding the cause of Palestine is that it is an unresolved issue of settler colonialism.

We suffer from double standards in more than one issue. There are double standards even in dealing with human rights, and the global conflict of axes makes some harbor war criminals who have perpetrated crimes against their own peoples, as allies, while being fought by others. However, situations may alter with the change of locations and interests.

We call for the endorsement of methods of negotiation and dialogue for resolving lingering issues, and we reject the use of methods of force, blockade, starvation and dictation of opinions. Adopting this approach requires a minimum of unanimity in granting greater power to international institutions where the right of veto does not prevail in favor of this or that country.

With the exception of justice based on international law, collective security requires a kind of rationality in the relations between States so that these international relations and other peoples' issues should not be subject to internal political rivalry between parties in each country, at a stage when populism and irrationality may become dominant in internal political considerations. Incitement against Islam and Muslims has recently become a populist tool for gaining votes. These are short-sighted internal party politics, yet it would make the relations with other peoples subject to irrational policies and whims in domestic politics, which negatively affects relations between States.

It has become evident that the relationships with the other within each State and the dealing with him on an equal footing while respecting differences and disparities is a test of the extent to which this country is civilized and developed. Just as we demand from communities in Western and other countries to deal with Islam and Muslims in accordance with the principles of democracy and human rights that they adhere to, and to criminalize racial abetting against Muslims as well, we should also expect Muslim States as well as Muslim and non-Muslim societies in the East to deal with their citizens and residents equally, regardless of race, religion and doctrines, and respect their religions and exclusivity. We must also consider citizenship and equality before the law as regulators of the interaction between the individual and the State, regardless of race, religion, gender, or origin in Muslim countries as well.

I pray to God Almighty to crown the deliberations of this summit with success and to guide our steps towards what is good for our peoples.

May God's peace, mercy and blessings be upon you.