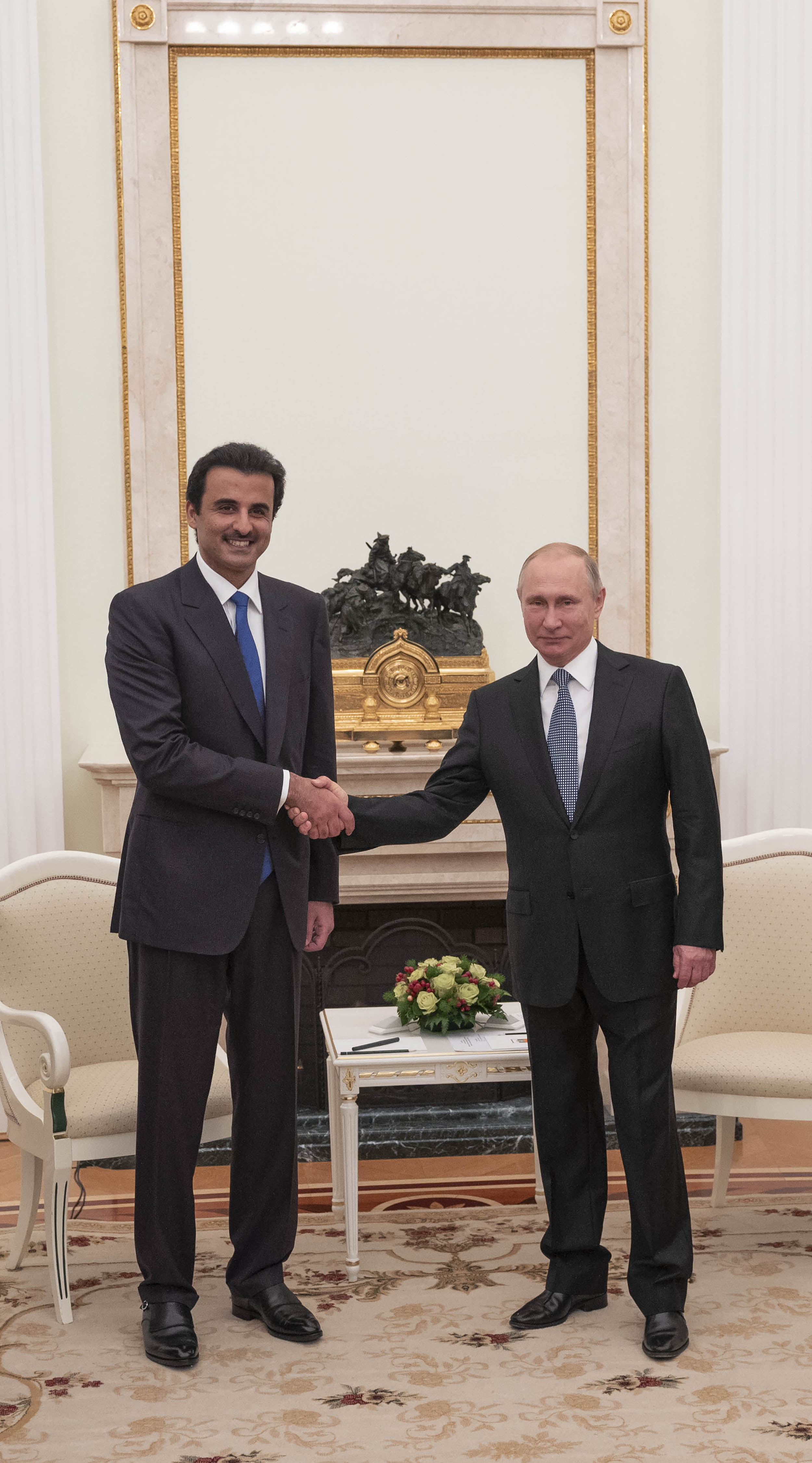 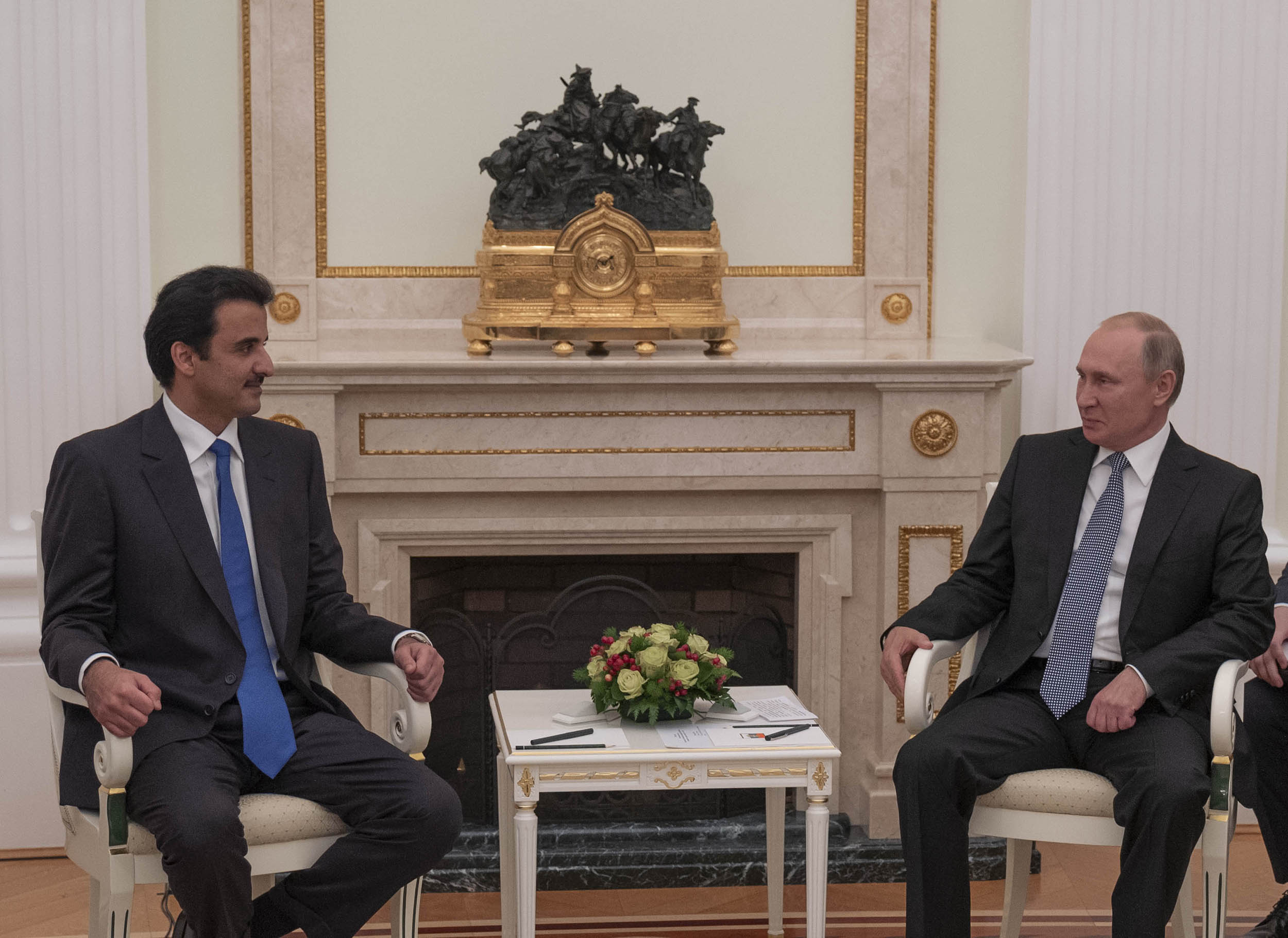 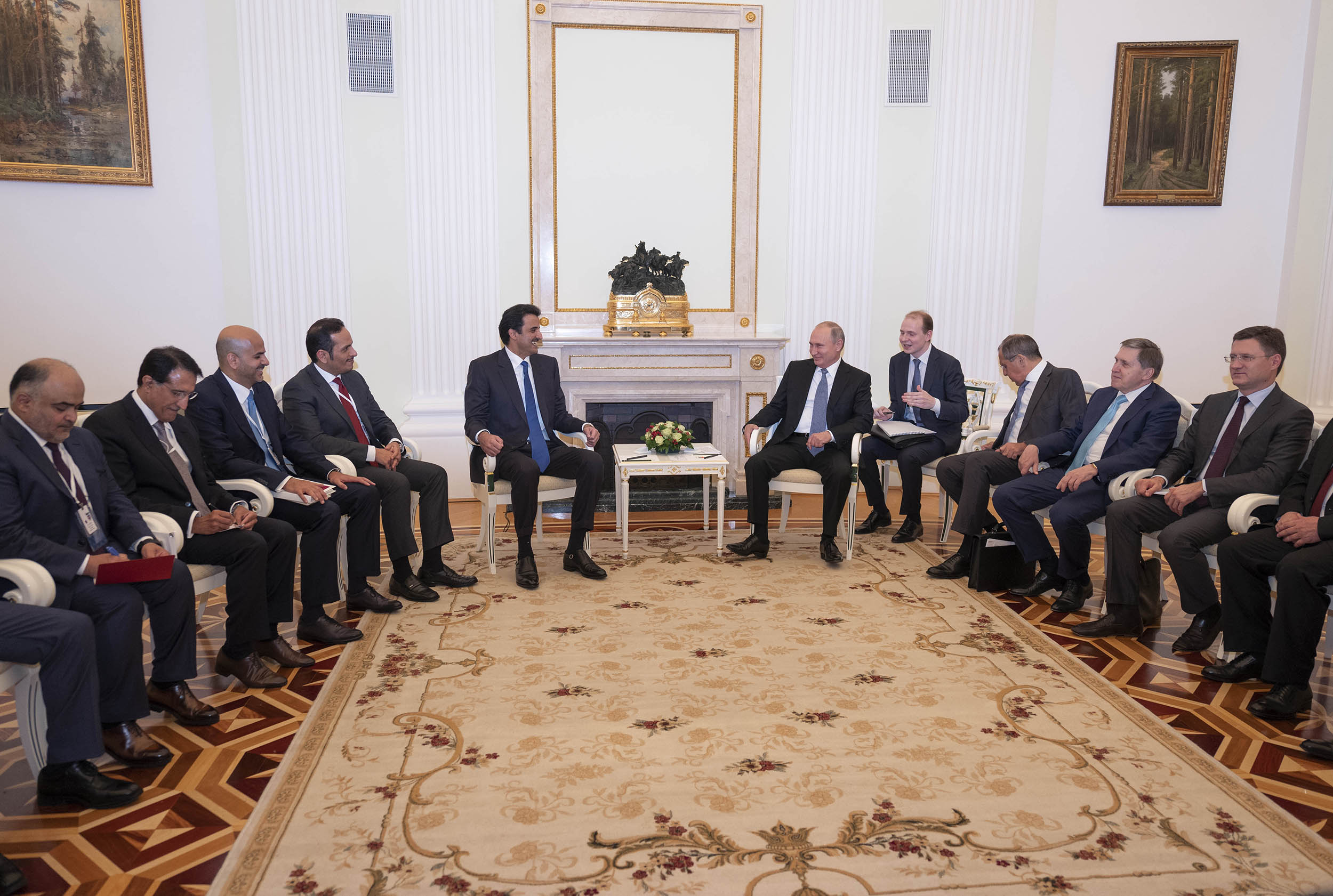 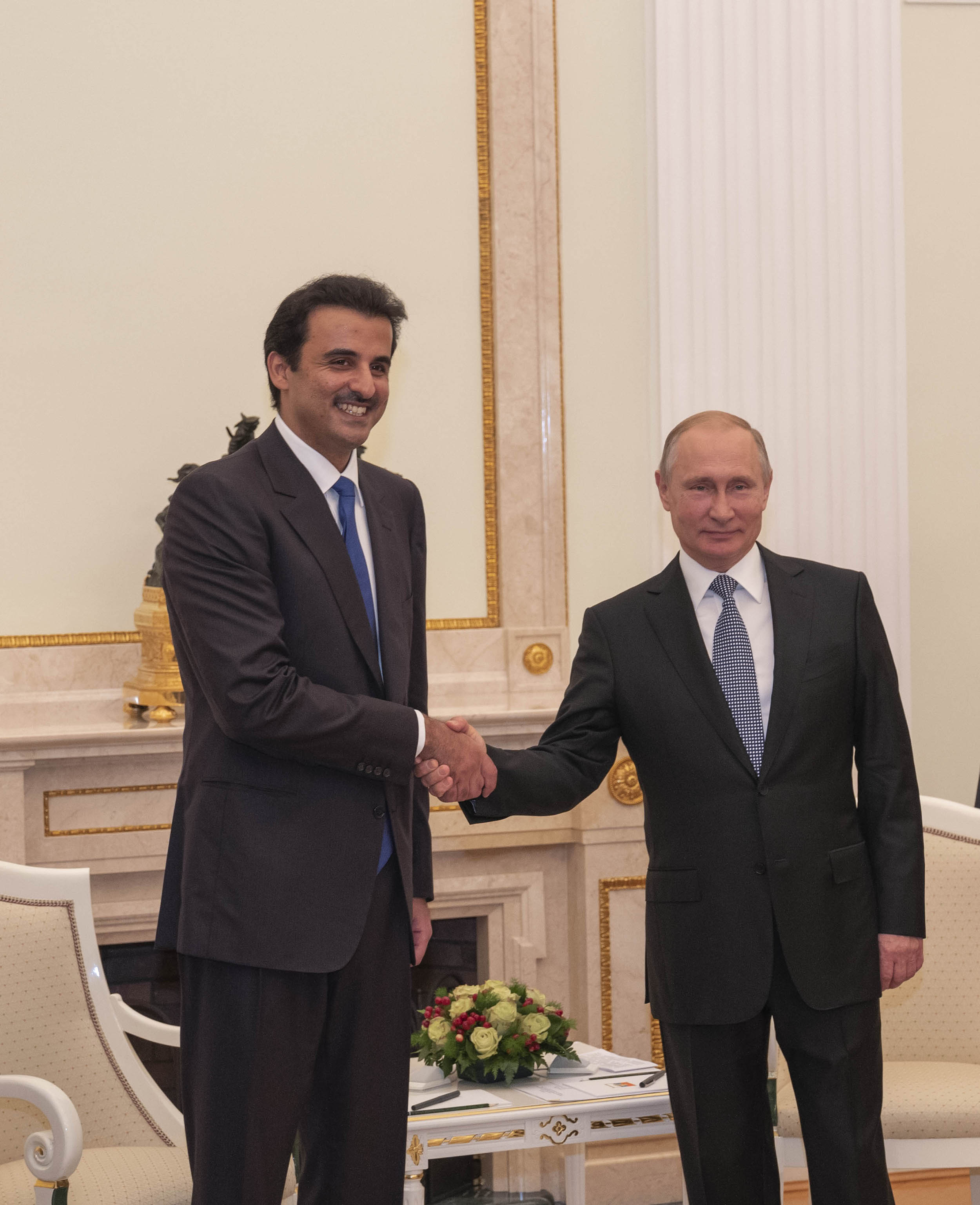 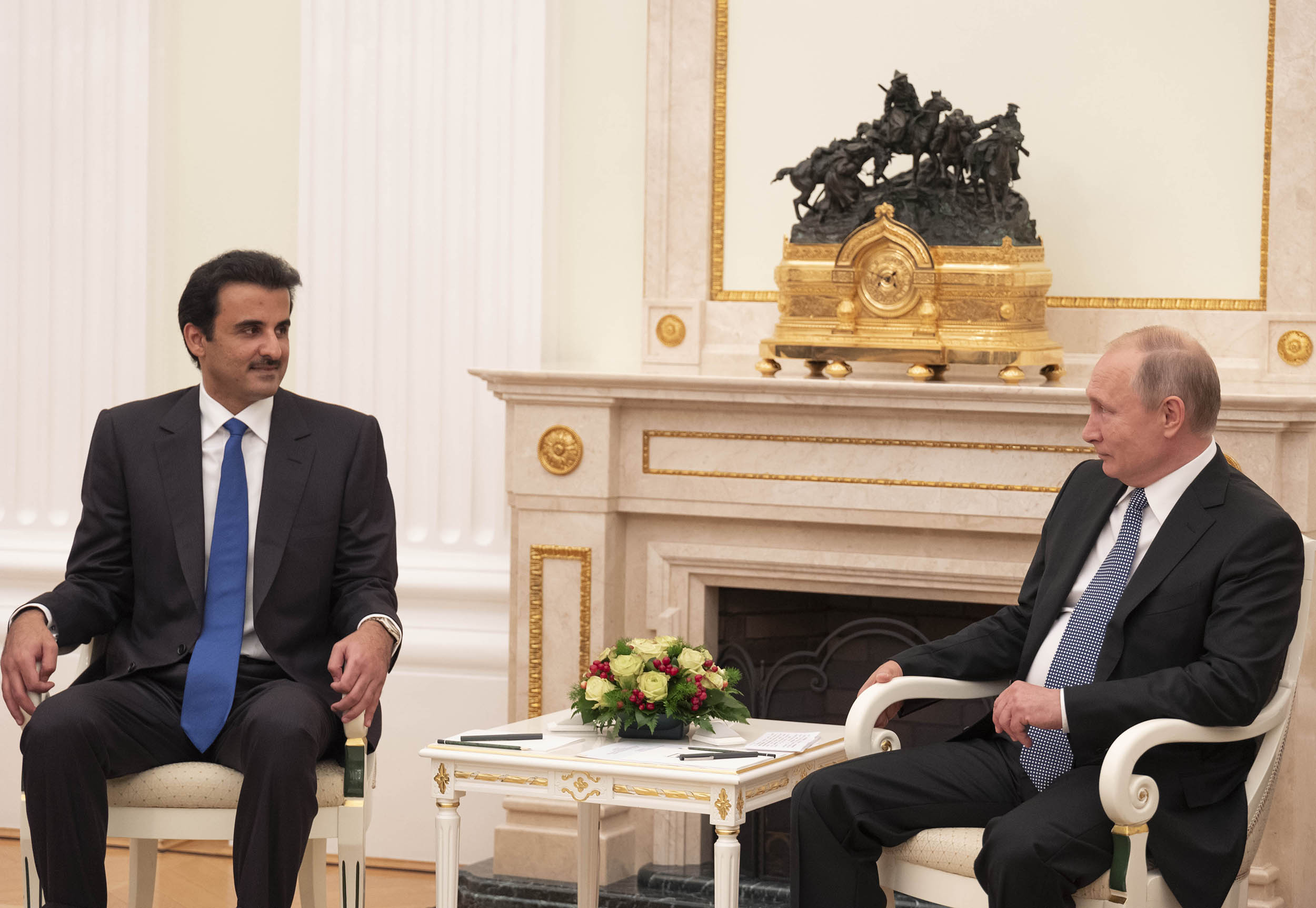 His Highness The Amir Sheikh Tamim bin Hamad Al Thani and HE President of the Russian Federation Vladimir Putin on Sunday held a meeting at the Kremlin.

At the outset of the meeting, HE President Putin welcomed HH The Amir and congratulated him for officially receiving the 2022 FIFA World Cup host's mantle. President Putin expressed confidence that the people of Qatar is able to make the next tournament a success, stressing his country's readiness to provide assistance in this area.

For his part, HH The Amir extended thanks to the Russian President for this invitation, and once again congratulated him on the organization of this great event.

HH The Amir affirmed that Qatar will work hard on the organization of the World Cup in 2022.

He pointed to a group of 200 people coming from Qatar who are working with the team of organizing the World Cup Russia 2018 and carrying out accompanying activities. His Highness thanked the Russian President and Russia for giving Qataris the opportunity of exchanging expertise.

His Highness explained that the World Cup Qatar 2022 is a championship for all Arabs, pointing out that the Arab region is going through difficult time, stressing that it is a great nation and will overcome all differences.

The meeting dealt with the close bilateral relations and means of developing aspects of cooperation between the two friendly countries, especially in the fields of investment, energy, defense, culture and sports.

HH The Amir and HE the Russian President discussed a number of current regional and international issues and exchanged views on them, especially developments in the Middle East, particularly Palestine and Syria.

The two leaders also discussed the Gulf crisis and need to resolve it through dialogue.

The meeting was attended by a number of Their Excellencies members of the official delegation accompanying HH The Amir.

On the Russian side, it was attended by a number of Their Excellences Ministers.