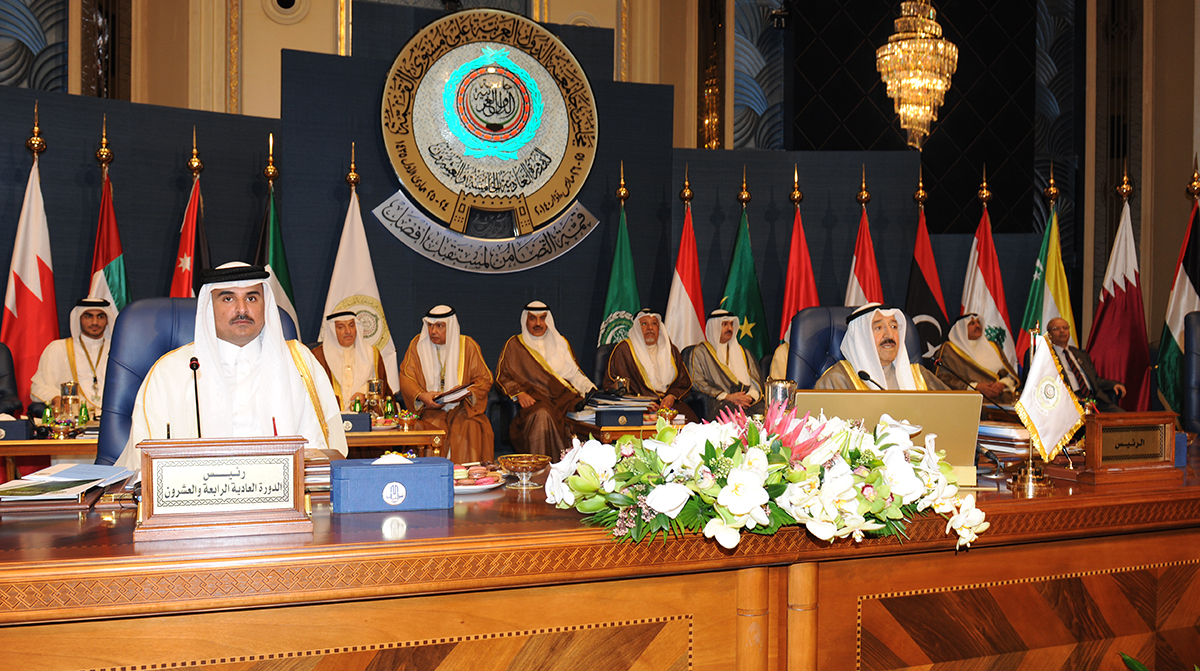 His Highness The Amir Sheikh Tamim bin Hamad Al Thani participated along with Their Majesties and Highnesses Leaders of Arab countries at the opening session of the Arab League Council meetings at the 25th session of the Arab Summit, under the title “Solidarity for a Better Future”, held at the Liberation Hall in Bayan Palace in the capital of Kuwait.

The opening session started with a recitation of holy verses from the Holy Quran and then HH The Amir, the chairman of the previous 24th session of the Arab Summit, delivered a speech in which he reiterated that the Palestinian cause and the Arab-Israeli conflict are the most pressing challenges facing the Arab nation noting that the Palestinian peoples' cause is a cause of destiny and existence to all of us as Arabs. HH The Amir followed by stating that security and stability would only be reinstated through a fair settlement based on the international and Arab legitimacy resolutions.

HH The Amir stated that he holds Israel accountable for not achieving the cherished peace via its non-adherence and evasion of implementing the international legitimacy resolutions, its procrastination and its adding new terms in each round of the negotiations.

HH The Amir stressed that Israel should recognize and admit that the sole solution for terminating the Arab-Israeli conflict and achieving comprehensive, just and lasting peace could possibly be achieved through Israel’s full and complete withdrawal from all the Arab and Palestinian territories and establishing the independent Palestinian state with Al Quds Al Sharif, the holy city of Al Quds, as its capital.

HH The Amir called upon all the Arabs to work for ending the unfair siege immediately and open the crossings before the Palestinians in Gaza to enable them exercise their life smoothly like the other human beings.

HH The Amir also asked the Palestinian leadership to terminate the state of division among them and place the supreme national interest above all other considerations through forming a transitional national coalition government that would carry out the constitutional and executive tasks to reinstate the national unity.

HH The Amir also called for holding a mini-Arab Summit in which the Arab states wishing to contribute to achieving the national Palestinian reconciliation would attend, expressing meantime his country's readiness to host such a summit.

HH The Amir also holds the Syrian regime responsible for the failure of the negotiations for ending the Syrian crisis, reiterating that suffering of Syria's children is a stigma and a smirch to the international community, stressing the need to take serious steps as per the Arab League related resolutions and the international references to terminate such a crisis and realizing the aspirations of the Syrian people who paid a lot and the dear for their freedom.