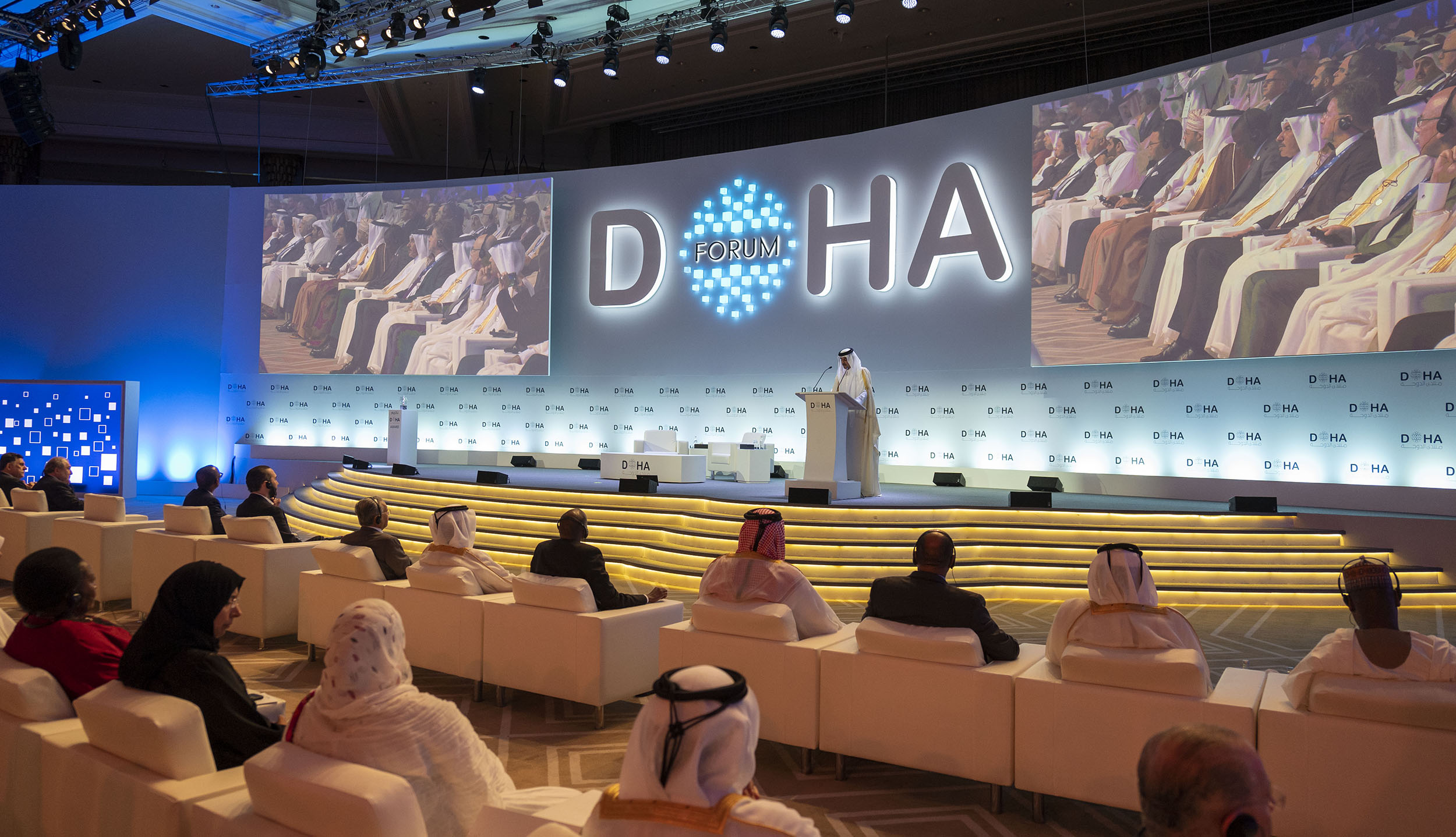 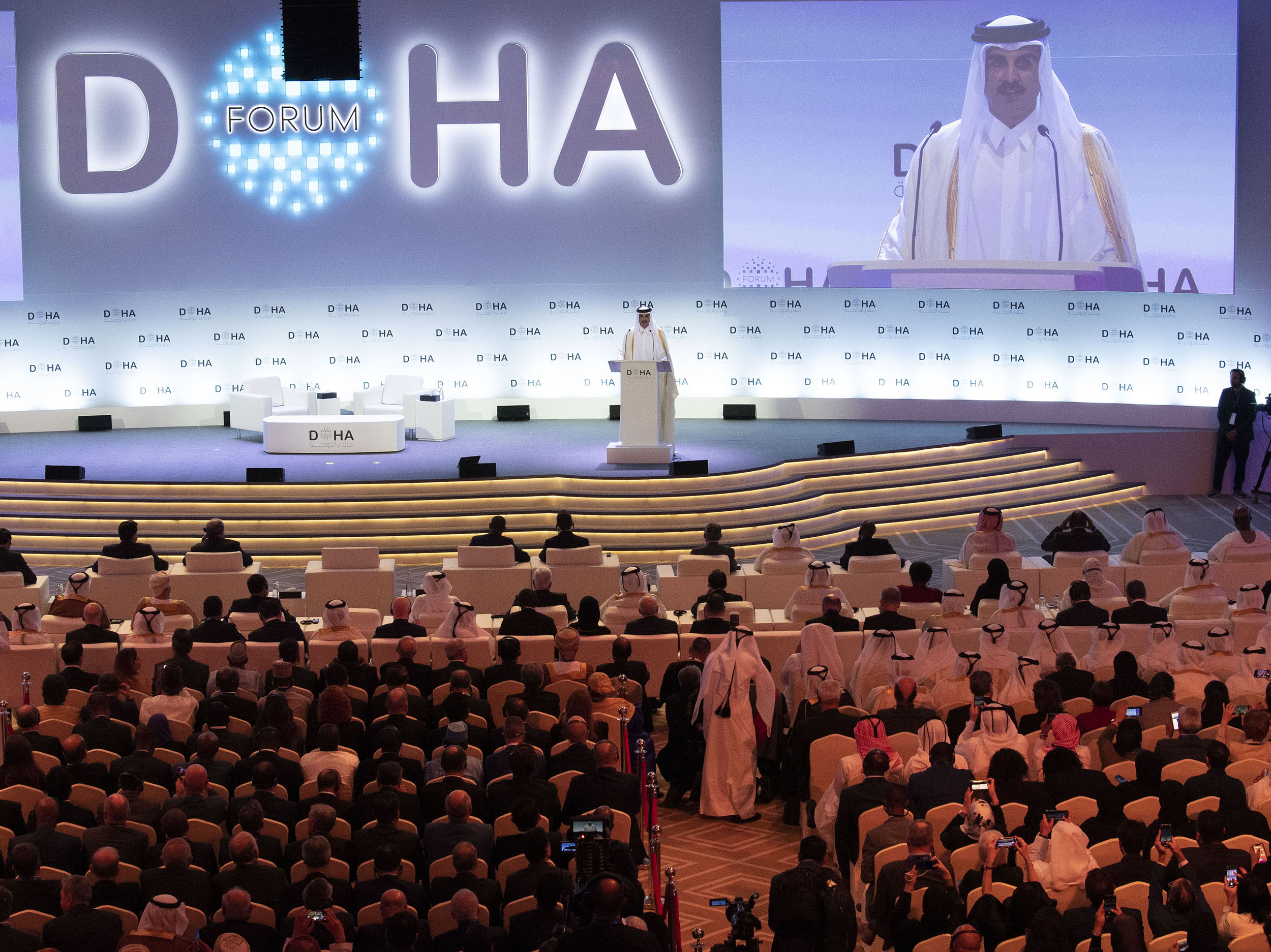 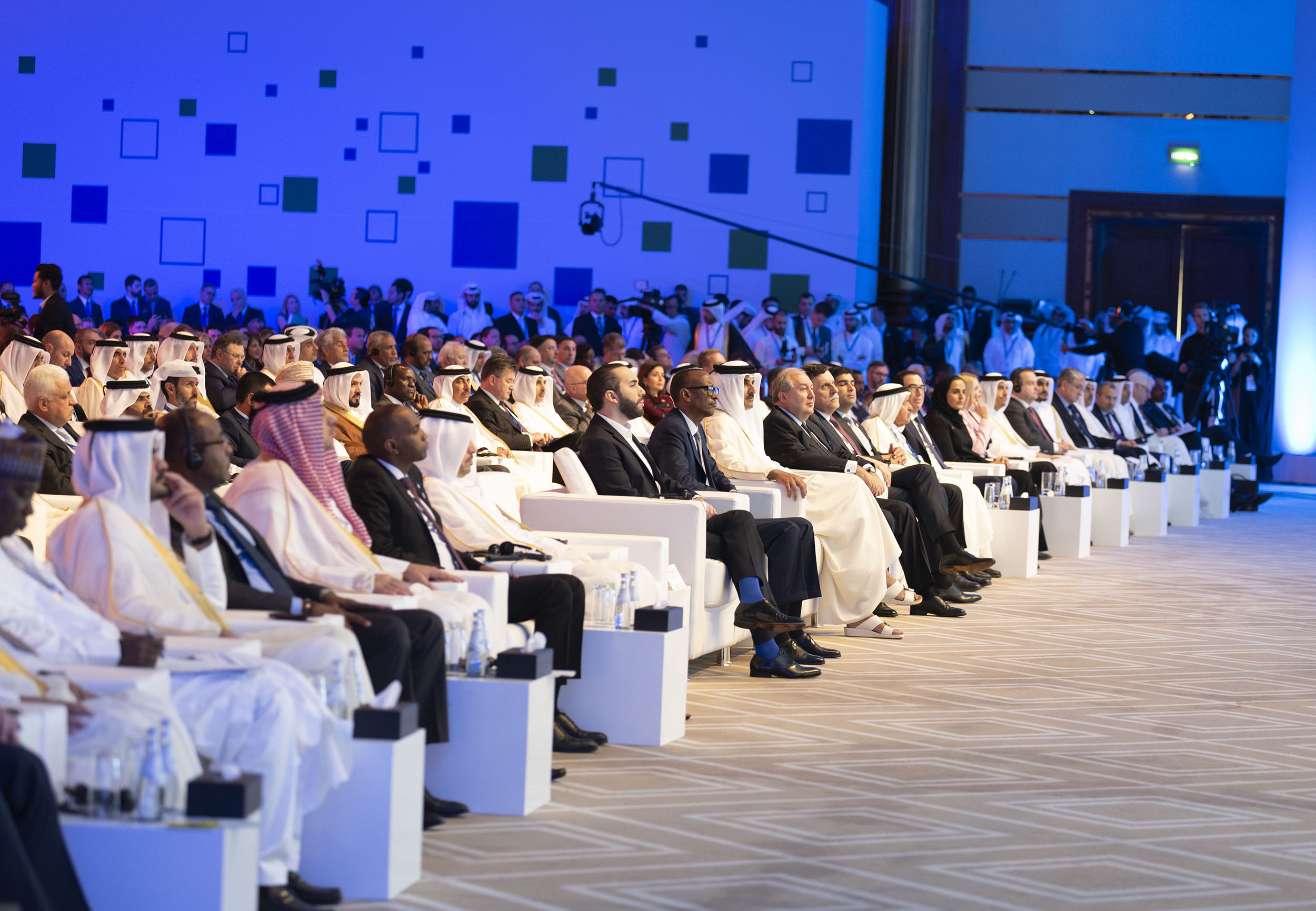 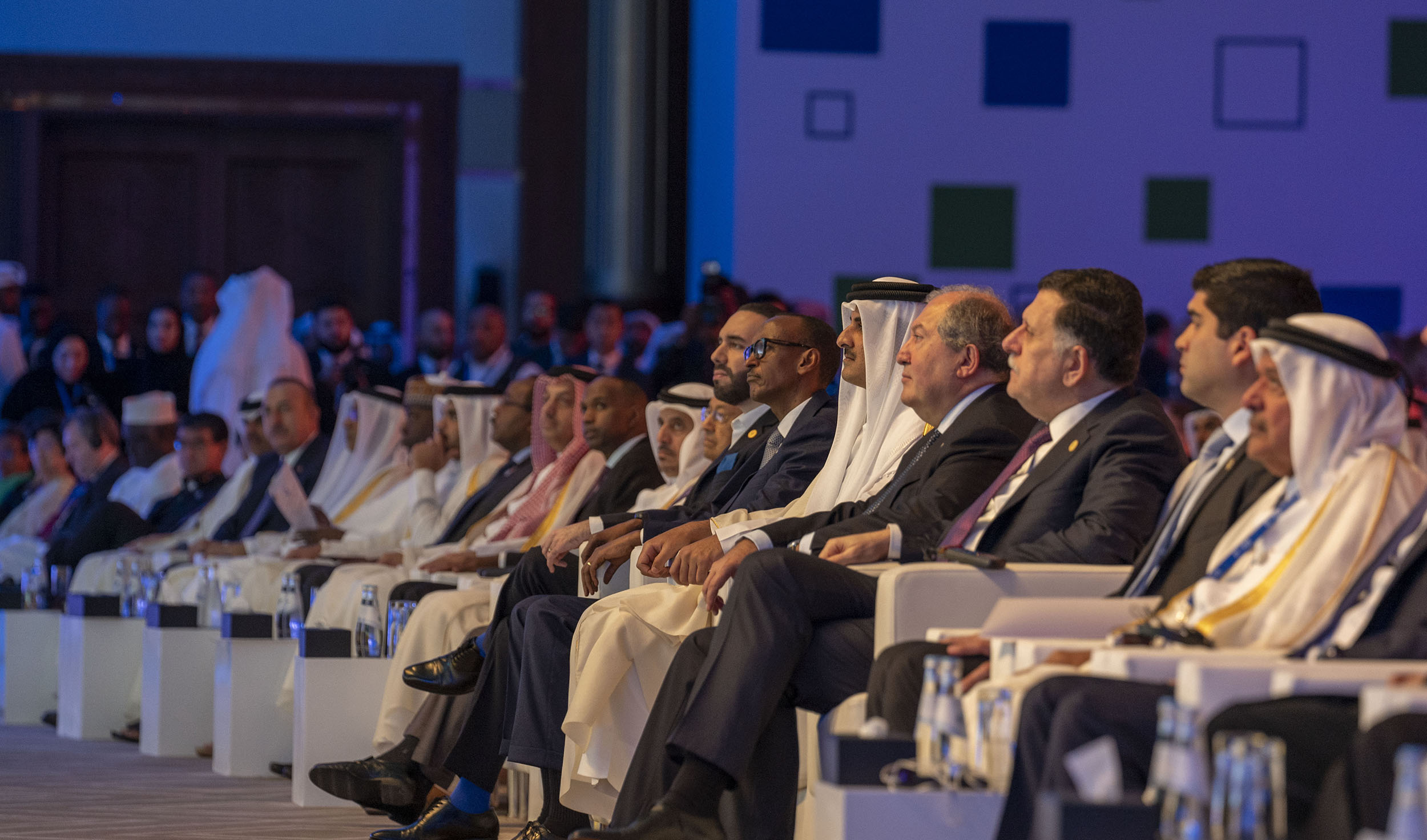 The opening was also attended by HE Prime Minister and Minister of Interior Sheikh Abdullah bin Nasser bin Khalifa Al Thani, a number of Their Excellencies Sheikhs and Ministers of sisterly and friendly countries and members of the diplomatic corps accredited to the State, an elite of decision makers, intellectuals in the fields politics, economics, energy, media, culture and representatives of international institutions and civil society organizations.

HH The Amir gave a speech during the session:

In the Name of God, the Most Merciful,
the Most Compassionate


I welcome you all to the Doha Forum, the platform we launched 19 years ago for dialogue and exchange of ideas.

At that stage discourse about a better future for humanity started when the two camps’ system and the cold war had come to an end, and then talk about the Millennium Goals, followed by the sustainable development goals has become possible, and hence the world and our forward-looking to its future seemed more optimistic.

The concepts of international community, international legitimacy, joint responsibility and multilateral action were on the rise. Yet, where are we today from all this?

The balance has been tipped in favor of the visions skeptical of the importance of the joint responsibility and international law as a universal reference, which in turn gave way to invoking the law of force in the international scene rather than working to strengthen the power of law.

The sources of defects that prompted many people to lose faith in the efficacy of the existing global systems and mechanisms, including double standards, must be addressed. Sincere efforts should also be intensified in propounding new visualizations for the next stage, especially after the consequences of abandoning the international legitimacy and law emerged in more than one place, including our region. This matter was the focus of this year's Doha Forum report, under the theme: "Reimagining Governance in a Multipolar World".

It is not yet clear whether what has happened since that stage is a transition from unipolarism to multipolarism, or is it a state of fragmentation and an attempt by major powers to disavow their duties and responsibilities.

If the situation was just a multipolarism, there would not have been a problem, as multipolarism does not prevent integration of roles and may enrich international relations with different perspectives; but if it is translated into a mere rivalry for influence between axes without agreed universal responsibilities and visions for the interest of the world, then this would tantamount to a retrogression even from the bipolar stage when two perceptions for a better world had competed in the shadow of mutual deterrence.

The common international vision that appeared to be clear at the beginning of the new millennium has blurred, whether from the perspective of the international legitimacy, issues of poverty, environment and climate or from not holding war criminals accountable. However, the problems and challenges have remained in place as they are and the environment and climate problems are exacerbating, and the issue of chronic poverty in vast areas across the world has not been solved, likewise the issue of occupation and annexation of others’ land by force.

As you know there is close co-relation between poverty, wars and the aggravation of asylum and immigration issues. Armed militias have taken advantage from axes’ conflicts and the process of holding war criminals accountable became complex.

These problems cannot be solved without coordinated international efforts and shared visions, likewise the issues of violent extremism which is not restricted to a religion or a race, and which is indiscriminate in targeting the innocent, and making no distinction based on gender, racial or religious grounds.

We, in Qatar, have committed ourselves not to just criticize this situation but rather try to contribute to answering these questions, even if only partially.

In addition to our policies which are based on respecting the international law and international legitimacy and contributing to solving conflicts peacefully through mediation and providing a space for dialogue, we have also established platforms such as the Doha Forum and the Doha Conference on Interfaith Dialogue, which we launched 16 years ago for building dialogue bridges.

Doha has witnessed this year alone important international conferences such as World Inter- parliamentary Union and the International Conference on Disability and Development which took place last week in co-operation with the United Nations.

At the relief and development level, we announced on the sidelines of the United Nations General Assembly session last September the allocation of $100 million to small island states to cope with climate change. The State of Qatar has also pledged to provide education to one million young girls in conflict areas by the year 2021. In addition to the efforts of non-profit Qatari organizations, such as the Education Above All Foundation which works alone to provide education to 10 million children in conflict areas around the world. This is a modest effort in a world where around 262 million children worldwide are outside educational institutions, in addition to conflict zones where 27 million children are deprived of their basic right to education. But we are doing our part.

Qatar Development Fund contributes around $600 million annually to relief, educational and health projects in about 59 countries across all continents. Also, Qatar Charity contributed about $ 400 million to development projects for the benefit of about 10 million people in 50 States.

There is no doubt that there are many difficult challenges that humankind is going through, but there are also an abundance of goodness, beneficence, sincerity, determination and innovation that can be relied upon. So, we must all commemorate goodness and human achievements wherever they are found.

It is precisely for this purpose that I am pleased today to initiate a new tradition of honoring a global personage in this forum. This year’s personality is a role model of good governance.

He has managed to achieve a quantum leap in economy, education and production in his country. He also fought against class discrimination to make education and health a right for all of his countrymen while promoting religious coexistence and communal peace, as well as fighting corruption, aligning with the just causes around the world, in addition to his determination that neither recognize time nor age. We stand, without exaggeration, in front of a young man who embodies ambition, achievement and perseverance in every sense of the word, although he is over the age of ninety years. We are standing before a sage who reflects wisdom, insight and patience, in every sense of these words.

This year we honor my dear brother, His Excellency Dr. Mahathir Mohamad, Prime Minister of Malaysia, for his entire accomplishments, and I invite everyone to join me in greeting him.