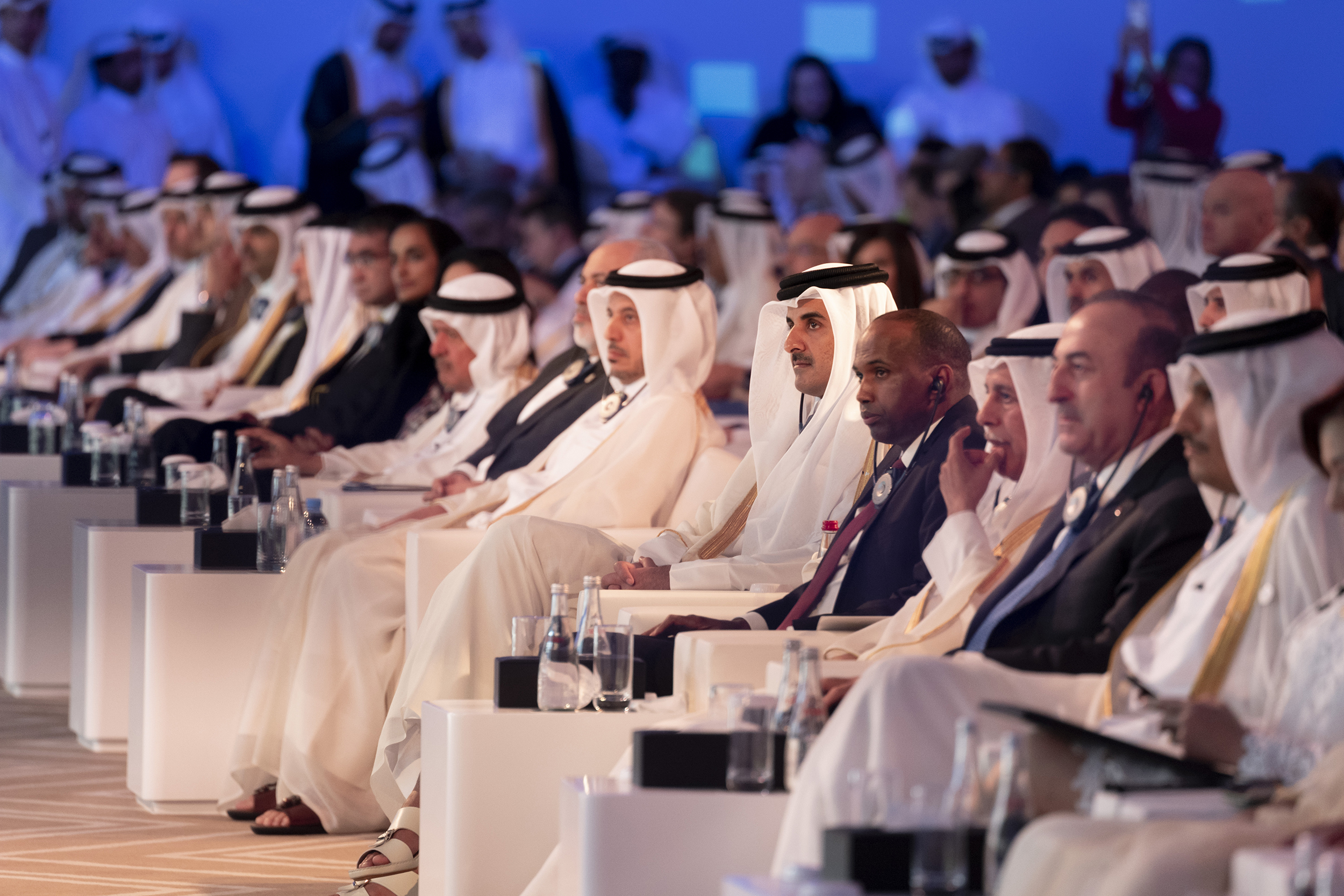 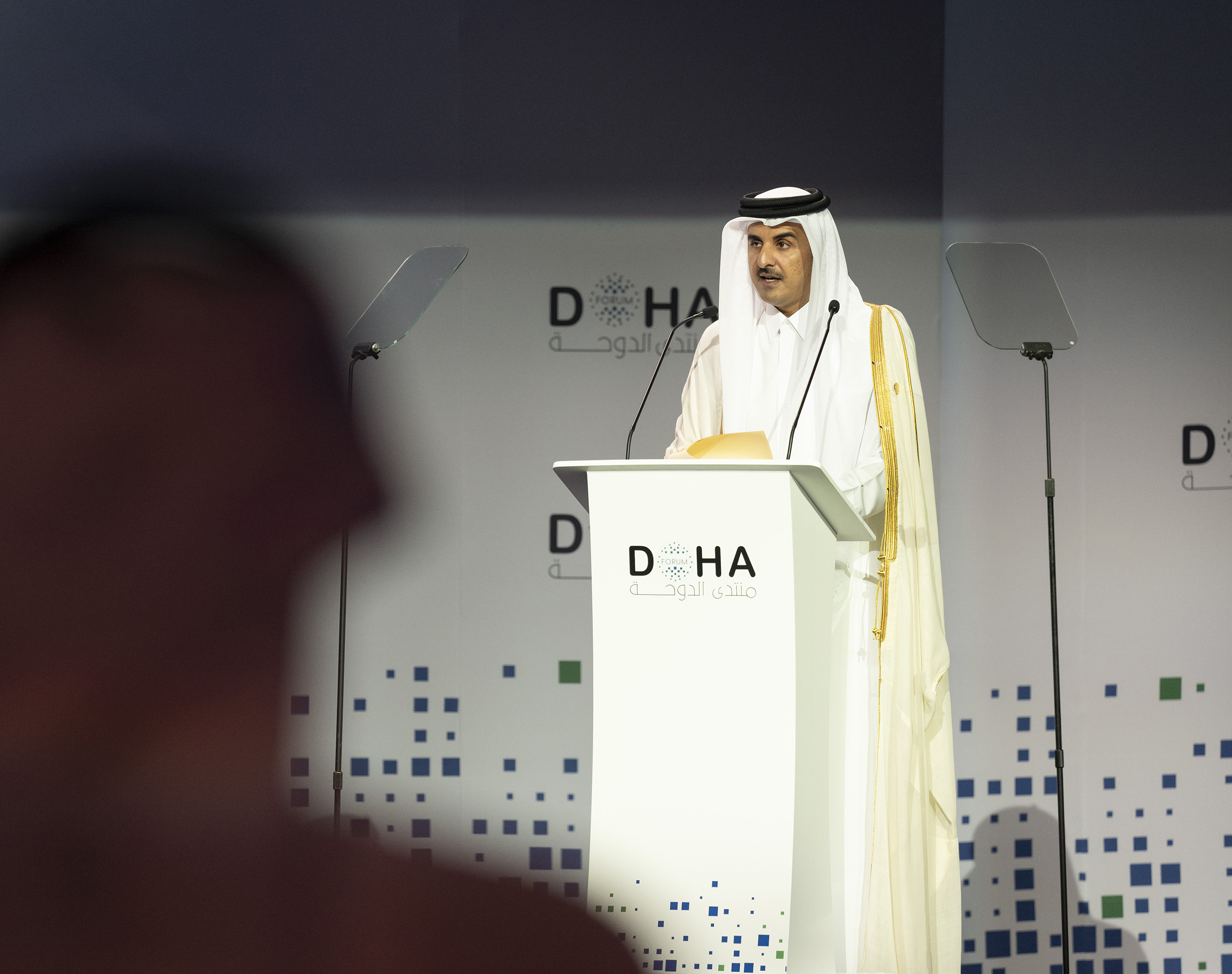 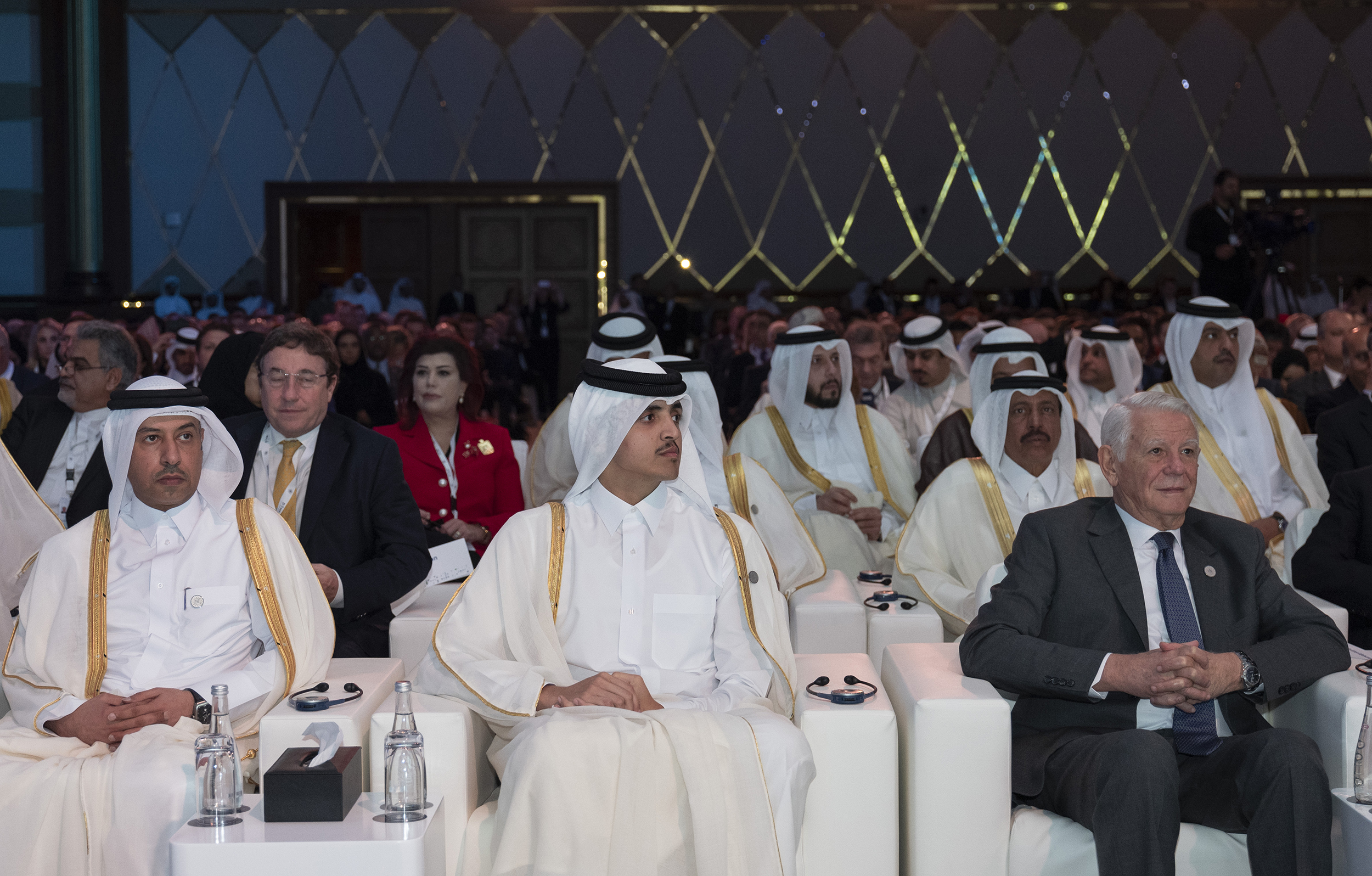 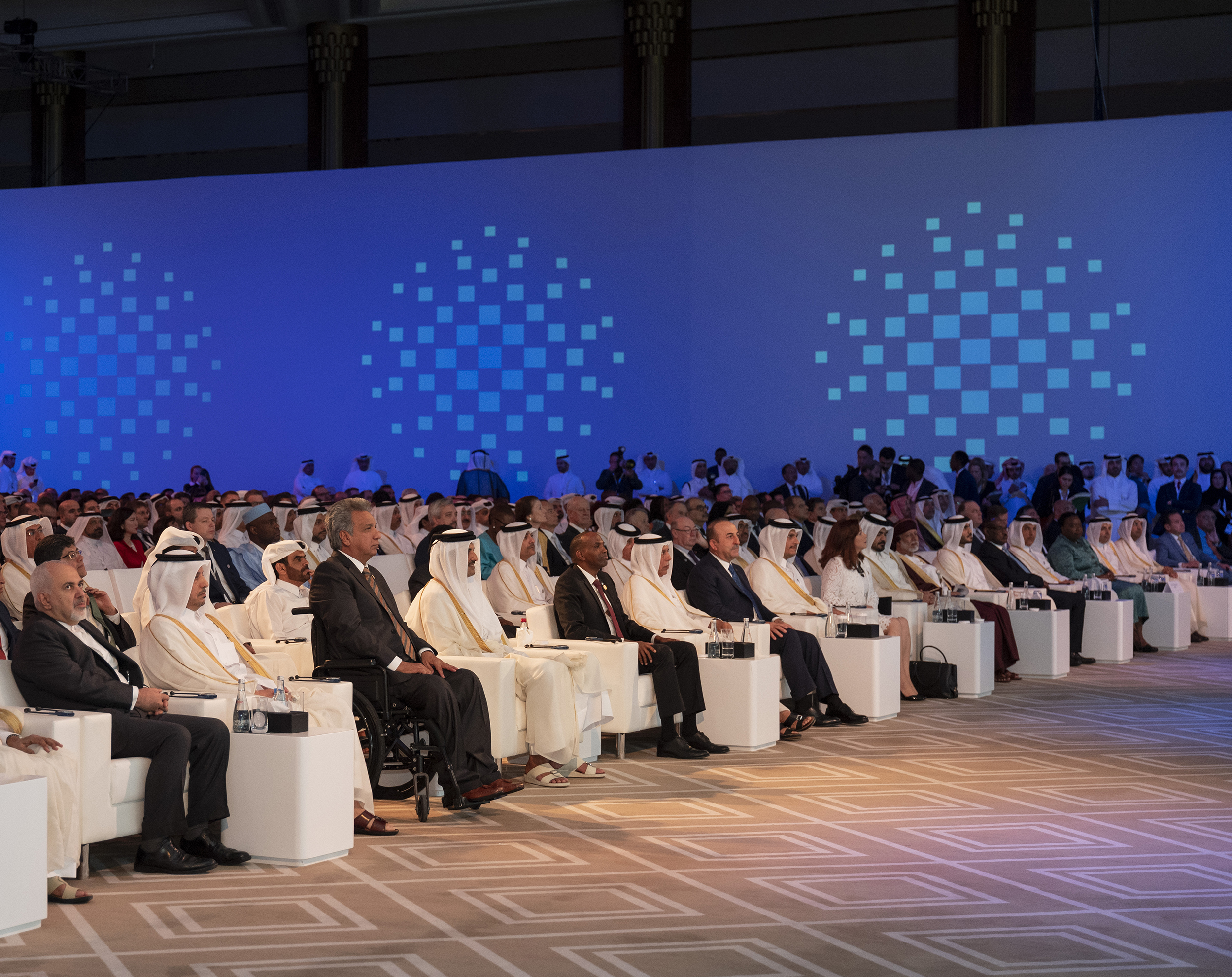 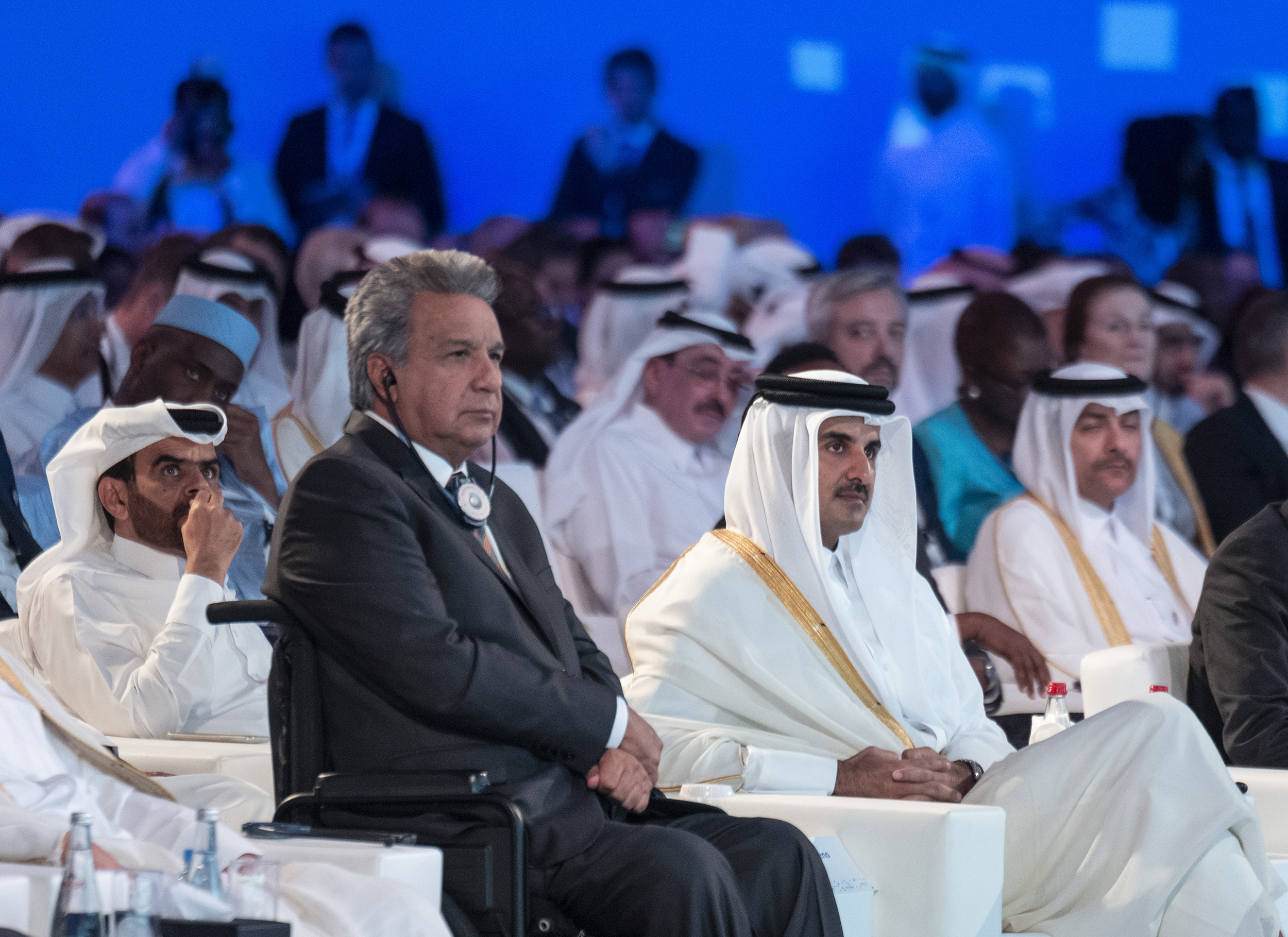 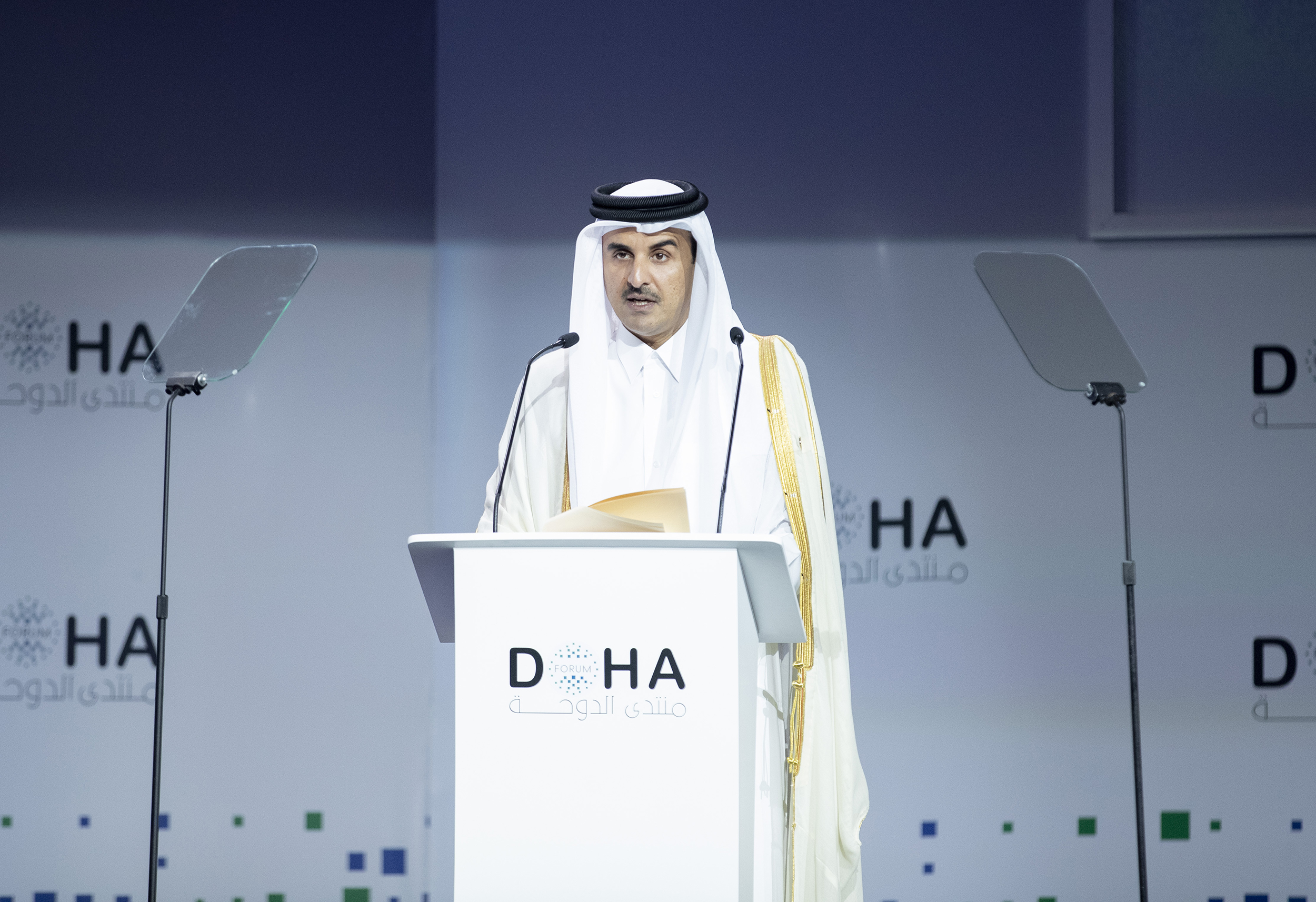 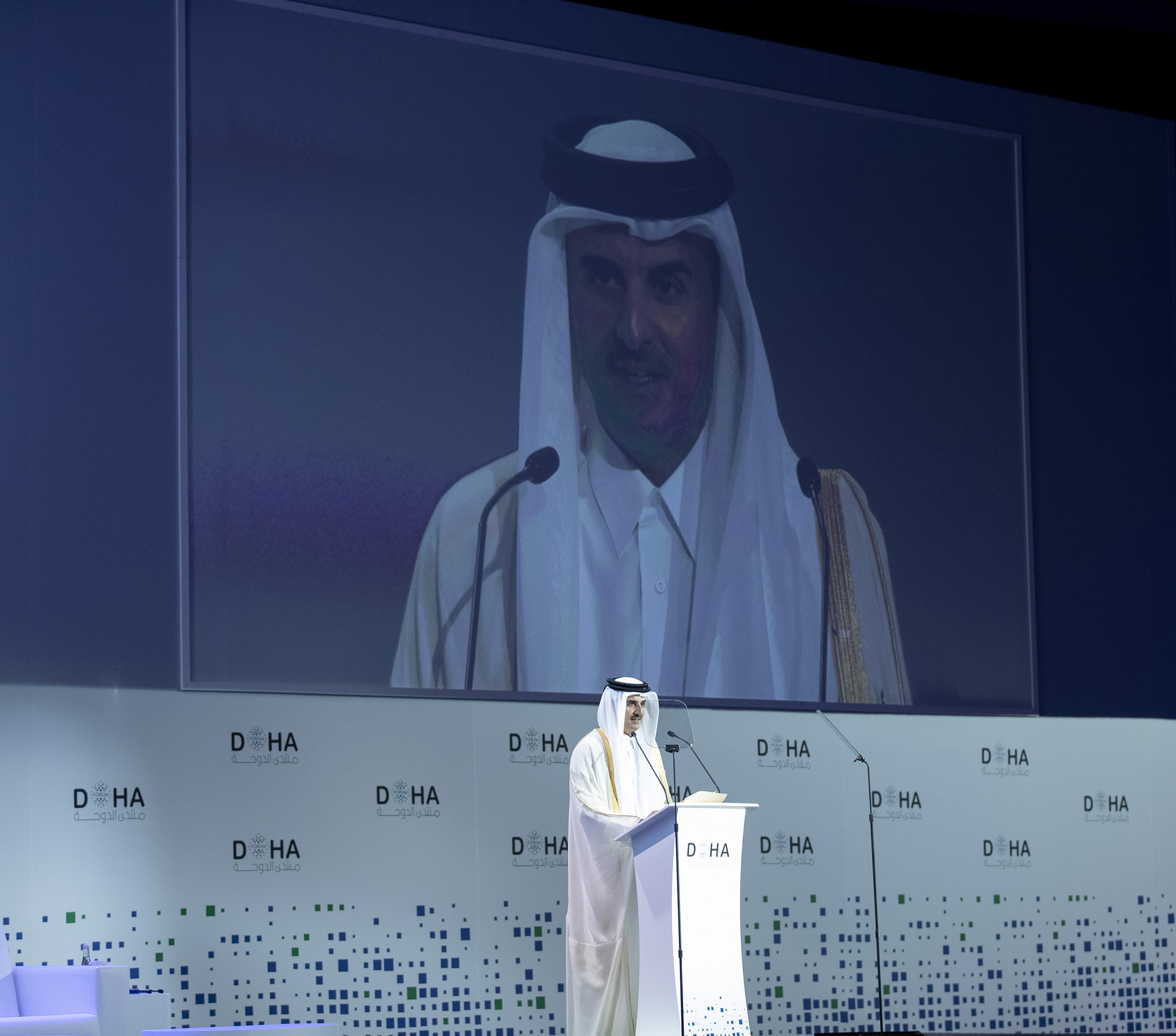 His Highness The Amir Sheikh Tamim bin Hamad Al Thani inaugurated Saturday the opening of the 18th Doha Forum under the title of "Shaping Policy in an Interconnected World." HE President of the Republic of Ecuador Lenin Moreno Garces, HE Prime Minister of the Federal Republic of Somalia Hassan Ali Khairi, HE President of UN General Assembly Maria Fernanda Espinosa Garces, and a number of their excellencies ministers from different Arab and foreign countries all attended the opening, which took place at the Sheraton Hotel this morning.

HE Prime Minister and Minister of Interior Sheikh Abdullah bin Nasser bin Khalifa Al-Thani, HE Speaker of Shura Council Ahmed bin Abdullah bin Zaid Al Mahmoud, and their excellencies ministers and heads of diplomatic missions accredited by the state all attended the meeting.

The opening was also attended by a number of leading intellectuals, academics, media personalities, representatives of regional and international organizations, leaders from the private sector, and representatives from Non-Governmental Organizations.

HH The Amir gave the following speech to mark the occasion:


In the Name of God, the Most Merciful,
the Most Compassionate

Your Excellencies,
Ladies and Gentlemen,

I welcome all of you to the 18th Doha Forum, which will address a number of the most important economic and social issues as well as the political challenges in our world today.

His Highness the Father Amir launched the Doha Forum in 2000 as a global dialogue platform at the advent of the new millennium when the United Nations heralded principles of a new era of international cooperation that has gained the international community’s consensus. In the aftermath of the cold war and conclusions drawn by the world from the massacres in Rwanda, Burundi and the Balkan, it seemed that an international security order is in the making to enable also cooperation that would be marked by integrated efforts to find out solutions to various challenges in the fields of education, health and development. But there was a concurrence of challenges and crises facing the world; from September 11 events and the spread of terrorism, violence and extremism, to the global financial markets crisis, the phenomenon of climate change and global warming. And we have moved from talking about cosmopolitanism to concern over politicizing xenophobia by the populist movements that rally the public along ethnic , national, religious and sectarian affiliations; and we have also moved from being optimistic about market globalization and elimination of borders to dealing with protectionist economic policies.

The exclusionary and totalitarian tendencies have recurred to overwhelm our world and usher in regimes that do not recognize the least basic human rights.

The gravity of these challenges has exacerbated due to the increasing political tensions engulfing the current world order with their negative impact on international cooperation, the selectivity in dealing with some issues and resorting sometimes to the use of force, as well as the growing racism in all its forms. In this context, repression, despotism, double standards that render the principles of justice devoid of its essence, in addition to the violation of human rights and fundamental freedoms have become a threat to humanity or what can be described as human security.

Stability should not be based on repression and injustice, as true peace is based on justice, and not on occupation. Also the narrow concept of security poses a threat to security itself, because the lack of human security falls back to threaten the very security and stability in their narrow sense. And as economic development can not be achieved in the long run without human development, it is essential to achieve security in all its economic, political, environmental and societal dimensions.

For us, these are not theoretical statements. In the Middle East, we have our share of challenges and crises, from the Palestinian issue, the Arab-Israeli conflict to the Iraq war and the Arab uprisings, which were universally known as the Arab spring; and from migration and unemployment-related problems to the issues of communal security, food security and other challenges.

In the midst of all these challenges and crises, it has been proven that no solutions were culminated in success beyond the set of universal values reached by humanity after the Second World War on the one hand, and after the battles of liberation from colonialism on the other hand. They are the values which  should not change when circumstances and times change. These universal values have been incorporated in the United Nations Charters and principles aimed at maintaining international peace and security, resorting to dialogue and peaceful means of settling disputes, rejecting the annexation of the territories of others by force, as well as the right to self-determination of peoples, non-interference in the internal affairs of  States and rejection of all forms of racism and discrimination, respecting  human  rights  and  citizens, upholding  the values of justice  and equality, renouncing extremism and terrorism, and promoting peaceful coexistence and international cooperation.

The sponsors and advocates of this narrow-minded exclusionary thinking have missed that the technological advancement and open cyber space have made it difficult to monopolize views and muzzle people.

Out of our belief in the importance of views, the necessity of dialogue and the inevitability of diversity, we have been keen to keep the dialogue forums and networking platforms active and open to exchange views in a free environment for all, irrespective of their intellectual affiliations and political perceptions, and this forum is a relevant epitome.

Dialogue is what bridges the gap between adversaries, no matter how intense the differences are, it is the point of inception and the point of conclusion in this difficult time.

And this applies to the Gulf crisis, which is represented by the blockade on our country. Our position towards solving this crisis has remained unchanged; lifting the blockade and settling differences through dialogue based on mutual respect and non-interference in the internal affairs of other countries. The issue of coexistence and good neighborliness among nations is separate from any other issues.

You have an agenda marked by richness and inclusiveness in light of the challenges facing the international community.

I hope that the deliberations of this forum will contribute to the crystallization  of visions on how to deal with the important issues and topics that are brought up in it for discussion.

I reiterate welcoming you to Doha and wishing  you a pleasant stay.

May Allah’s Peace, Mercy and Blessings be upon you.