HH The Amir Attended the graduation ceremony of the 12th class of officer cadets from the Ahmed bin Mohammed Military College. 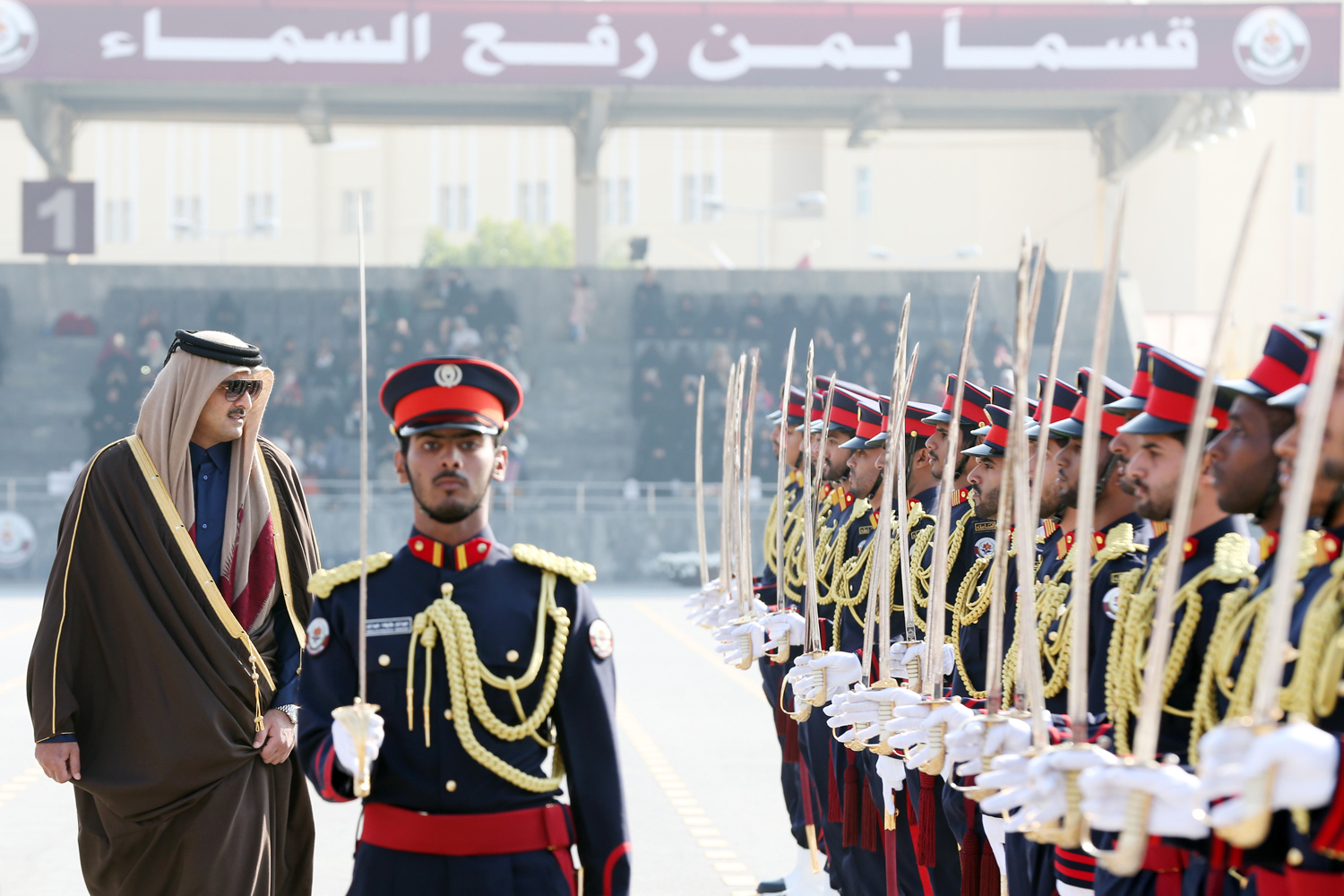 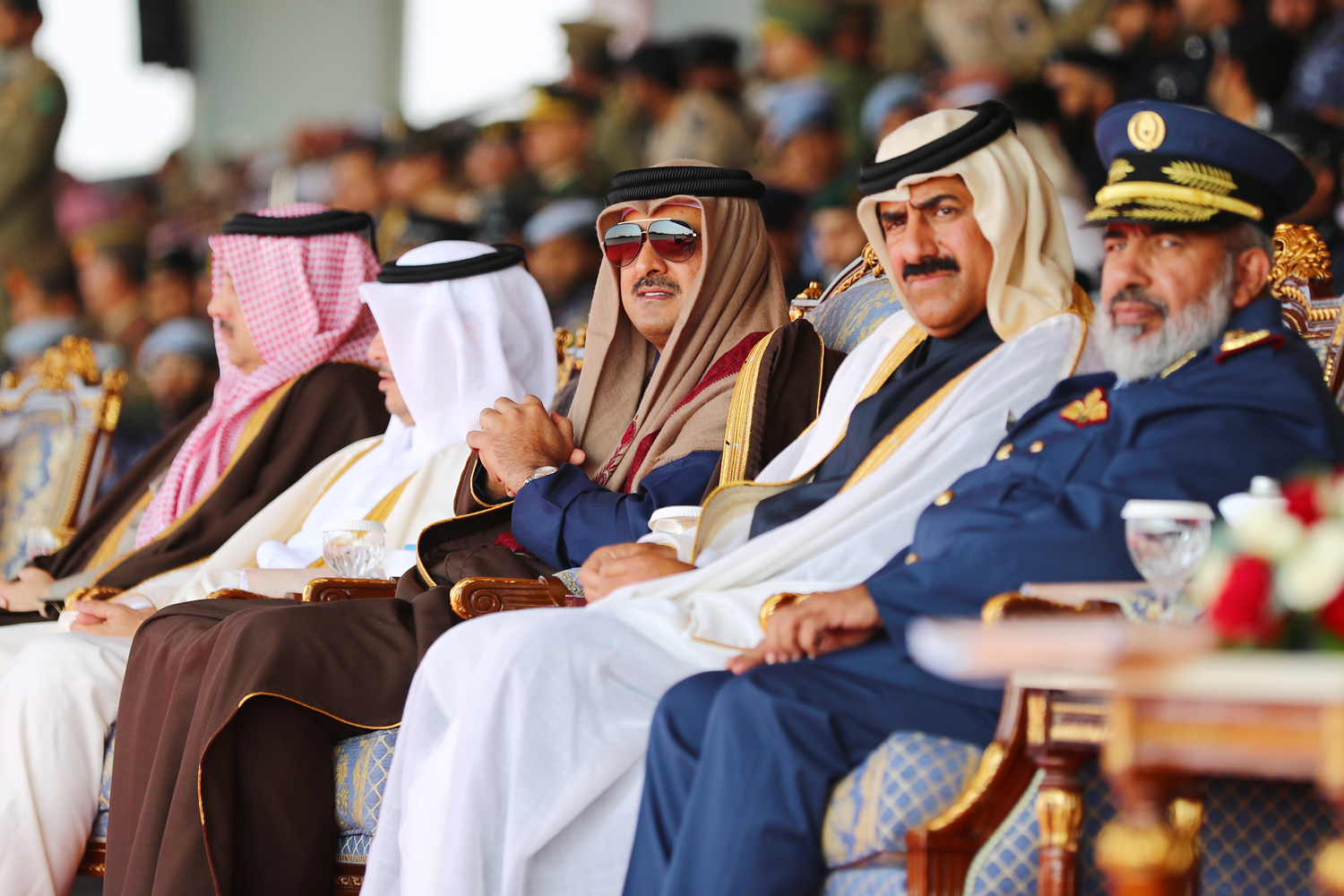 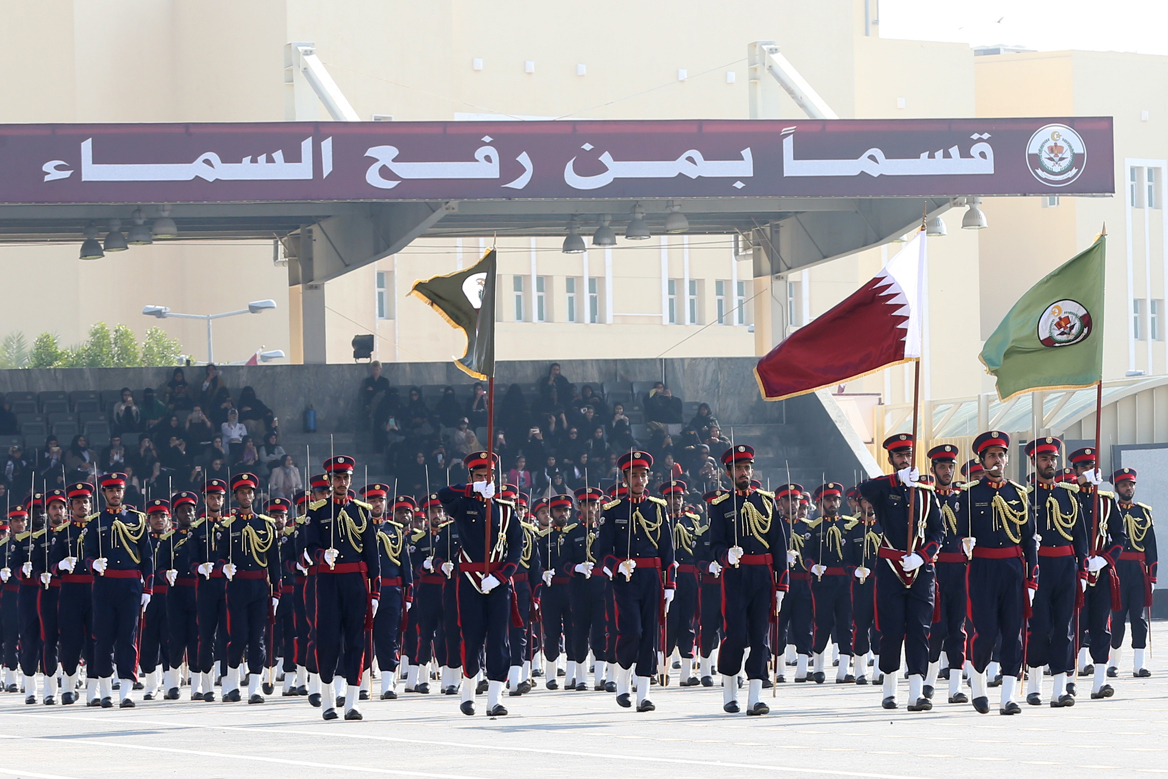 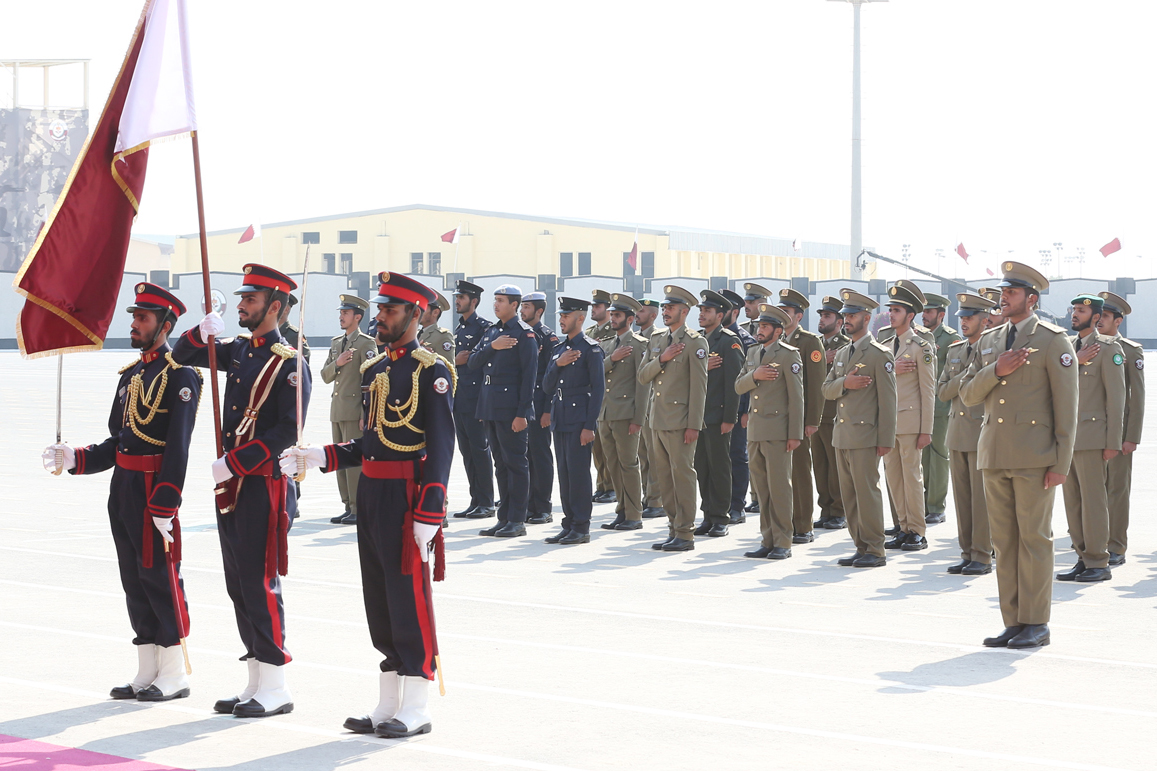 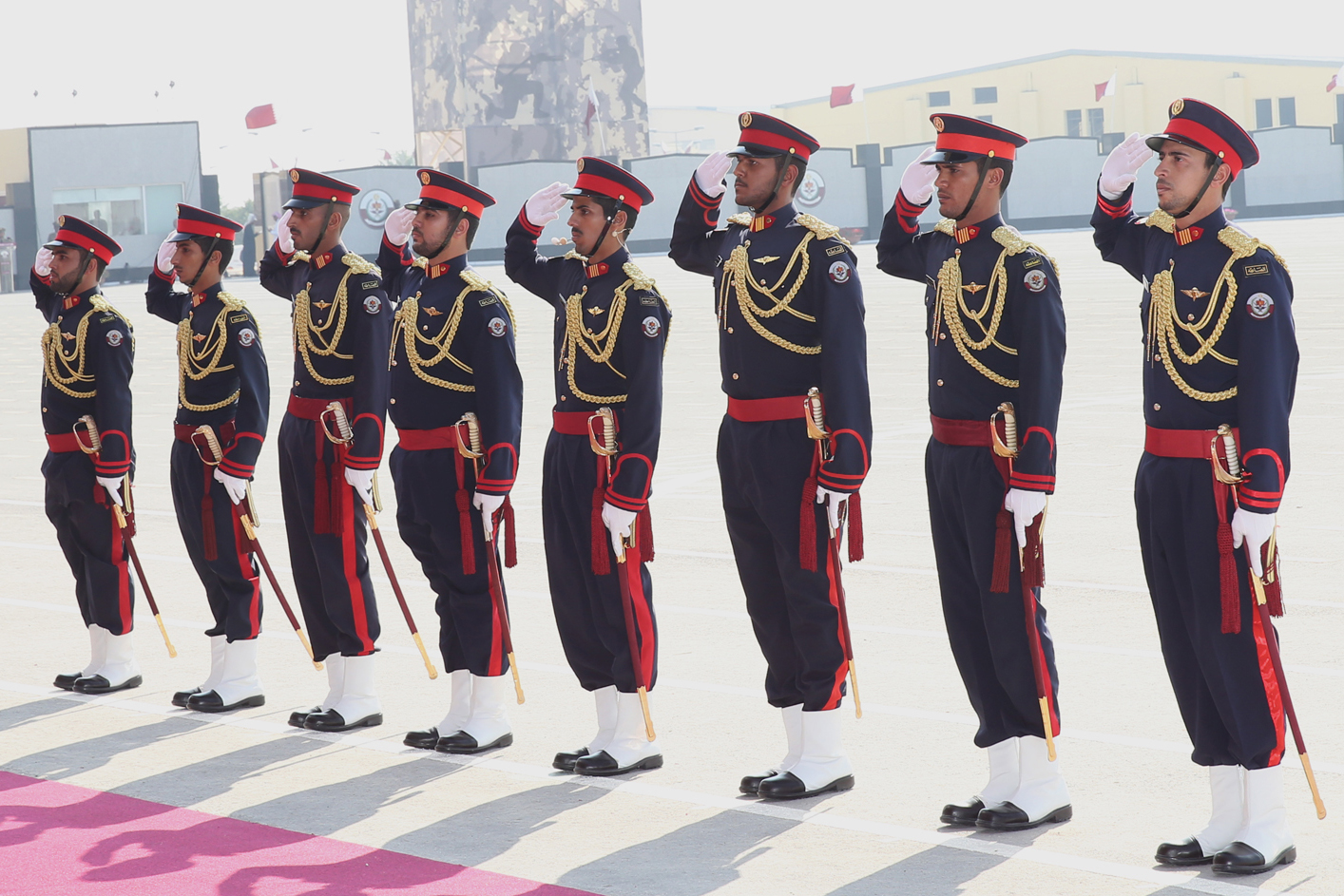 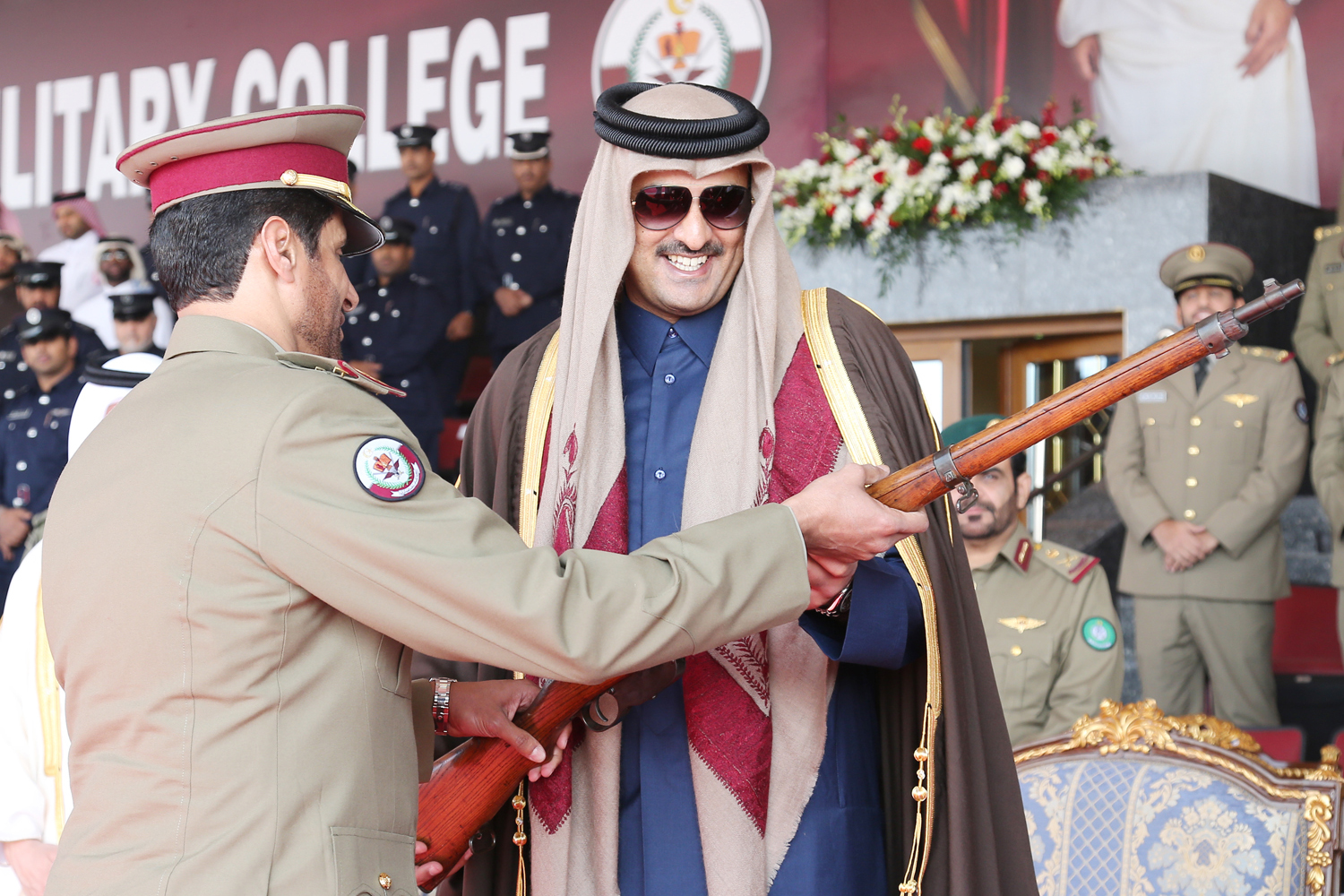 HE the Prime Minister and Minister of Interior Sheikh Abdullah bin Nasser bin Khalifa Al-Thani attended the graduation along with a number of their excellencies ministers and ranking officers in the Qatar's Armed Forces, the Ministry of Interior, and in military colleges of friendly countries.

The Qatari national anthem was played upon HH The Amir's arrival. After that, the commander of the parade came forward to request HH The Amir to review the graduates' parade.

Commander of the Ahmed Bin Mohammed Military College Brigadier Abdullah Abdulrahman Al Kaabi expressed his delight that HH The Amir Sheikh Tamim bin Hamad Al-Thani attended the graduation ceremony. Al Kaabi noted that the 12th class included 90 officer cadets for the Armed Forces, Ministry of Interior, Lekhwiya, Emiri Guard, and state security. He noted that the graduates received training in Qatar, Mongolia, Britain and France that helped elevate their spirits and strengthen their sense of belonging to the country and HH The Amir. Commander of the Ahmed Bin Mohammed Military College added that the experience will help the new graduates play their part in Qatar's renaissance.

Al Kaabi said that the college cooperated with a number of other colleges abroad. Some of them were Kuwait's Ali Al Sabah Military Academy and Britain's Royal Military Academy Sandhurst. The latter carried out training in Qatar last November. The Ahmed bin Mohammed Military College also worked on attracting high-quality cadres from different countries to provide the best service possible in terms of military academic programs and training techniques.

HH The Amir then honored Brigadier Hamad Ahmed Al Nuaimi, former Commander of Ahmed bin Mohammed Military College, in appreciation for his efforts in developing the college. HH The Amir then viewed a performance of the Pakistani military band, which is comprised of 52 military personnel. Afterwards, the graduates took the oath and the national anthem was player.