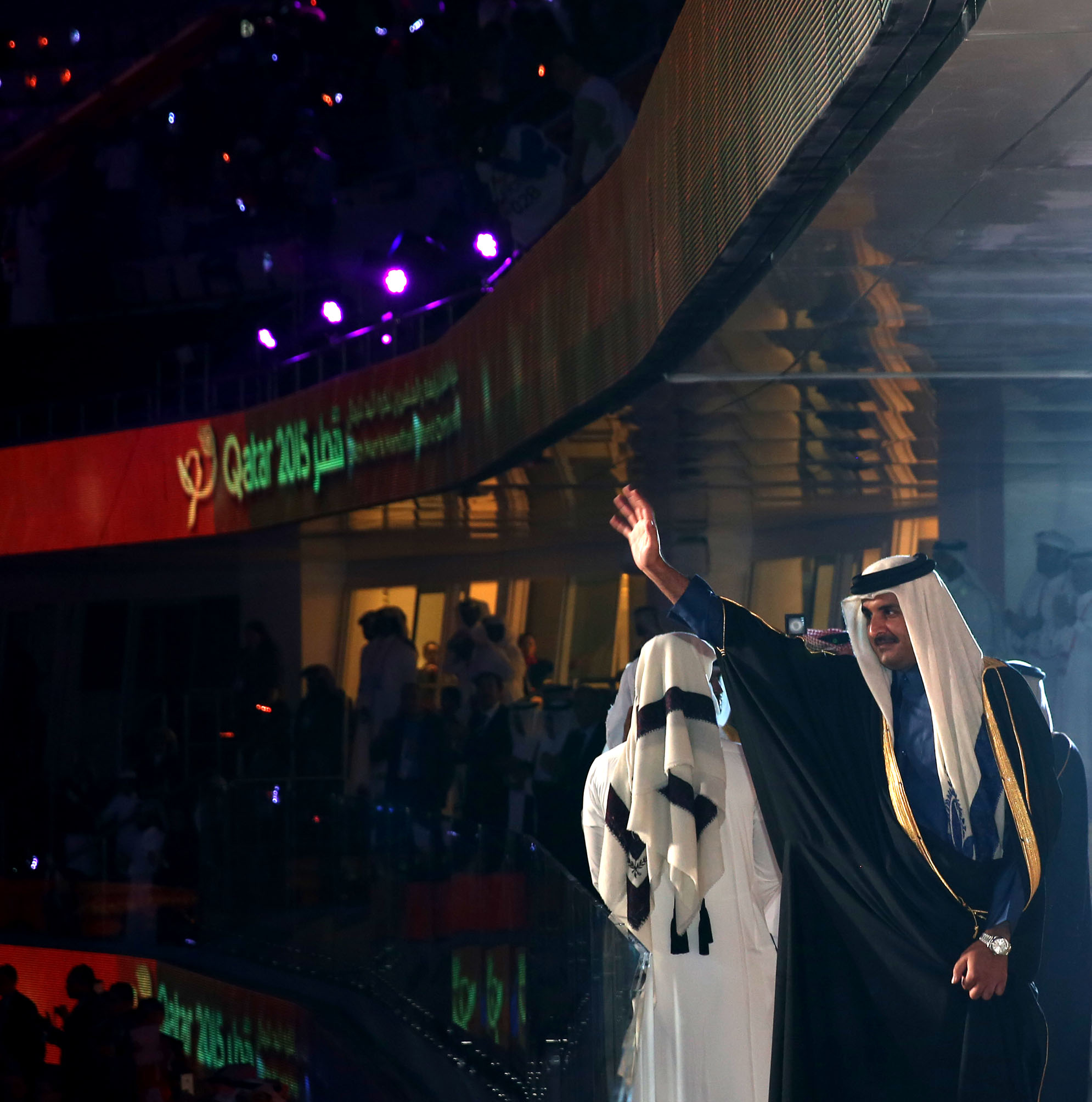 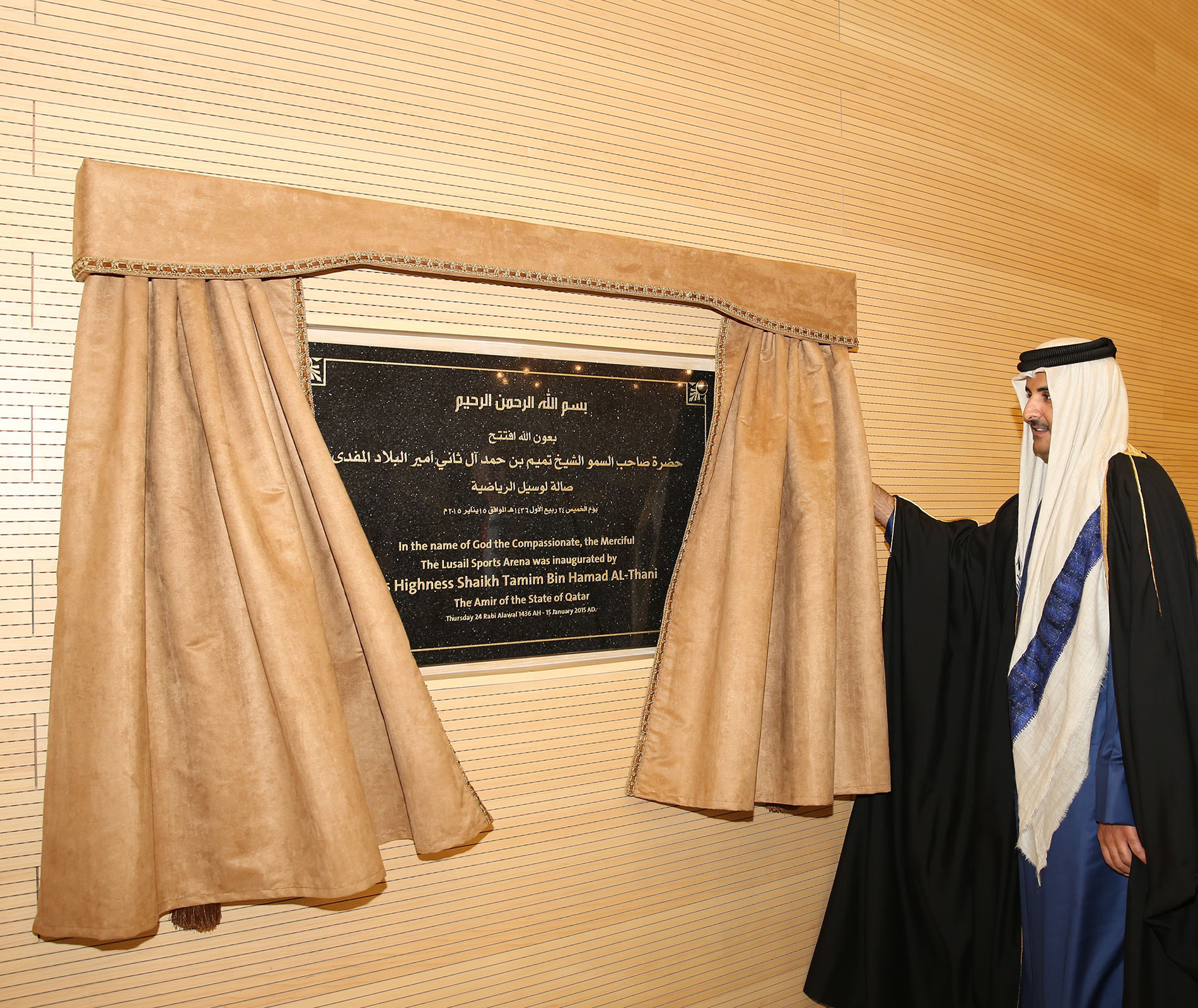 HH The Amir unveiling the curtain to officially mark the opening of the Lusail Multipurpose Sports Hall. 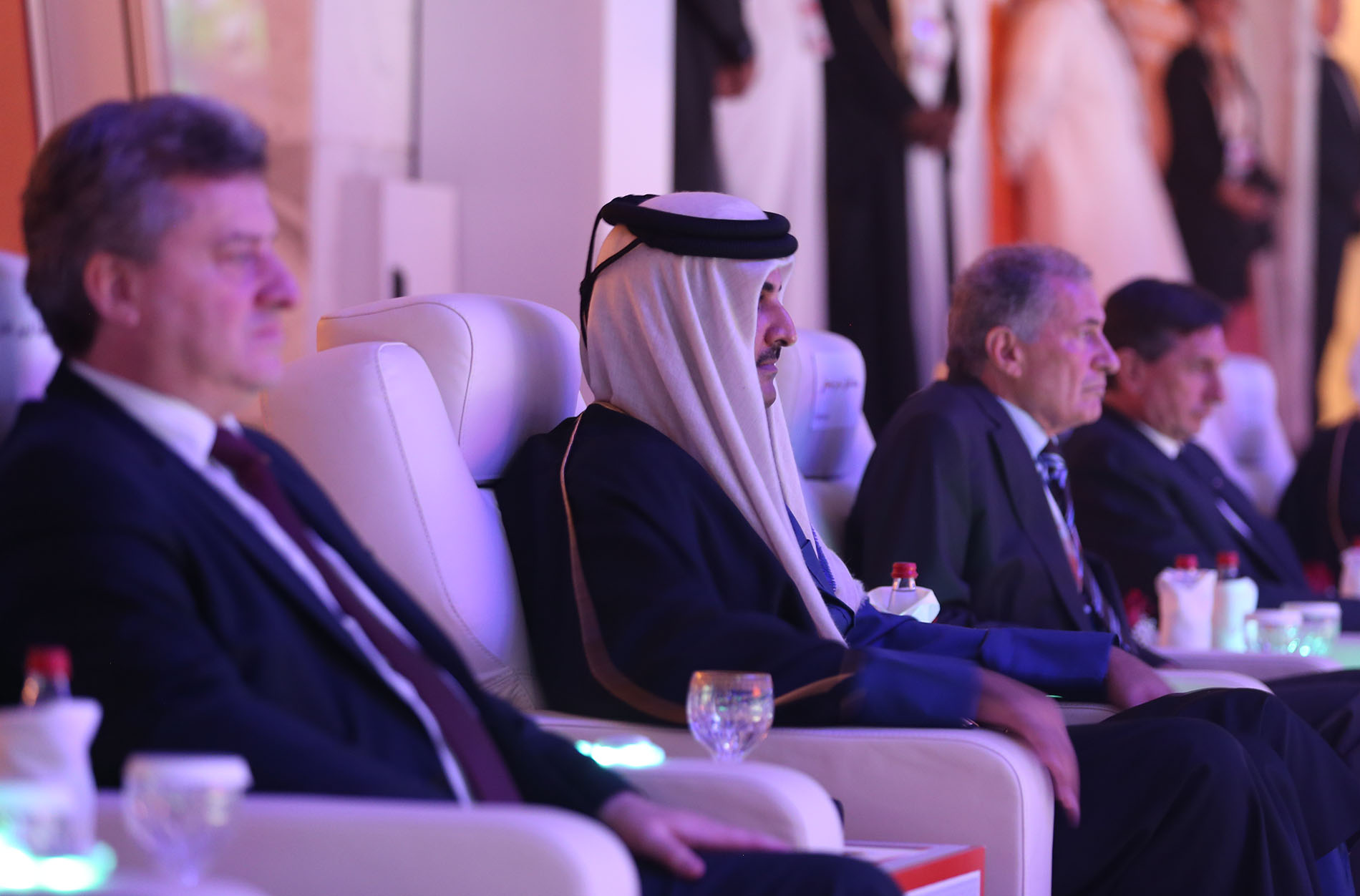 HH The Amir views parades along with participating delegations 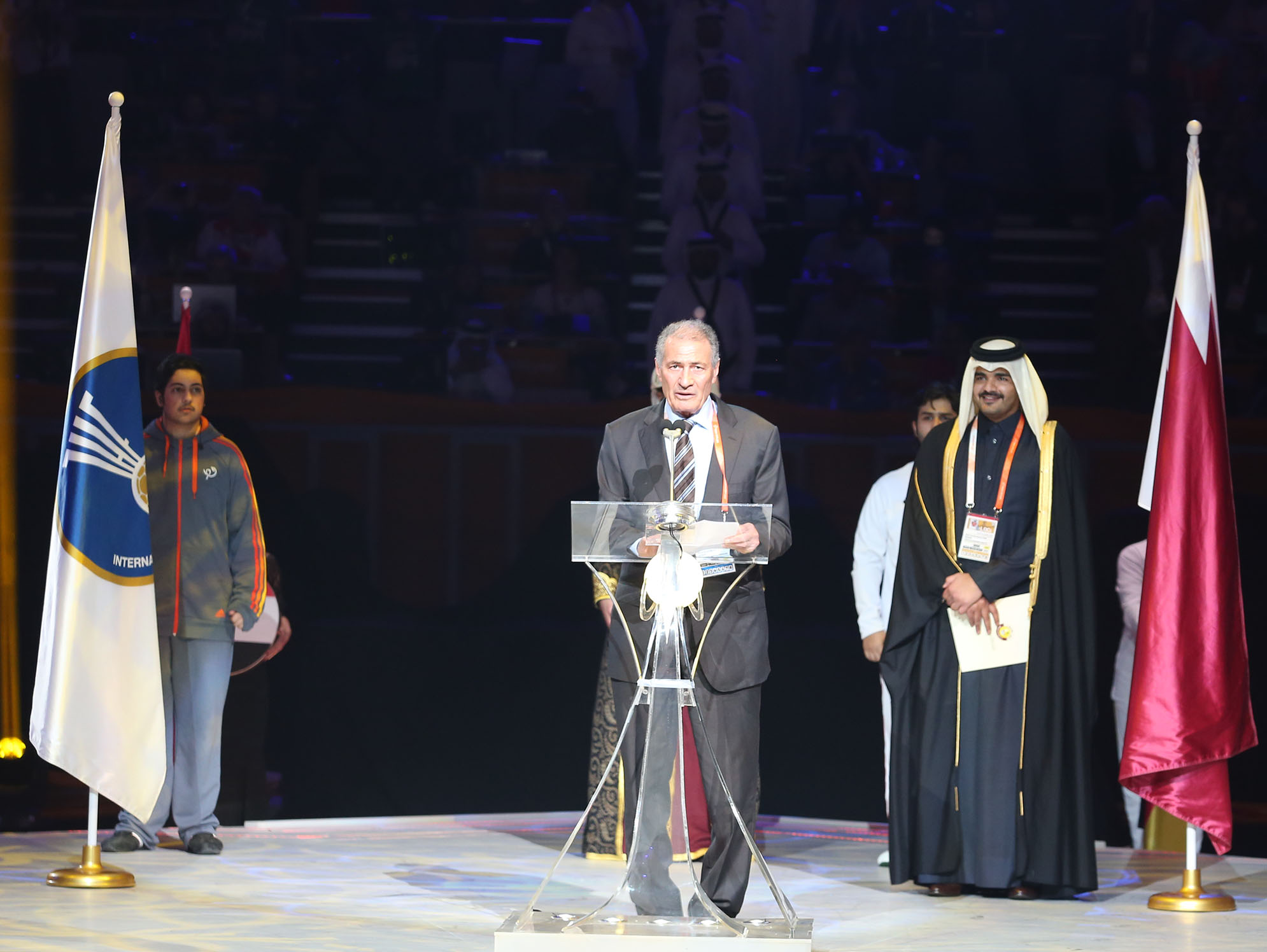 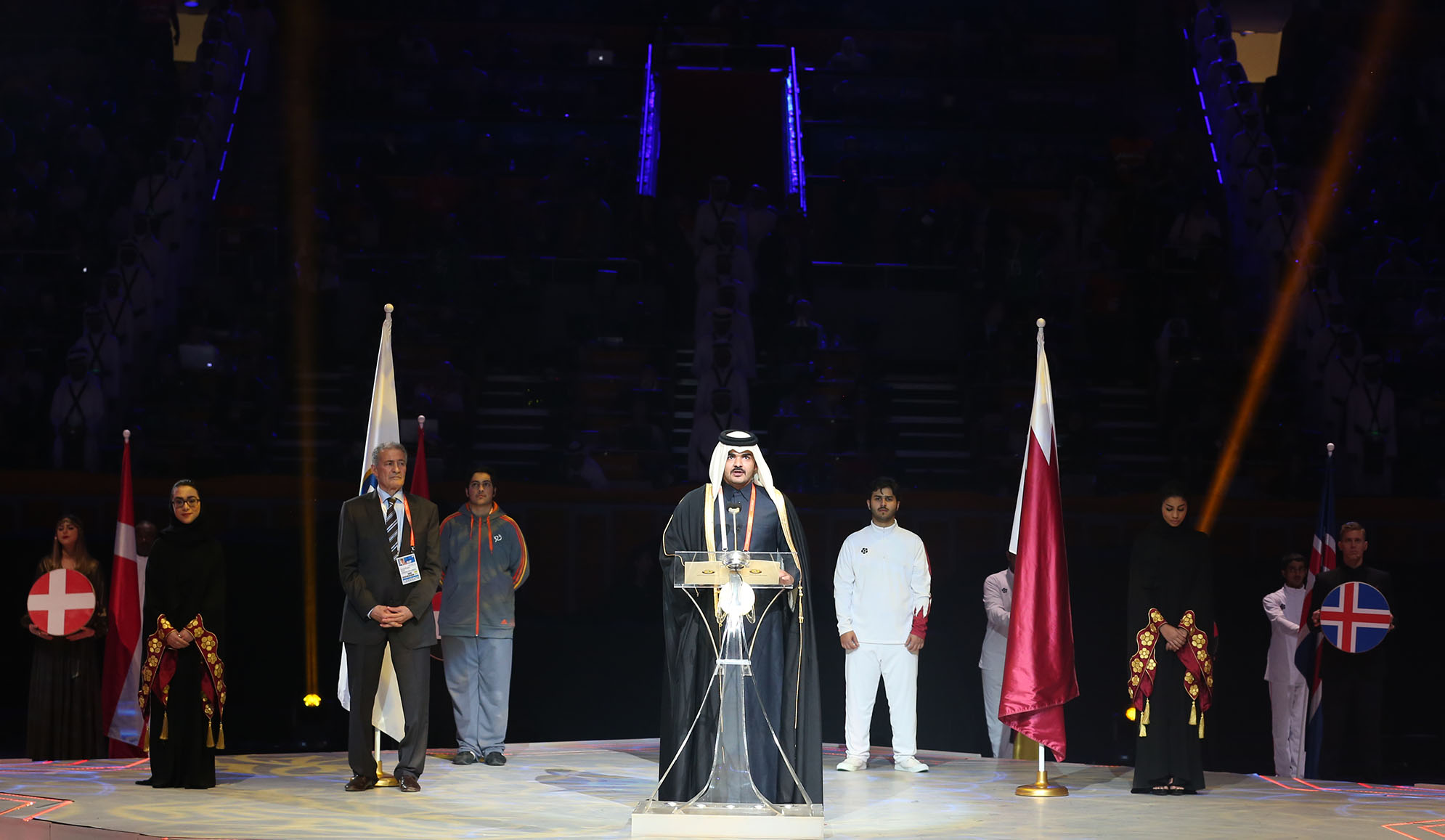 The ceremony was also attended by a number of the country's guests, in addition to their Excellencies Sheikhs, Ministers, Senior sports officials and mass of people.

HE Sheikh Joaan bin Hamad Al Thani, Chairman of the Organizing Committee of the IHF World Handball Championships requested HH The Amir to officially open the tournament in a speech in which he expressed his gratitude and thanks to HH The Amir for his unlimited support for sport in Qatar, where it comes within the pillars of Qatar's Vision 2030, which is to mobilize all potentials to create sports giant monuments of global quality standards, and directing local institutions and companies to support the sport and the athletes, and the fruits of that The State of Qatar has become an international sports destination that brings the peoples of the world in an atmosphere characterized by security, safety and competitive spirit of fraternity, HE Sheikh Joaan said.

HE Sheikh Joaan said that the proceeds from this tournament tickets sales will be allocated to support Education Above All's Global Programme - Educate A Child, out of concern of  Qatar in support of charitable projects, particularly  the childhood and education domains.

He said "we all endeavour to host this prominent sports event with opening of  the Lusail Multipurpose Hall to keep this event in unforgettable memory in the history of handball."

He welcomed the 24 participating countries to this championship and thank my colleagues; the presidents of continental federations, for organising the qualifications events. He  extended  his deepest appreciation and gratefulness to HH The Amir Sheikh Tamim Bin Hamad Al Thani for hosting this global event. We trust that it will be a remarkable championship. We also, thank HH The Amir for his endless support to Qatari handball game leading it to become a powerful game in the Asian level for all age groups. Qatar has spared no effort nor financial support to establish new sport venues for the championship which were all built as per international standards and at record time.For the first time in the history of handball world championships, education and awareness program is organised for the handball society including coaches, referees, administrators, doctors, and secretary generals of national committees as well as junior journalists from around the globe.Not to mention that 200 heads of States representing national associations and federations have invited members in the International Handball Federation, he said.

Then, HH The Amir attended part of the opening match between the Qatari handball team and the Brazilian national team.

Before the start of the ceremony, HH The Amir unveiled the curtain to officially mark the opening of the Lusail Multipurpose Sports Hall.