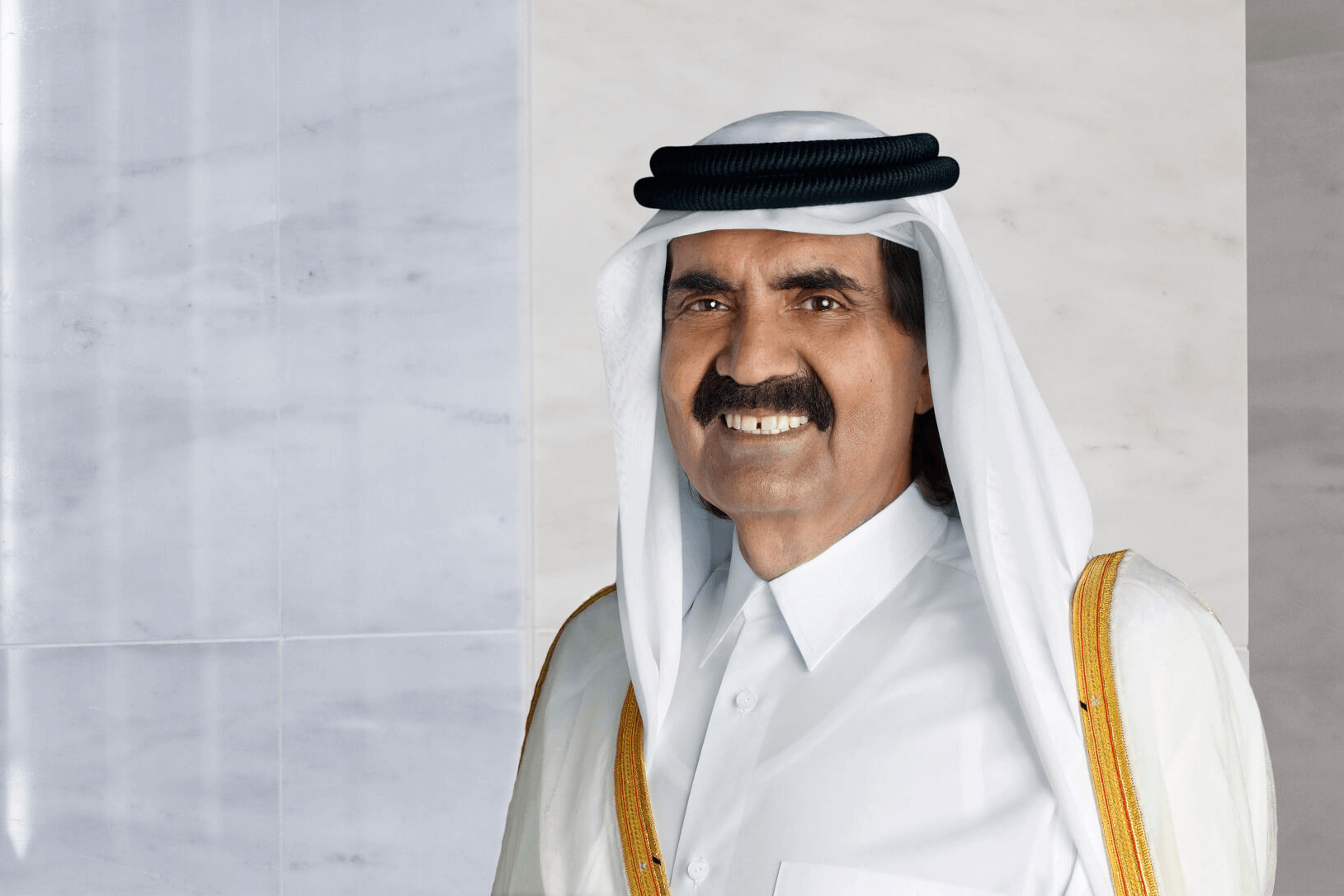 Former Amir of the State of Qatar, one of its iconic leaders, and the architect of its modern revival. During his reign, which witnessed massive economic, social and cultural development, the State of Qatar extended its status among the Arab and international community. The  GDP increased by more than 24 folds, and per capita GDP by about six folds, while gross value added in the hydrocarbon sector jumped from 11 billion to 403 billion Qatari Riyals.

During his tenure the country’s permanent constitution was promulgated, and “Qatar National Vision 2030”, which seeks to promote a drive towards a  knowledge-based economy, and transform Qatar into an advanced country capable of achieving sustainable development and ensuring  the continuation of a decent life for its people, generation after generation, was framed.

Sheikh Hamad Bin Khalifa Al Thani was born on January 1952 in Doha, where he was raised and completed his education. He then joined the British Royal Military Academy at Sandhurst.  After his graduation in 1971, he joined the Qatar Armed Forces where he was promoted till he reached the rank of Maj. Gen. He was credited as playing a pivotal role in developing the armed forces in terms of ordnance.

On 31 May 1977, he was appointed the Heir Apparent and Minister of Defence. On 10 May 1989, Sheikh Hamad was appointed Chairman of the Supreme Council for Planning, which was assigned the task of formulating Qatar’s social and economic policies.

Soon after His Highness assumed the reins of power on 27 June 1995 he embarked on forging development and reform plans and programs. His plans for reconstruction were comprehensive, thorough, dimensional and multifarious in approach leading to a quantum leap in the development of the country, thus triggering wider development that  encompassed  education, health, sports, culture, media and infrastructure. During his tenure, the country has seen immense progress in the economy and energy sector. The North Field gas production boomed, and liquefied natural gas exports started from it in 1996, resulting in a rapid increase in the country’s earnings. In 2006, Qatar became the largest LNG exporter in the world, and in 2010 its LNG production capacity reached 77 million tons per annum.

In October 2001 the Supreme Council for Economic Affairs and Investment was established under the chairmanship of His Highness to  oversee the economy, energy and investment affairs. This was done to diversify local and foreign investments to develop Qatar’s financial reserves and diversify public sources of income.
Among first decisions taken by his Highness after taking office was the establishment of “Qatar Foundation for Education, Science and Community Development” in August 1995 to support scientific and cultural drive in the country.

Then censorship of the local press was scrapped in October 1995, followed by the abolition of the Ministry of Information in 1998, to open broad prospects for the freedom of opinion and expression and kick-start a media thrive. The establishment and launching of Al Jazeera TV Channel in 1996 ushered in a new dawn in the Arab and international media and signified a landmark step forward for the region.

In 1996 Qatar began to introduce, at the behest of His Highness, democratic steps, such as holding the first election of Qatar Chamber of Commerce and Industry, followed by the first elections of the central municipal council  in March 1999, where women were granted the right to vote and  stand for candidacy for the first time in the history of Qatar.

On June 8, 2004 the first permanent constitution of the State of Qatar was promulgated- after a popular historic referendum held on 29 April, 2003 – to achieve goal of introducing the means of democratic governance of the State by approving a permanent constitution that lays down the basic pillars of the society, expresses for the popular participation in decision-making, and ensures the rights and freedoms of citizens.

Under the new Constitution the people are the source of power, and the governance was founded on a system of separation of powers and their collaboration.

The country during the reign of His Highness was widely opened up economically, as well as in terms of  development, civilization and culture, and has become a hub for political, economic, cultural and scientific conferences. Qatari diplomacy also played a leading role in conflicts resolution and containment in different parts of the world.

On December 2010, Qatar became the first Arab and Islamic nation to win the hosting of the 2022 FIFA World Cup, by virtue of the ambitious and non-traditional investment ventures pursued by the country under the rule of His Highness.

HH was awarded many decorations by Arab and foreign countries in recognition of his efforts in strengthening bilateral relations and promoting areas of cooperation between nations and peoples.

On 25 June 2013, His Highness Sheikh Hamad handed over the reins of leadership to his Heir Apparent Sheikh Tamim Bin Hamad.